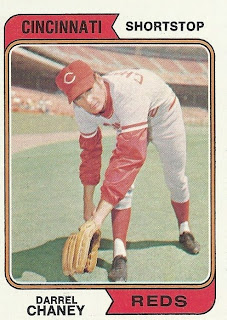 Darrel Chaney diligently shows us a backhanded stab at a grounder at a washed-out Candlestick. This card is a significant downtick from Darrel’s ’73 one, an action shot of him sliding into a base in which his helmet is dislodged revealing perfectly groomed hair. The plan going into spring training of ’73 was that he and Dave Concepcion would continue platooning at shortstop, Dave batting against lefthanders and Darrel against righties. Concepcion had hit under .210 the prior two seasons so until that point the two were pretty much a match offensively. But then Concepcion had a breakout spring training, leading the team in average and RBI’s and so while Darrel initially got his share of starts, his average couldn’t get much above .150 while Dave’s got quite good and Concepcion got all the starts. At least he did until a July injury ended his season allowing Darrel to get his time. But he still finished with an average about 100 points lower than Dave’s and so his time left in Cincy was spent largely on the bench or in late-inning shifts. Not exactly what he had in mind when he started playing.

Darrel Chaney was all-everything while growing up in Hammond, Indiana. A star quarterback, shooting guard, and shortstop in the big three sports, he was reportedly pursued by 35 D-1 schools including a few Big Ten ones for football. But Cincinnati picked him as a second rounder in the ’66 draft and signed him for about $6,000 and off Darrel went to the world of baseball. He had a good summer defensively in A ball but hit only .206 with little power. Then ’67 was a wash because just over a month into the season up in Double A Darrel got called into the military, missing the remainder of the year. When he returned to that level in ’68 he had a much better season, leading his team with 23 homers and 78 RBI’s, but hitting only .231 with a ton of strikeouts. Still, those numbers allowed him to get a spot on the Cincinnati roster the following year. That year he swapped time at short with Woody Woodward but all he seemingly brought up from his minors numbers was the strikeout total. So in ’70 he split time three ways with Woodward and Concepcion and got nearly as many starts at second as at short. He didn’t see nearly as much action but his average picked up a bunch and he got his first post-season time work in the Series. In ’71 the Reds threw the shortstop job at Concepcion and Darrel spent most of the season in Triple A where he hit .277 with less power but also half as many K’s as he had in ’68. Woodward was gone for the ’72 season so shortstop was all Darrell and Dave for most of the year. That time, though, Darrel proved better offensively as he flirted with .300 through late July, pulled his strikeout totals down a bunch, and then got the bulk of the post-season work at shortstop.

In ’74 Chaney did the reserve thing, hitting .200 in 135 at bats, mostly backing up at third which was still in transition before it would be taken over by Pete Rose the following year. That year Darrel upped his at bats and average to 160 and .219 respectively and really pulled up his RBI’s with 26, his most in a season to date. Though he got very little action that October he did get a ring. After the season he was sent to Atlanta for Mike Lum. With the Braves in ’76 Darrel got his first uncontested starting job and he responded by hitting .252 with 50 RBI’s in his nearly 500 at bats. Unfortunately he also led the NL shortstops in errors and the Atlanta infield was porous enough without his help. So over the next few years the Braves sought a better solution at shortstop and Darrel’s at bats gradually fell. In ’77 he hit .201 in 209 at bats; in ’78 it was .224 in 245 looks; and in ’79 it was .162 in 117 at bats. After being released at the end of that season he retired. He hit .217 with 190 RBI’s up top and .086 in his 19 post-season games.

After a year off in 1980 Chaney returned to the Braves and baseball for a two-year stint as an announcer. He then left to join Prudential Realty as an officer for community relations and relocation, which he did for about 22 years. He then founded a company called Prime Retail Services and also sits on the board of Major League Marketing Association, an advocacy group for former major leaguers and their images (in video games, etc.). He is also a motivational speaker and has his own website in that capacity. 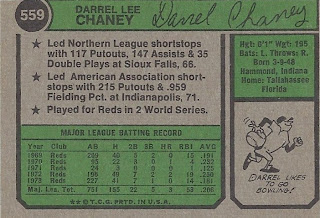 Darrel gets the defensive props in his star bullets and another bowling cartoon (I think that makes four in this set). He was a big religious guy so him hanging at the lanes with Bill Sudakis would probably have been fun.

These guys get linked by a colorful one: