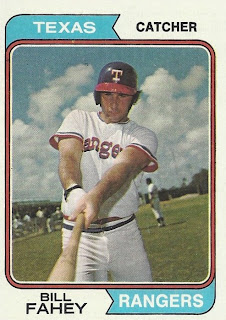 Here we have Bill Fahey on a very tilted field during spring training. Bill had nary an at bat for Texas in ‘73 and at this point in his career had already had three cards for his grand total of 127 at bats. But here he is as Topps and others expected him to take an active role in the Rangers battery for ’74. It didn’t quite work out that way as Bill would spend nearly all of ’74 in the minors as well, getting leapfogged by another highly touted college catcher, Jim Sundberg. Baseball could move fast sometimes. But though Bill spent the whole season in one spot it did have its ups and downs. He put up some pretty good numbers on offense and was an excellent defender in Triple A, good enough to be named team mvp that season. At least he did through early August, when a collision at home plate resulted in his breaking five ribs and puncturing a lung. Things would go like that for a while for him and it would take a few years for him to get a regular gig. But that would be for a different team in a different league.

Bill Fahey was Michigan all the way. Born in Detroit he grew up in a suburb there and was drafted his senior year of high school by Baltimore but opted for the University of Detroit instead. He then either did or did not transfer to St. Clair Community College, also in Michigan, but for sure played baseball somewhere in ’69. He was good enough to get drafted the following January by Washington and then signed to a bonus somewhere in the range of $40,000 to $50,000, all depending on the source. His first year in A ball was not too bad offensively and quite good on defense. In ’71 he moved to Double A where he was an all-star and then got into a few games at both Triple A and in DC. He then began ’72 in Triple A where his numbers included an OBA of .386 before moving up to Arlington in late July and then getting a bunch of starts down the stretch. He did well enough behind the plate but wasn’t so hot at it. So in ’73 the Rangers basically swapped Bill and Ken Suarez and Bill spent the whole season in Triple A. In ’74 he began the season in Arlington but with Jim Sundberg and Duke Sims getting just about all the starts, Bill was back in Triple A by early May. There he was an all-star for the second straight year while hitting .259 with 39 RBI’s in his 317 at bats. By ’75 Sims was done and Bill returned to Texas as Sundberg’s back-up and did a pretty good job despite almost never playing and suffering a broken hand that kept him out of action for almost two months. In ’76 the Rangers picked up John Ellis so he and Bill doubled on the back-up work. Those three seasons combined Bill only got 185 at bats, though he did hit a respectable .249 in them. By ’78 Ellis was getting the lion’s share of the back-up work – he was better offensively – and Bill was shuttered back to Triple A where he was now the second guy in the depth chart and hit .250 in his .212 at bats. After the season he was sent to San Diego with Kurt Bevacqua and Mike Hargrove for Oscar Gamble, Dave Roberts, and a bunch of cash.

In 1977 the Padres had picked up Gene Tenace as a free agent so it seemed as if Fahey was headed for more light back-up work since Tenace still had a pretty good bat. And ’79 kicked off that way with Bill getting some spot starts and late inning work. But by early August Tenace had to take over first base and Bill would get the lion’s share of starts the rest of the season. That must have made him pretty happy, but he paid for it. In one week of August he went all the way in a ten-inning, an eleven-inning, and a 19-inning game. He did super on defense and was a big surprise offensively as he hit .316 from his starting role the duration of the season. Overall he hit .287 on the year. In ’80 he split starts with Tenace, hitting .257 in 241 at bats, his most up top. In spring training of ’81 Bill was sold to Detroit. While there he would be injured every year and reprise his back-up role behind another catcher who rarely sat, this time Lance Parrish. In his three seasons with the Tigers Bill would hit .212 in just 156 at bats, spending a bit of time in ’83 in Triple A for rehab. He spent a considerable amount of time when he returned to Detroit that year as the bullpen coach and it would be the final year of his playing career. He finished with a .241 average and 83 RBI’s in his 934 MLB at bats and hit .265 in the minors.

In 1984 Fahey was named manager of Lakeland, Detroit’s A franchise in the Florida State League. He went 46-98 in what would be his only season as a manager. In ’85 he was a coach in the Texas system and then from ’86 to ’91 a coach up top for the Giants. After that it has been tough to see what he has done professionally, though he was very active in the Dallas suburb of Duncanville where he has resided since he played for Texas. There he had two sons, one of whom, Brandon, grew up to play ball for the Orioles. 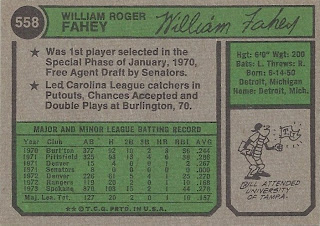 So Bill gets some good star bullets on the back. During spring training of ’71 his manager Ted Williams said Bill would be an All-Star by ’75; not exactly the way things turned out. Since I have not been able to find definitively which school he was actually in when drafted by the Nats, I have no comment on how the University of Tampa fit into everything.

This one I wasn’t expecting, but here goes:

Don Mincher was a slugging first baseman from the Sixties to the early Seventies who won a pennant with the ’65 Twins, got props from Jim Bouton in “Ball Four”, and finished his career up in ’72 as a pinch hitter for Oakland, finally winning a Series.
Posted by wobs at 11:59 PM