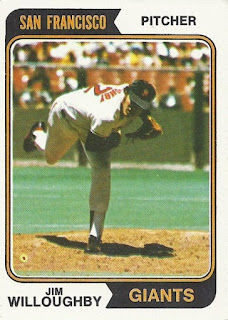 The subject of this post has lots of things in common with the subjects of the other recent posts. Like Denny Doyle, Jim Willoughby gets photographed at Candlestick and would later play for the ’75 AL Champion Red Sox. Like Von Joshua, Jim grew up in California and spent the early part of his career on the west coast. And Like Sam McDowell, Jim pitched for the Giants and would develop a pretty serious drinking problem, one that required rehab. But that last bit was a couple years away and Jim was having enough issues with a ’73 season that went a bit awry. As a rookie in ’72 he had pitched his way into the San Francisco rotation and stayed there to start the following season. But by mid-May he was 3-3 with a 4.55 ERA and he would then go over two weeks without getting into a game. He claimed the problem was from manager Charlie Fox insisting he throw overhand to bring more heat to his game, but Jim was normally a control guy who liked to throw three-quarters or even side-arm. The experiment seemed to not work and he then got moved to the pen, mostly as a long guy, but it didn’t help too much as his ERA remained toppy, his record got worse, and he only recorded one save. Things would eventually get better for Jim down the road, but that would be on a whole other team in a whole other league.

Jim Willoughby could throw heat while pitching high school ball in Gustine, California, but he preferred to be on the receiving end in his favorite sport, football. He was all set to go to Berkeley on a scholarship but when the Giants drafted him in ’67 they put him in a program that allowed him to go to school, so while he couldn’t play ball there, he could still pursue a degree. He was a smart cookie so he took engineering classes and in the meantime that summer he put up pretty good numbers in Rookie ball. His first few seasons he would average around a strikeout an inning, which he did the next two years in A ball and which may have got everyone stuck on the notion that he was a power pitcher. His ’69 at that level was awfully good so the following year he was moved up to Triple A and he had two good seasons in the rotation at that level. He got a few MLB innings in some late games in ’71 and then in ’72 returned to Fresno. Though his ERA there got spiky that summer, he came up to San Francisco in August and had a real nice run in his eleven starts, completing seven of them, including one that went eleven innings. But in spring training they tried to turn him into a power guy and ’73 was pretty messy. Unfortunately that run continued into ’74 in what was nearly a re-run of the prior year: a few not great starts followed by long work out of the pen. By early June he was only 1-4 with a 4.65 ERA and he was shortly thereafter sent down to Triple A. Back in the rotation at that level, he was still being told to pitch overhand and the results weren’t so hot with a 6-6 record and a 5.66 ERA in his 15 starts. After the season ended he was sent to St. Louis for infielder Tom Heintzelman.

The Cardinals kept Willoughby in Triple A in ’75, which was probably a bit demoralizing to him, but they did do one thing right by him and left his delivery alone. Back throwing from his preferred angle Jim again started 15 games, but this time with better results: 8-6 with three shutouts and a 3.24 ERA. A bit like future teammate Denny Doyle, Jim was then named as the “later” guy in an earlier trade that had sent Mario Guerrero to the Cards in April, and early in July he was sent to Boston. The Sox pulled him up right away since they needed a healthy right-hander in the pen. While Jim’s first outing was a little rough, he fixed things pretty fast, getting five saves and a win in the first six games he finished. He went on to go 5-2 with eight saves on a 3.54 ERA in his 24 games. Like Doyle he was a big help the second half of the season, and while he got shut out of any playoff work, he had a nice Series, going 0-1 despite not giving up an earned run in over six innings. When he returned in ’76 he took over the closer role and had a sort of bi-polar year, going 3-12 but with a team-high ten saves and a team-best 2.82 ERA. He gave up an unusually large amount of walks that season for him – 31 against 37 K’s – but twelve of them were intentional. It was about then that he took up with some of the free thinkers on the team: Bill Lee; Rick Wise; Fergie Jenkins; and Bernie Carbo. The group as a whole was fond of drugs and to an extent booze (except probably Wise) and Jim would enjoy both of them in excess.  Jim has a SABR biography which provides a bunch of background for this post and on it it says he never was stoned on the mound and that he was stoned a few times on the mound, so take your pick. Regardless, in ’77 the Sox picked up Bill Campbell from the Twins as a free agent and between Campbell’s taking over the closer role and the emergence of rookie Bob Stanley, Jim’s innings cratered as he went 6-2 with a couple saves and a 4.94 ERA as mostly a set-up guy. Just prior to the ’78 season he was sold to the White Sox. Unfortunately for Jim the era of the Southside Hitmen was pretty much a one-year phenomenon and he split the closer role with Lerrin LaGrow in a year much like ’76 where his record of 1-6 wasn’t indicative of a pretty good season with 13 saves and a 3.86 ERA. After the season he went back to the Cards for outfielder John Scott but didn’t make it out of ’79 spring training. He signed a minor league contract with the Cubs and spent most of ’79 on the Triple A roster of Chicago and the Pirates, going a combined 5-3 with ten saves and a 3.93 ERA. He did get promoted to the eventual Series champs late that year but didn’t get any mound time. In the following winter he pitched in Venezuela to try to take another stab at the top, but while there he had a bad incident of insulin shock – he didn’t even know he was diabetic – and after spending a bit of time in a coma decided maybe the baseball life was done. He finished with a record of 26-36 with a 3.79 ERA, eight complete games, a shutout, and 34 saves. In the minors he went 73-56 with a 3.72 ERA.

Willoughby returned to the Boston area after his Venezuelan experience and for a couple years hosted a sports talk show there.  In early ’81 he also began coaching baseball at nearby Suffolk University but was basically forced to resign that April after a tantrum he had didn’t go over too well with the school’s athletic director. The team was 1-4 under him. He then moved back to California where he became a carpenter and eventually a contractor, where he has specialized in building homes in the hills. 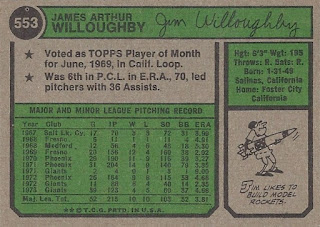 Jim gets the minor league star bullet props. He is part Native American and there weren’t too many of those in baseball then. His rocketry interest stemmed from his undergrad work in engineering. As of the publication date of the SABR bio he’d been clean and sober for over 20 years.