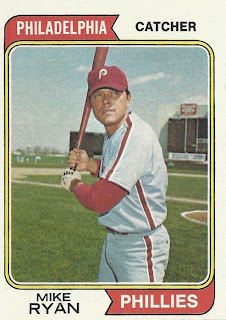 Like Jack Aker of two posts ago, Mike Ryan gets his final card pictured in a uniform he would not be in in 1974. In January of that year he was traded to the Pirates for Jackie Hernandez, who is ironically the subject for the next post. Mike’s at bat totals had been moving south since ’70 and in ’73 with new guy Bob Boone behind the plate nearly all the time, Mike’s total dropped below 100, though he did put up his best average in Philly, with his .232. Mike’s specialty was defense and he managed to build a pretty long career despite finishing with an average below .200. Here he poses at Shea with an unusually dark bat. I have one that exact color and it’s made out of bamboo, which I think is pretty cool. I don’t think they were using bamboo back then in bats. If they were, maybe that helped explain Mike’s average.

Mike Ryan grew up in Haverhill, Massachusetts, not terribly far from the New Hampshire border. In high school he played baseball but the Catholic school he attended had no athletic teams so Mike played sandlot ball. In ’60 he was part of an all-area team that played in a tournament held at Yankee Stadium and it was there Mike was discovered, signing late that year with his home-state Sox. The following year he hit only .185 in D ball but fielded quite well. He remained at that level in ’62, led his league in both putouts and assists, and boosted his numbers pretty considerably to .215/10/49 with a .353 OBA, though he did also K a ton. The next two years were spent in Double A where he continued his excellent defense and boosted his numbers somewhat. In ’63 he had a .229/10/45 year though with 106 K’s in just 388 at bats; in ’64 it was .248/5/34 and though his power numbers fell he also more than halved his strikeouts. He then got called up to Boston in October and had a great debut, knocking in and scoring a couple runs. Unfortunately on one of his scores, he tore a ligament in his knee which prompted a slow recovery the following year. He did begin the season on the Sox roster but after not hitting crazy well got moved to Triple A where he hit .236 with 19 RBI’s in 161 at bats before returning to Boston.

In ’66 Ryan got the starting nod and turned in some pretty good defense, though he gave up a ton of steals. He also raised his average a bunch though that wasn’t saying too much. In ’67 the Sox brought in Dick Williams and he and Mike didn’t see eye-to-eye on pitch selection all the time. So while Mike split games pretty evenly with Bob Tillman and Gerry Moses, when the Sox picked up Elston Howard late in the year, Mike got to watch the rest of The Impossible Dream season from the bench. He improved significantly on his runners caught that year and managed to get a couple Series at bats. After the season he was traded to Philadelphia for Gene Oliver and Dick Ellsworth. That first season of ’68 he split time behind the plate with Clay Dalrymple and while his offense was nasty bad he picked off a pretty nice 58% of the runners who took off on him. In ’69 Clay got sent to Baltimore, leaving Mike the starting catcher role and he turned in his biggest offensive year with 12 homers and 44 RBI’s. Prior to the ’70 season the Phillies acquired Tim McCarver as part of the Curt Flood/Dick Allen deal and McCarver was named starting catcher. But he got hurt in an early game against the Giants, breaking his hand on a foul ball. Ryan was back in the starting role, but it lasted less than a game as he got steamrolled at the plate by Willie McCovey and broke a finger. The Phillies would get so desperate for catching help later that season they had to pull Doc Edwards out of retirement. For ’71 McCarver was back and Mike played behind him that year, John Bateman in ’72, and Boone in ’73, getting not too many at bats. He finished things up with batting .100 in only 30 at bats behind Manny Sanguillen and retired at the end of the ’74 season. Mike had a .193 average with 28 homers and 161 RBI’s for his career and went o for two in his Series at bats. He had a .991 fielding average and caught 44% of the guys that tried to run on him, way better than league average.

Like Hal McRae Ryan moved directly into coaching. He managed in the Pitssburgh system from ’75 to ’76 and then returned to the Philadelphia one for many years, managing (’77-’78); coaching in the minors (’79); and coaching in Philly (’80-’95). His managing record was 236-316. He retired after his Philadelphia coaching days ended and lives in New Hampshire. 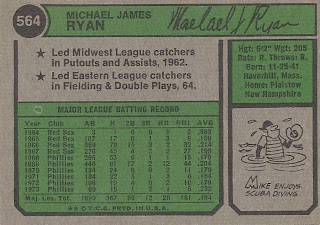 Not surprisingly Mike’s star bullets are all defense. Nicknamed “Irish” he also likes antiques according to a cartoon on another one of his cards. According to Mike’s SABR bio, he picked those two up from his wife.

I forgot all about this guy while figuring how to make this one short: