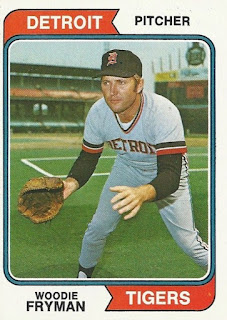 Now this is Comiskey Park. See, artificial turf and that circle on the scoreboard that will one day be a Coke sign. Woodie Fryman looks like he’s ready for battle in a wrestling pose. He should be: his ’73 season bore too much resemblance to the first half of his ’72 one and not enough to the second half. Woody was the AL version down the stretch of that ’72 season of what Fred Norman was for the Reds in ’73 (did every year have one of those back then?). Acquired on August 2nd of that year – on waivers no less – all Woodie did was go 10-3 in his 14 starts the rest of the way with a 2.06 ERA to lead the Tigers to the East Division title. He then had some hard luck in the playoffs – 0-2 with a 3.65 ERA in his two starts – but still had enough panache a year later to get a “5” card in this set. But ’73 was no follow-up. With a fast-declining team behind him and way too many homers given up – 23 in his 170 innings – Woodie reversed his Detroit record by 14 decisions and saw his ERA skyrocket. ’74 would be a bit of an uptick but things would go right when he got back to his old league in a couple years. Woodie is 33 in this photo. Sam McDowell was about 30 in his. Woodie looks about ten years younger than McDowell. Life on the farm had its benefits.

Woodie Fryman has such an old-timey baseball origin that it seems his career should have begun 50 or 60 years before it did. A lifetime resident of Kentucky, he was born in Ewing and played some ball in school until he was around 13. Expecting to be a farmer as his dad was, he dropped out of school so that he could work full-time on a farm given him and his older brother by their dad. He did play ball on weekends, mostly as a shortstop, and by the time he was a young man in the mid-Fifties had joined a local semi-pro team called the Flemingsburg Aces, for whom he became a pitcher of some local renown. He would regularly win over 20 games a year against just a couple losses and in one game supposedly struck out 32 guys in 15 innings. He got visited by a few teams around 1960 but the salaries and bonuses he was offered were less than he was making on his farm. But in ’65 a government subsidy on tobacco products ended and with the prospect of potentially lower farm income, Woodie got a local tryout with the Pirates. He was not offered much money but when his dad promised him he would come back to his allotted acreage, Woodie figured he had nothing to lose and signed. To make the signing more palatable to management the scout who signed him moved his birthdate forward a few years so the new kid was 22, though he was actually already 25. But once he got started Woodie worked fast. He went 3-1 with a 1.50 ERA his first six games in A ball and was then called up to pitch a mid-season exhibition game against Cleveland in which he pitched three innings of shutout ball with five K’s. He returned to the minors, this time to Triple A, where he went 0-3 in six starts but put on less than a runner an inning and had a 3.71 ERA. It was his final stint in the minors.

Fryman finished the ’65 season in Pittsburgh and though he didn’t get into a game, he did learn a pickoff move and a change-up from coach Clyde King. He then began his rookie year of ’66 in the pen and from there didn’t give up a run until his seventh game. Shortly thereafter he threw a complete game win in his first start and by the All-Star break he was 8-3 with a 2.30 ERA and three straight shutouts, including a one-hitter against the Mets. He cooled off the balance of that season but his numbers were still good enough to make the Topps Rookie team that year. ’67 would nearly be the prior year in reverse as Woodie was only 0-3 with a 6.75 ERA by the break after missing a month with an injured arm. But he improved the second half to go 3-5 with a 2.85 ERA. After the season he and three minor leaguers – one being Don Money – were sent to the Phillies for pitcher Jim Bunning. Woodie’s first season in Philadelphia was another streaky one as by mid-June he was 10-5 with a 1.61 ERA to nab an All-Star nod but was only 2-9 thereafter. In ’69 his ERA rose a ton as his record moved to the losing side and a decent bounce in ’70 was arrested by an elbow injury that made him miss all of August and pitch sparingly after that. In ’71 he spit time between the rotation and the pen, recording a couple saves. His nasty start in ’72 led to a trade and another bipolar season when he revived in a big way for Detroit. ’74 would be a tad better than ’73 as he went 6-9 with a 4.32 ERA in less innings. After that season he returned to the NL, going to Montreal for pitcher Tom Walker and catcher Terry Humphrey.

As in the second half of ’72, the movement of Fryman to another league initially went quite well. Back in the rotation for the most part, Woodie went a combined 22-25 with a 3.35 ERA and five saves for a team that was 133-191 during that stretch. In ’76 he was named to his second All-Star game. That following winter Cincinnati was worried that their 34-year old first baseman, Tony Perez, was getting too old so they packed him and reliever Will McEnany off to Montreal for reliever Dale Murray and Woodie, age 37. While initially things with the Reds seemed fine – Woodie had a 2.25 ERA in spring training and was named Opening Day starter – he soon had a falling-out with Sparky Anderson and after going 5-5 with a fat ERA the first three months he retired in early July to his farm. Coaxed back to baseball with the promise of a trade, after the season he went to the Cubs with the ever-itinerant Bill Caudill for Bill Bonham. While Chicago wasn’t exactly a fix – 2-4 with a 5.31 ERA in nine starts – a June trade back to Montreal for outfielder Jerry White got things going. He finished the year 5-7 with a 3.61 ERA in the rotation and from then on it was all relief. From ’79 to ’82 Woodie got to pitch for his first consistent winner and went a combined 24-17 with a 2.79 ERA and 46 saves, the bulk of that time in his Forties. He got some more post-season time and went 9-4 with 12 saves in ’82. But in his first game of ’83 Woodie’s shoulder snapped and after a couple bad attempts to pitch later that season he was done. He finished with a record of 141-155 with a 3.77 ERA, 68 complete games, 27 shutouts, and 58 saves. In the post-season he was 0-2 with a 6.14 ERA in four games.

Not terribly surprisingly Fryman returned to the farming life in Kentucky upon his retirement. He continued doing that through his mid-Sixties when Alzheimer’s hit him and he had to slow down a bit. He passed away from a heart ailment in 2011 at age 70. 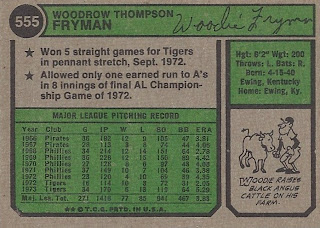 Topps gets pretty current with Woodie’s star bullets. There’s another farm reference in the cartoon. He also raised corn and soybeans as well as tobacco. Interestingly he never smoked or did chaw.