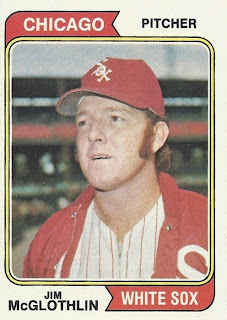 This is the second final card of a player in a row and that hasn’t happened in this set for a long time. Jim McGlothlin had to be a very recent arrival in Chicago when this photo was taken as he wasn’t traded there until the end of August. He wouldn’t pitch terribly much once he got there, throwing 18 mostly relief innings in September. He would not make it out of spring training in ’74 with Chicago so this card contains all his MLB stats and by the time of the card’s issuance he would be done as a player. But the true tragedy for Jim was that about a year later when he was in Florida visiting various spring training sites he got sick and quickly shed about 45 pounds. The initial diagnosis was stomach cancer and Jim, who became a full-time farmer in Kentucky once his career ended, did not have any health insurance. So to help him out his former teammates on the Reds held various fund raisers for his medical expenses. I was never a fan of those guys back then but that was an awfully sweet thing to do. Jim had a brief recovery but later in the year he would get sick again – leukemia was finally diagnosed – and just before Christmas of ’75 he would pass away. Pretty sad stuff.

Jim McGlothlin was born and raised in a suburb of Los Angeles and was a pitcher of enough renown at Reseda High School that a local paper called him invincible his senior year. He was signed by the Angels after a summer tournament and began his career in ’62 in D ball where he went 13-5 with a 2.79 ERA and lots of heat, striking out 165 in 129 innings. In ’63 he began the season in Triple A where he went 5-6 in 15 games. But his ERA got fat and the second half of the season he moved to Double A where his numbers actually got worse. He spent all of ’64 at the higher level in Hawaii where he went 5-10 as a starter while knocking a run off his ERA to 4.33. In ’65 he had a big season in Seattle, the new California Triple A spot, going 14-8 with a 2.55 ERA, before moving up top in mid-September. He lost all three of his starts for California but pitched pretty well. In ’66 he made the Angels roster in camp and spent the first couple months as a spot guy, throwing pretty well until a couple sloppy games in late June that got him returned to Seattle where he again put up over a K an inning and went 3-3 with a 4.34 ERA in his twelve games.

In ’67 McGlothlin again made the California roster in camp, this time as a member of the rotation. He was having an excellent season and from late May through late July his ERA never topped 2.00. He’d been hit in the hand by a comebacker in late May but shortly thereafter threw three straight shutouts. By late July he was 9-2 with a 1.76 ERA and a ticket to the All-Star game in which he threw two shutout innings. But in a game earlier that month he was nailed in the eye by a liner and the rest of the way went only 6-8 with an ERA of nearly 5.00. But the whole season was quite good and he finished leading the AL with his six shutouts. In ’68 and ’69 he was a victim of the team’s anemic hitting and during that time went a combined 18-31 though his ERA was roughly on par with the rest of the league. In November of ’69 he was sent to Cincinnati with Pedro Borbon for Alex Johnson and Chico Ruiz.

True to form, McGlothlin’s first season in Cincinnati was a streaky one.  By early July he was 11-4 with a 2.79 ERA. Then his knee took a shot off of – of course - a comebacker and the rest of the season he was 3-6 with a 4.85 ERA. He got his first Series action in a start that October. In ’71 he missed a couple starts with an eye infection and despite an improved ERA, like the rest of the team he had a tough time matching his ’70 numbers. In ’72 he put in a bit more pen time and most of the season fought a high ERA though he was able to finish with a winning record and some more post-season work. But in ’73 his control went south in a big way and splitting time between the rotation and the pen he was never able to get a good rhythm. He was sent to Chicago for Steve Kealey and pitched his final ball that season. Away from the stats on his card he recorded 36 complete games, eleven shutouts, and three saves (all in ’68). In his three post-season games he had no decisions with an 8.64 ERA in eight-plus innings. He’d gone 41-36 with a 3.61 ERA in the minors. 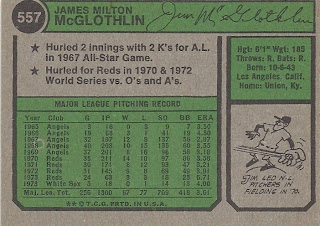 Jim had a perfect fielding average in ’70, something he also pulled off in ’73. One of his nicknames was “Red”, appropriate for the face of his last card because that color is everywhere on it.

I don’t think there’s anything wrong with using Mr. Kirby again, another pitcher who passed away at a young age: