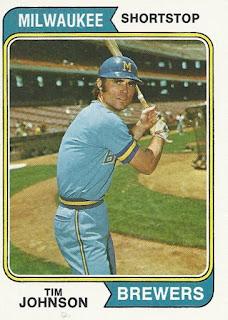 OK, so when I first looked at this card I thought Tim Johnson was photographed at Comiskey and I am pretty sure that guy in the background is wearing a red helmet or hat. But between about ’72 and ’75 Comiskey had a turf field – see the next card – so it ain’t there. Then I thought it might be Oakland, but I do not believe Oakland had the breaks in the wall above the first level of seats, plus the red hat/helmet thing wouldn’t work. Cleveland? That stadium had big vertical poles that I don’t see and I believe only two levels of seats and there appear to be three here. So I’m a bit lost placing this shot. But it is for sure the first rookie card we have had in a while. The Brewers of ’73 had a whole new keystone combo in Pedro Garcia at second and this guy at shortstop. The ’72 regulars were Ron Theobald and Rick Auerbach. Neither of them hit crazy great – though Theobald had a pretty good OBA – and Milwaukee wanted to get more out of its middle infielders. Theobald got released during ’73 spring training to make way for Garcia but shortstop was a bit messy. Auerbach didn’t have enough defensive props to keep the gig and so newly acquired Don Money was supposed to take over. But events conspired to have Money go full-time to third base and manager Alex Grammas engineered a trade: Auerbach to the Dodgers for Johnson, who’d been managed by Grammas in the minors. After the trade Jim pretty much took over the shortstop spot, hitting close to .260 his first month. He would tail off offensively but he had better range than Auerbach and he did well enough to claim the shortstop spot on the Baseball Digest rookie team. Still, he wasn’t the permanent answer to the team’s shortstop issue; the next guy was.

Tim Johnson was born in North Dakota and at some point relocated to California, where his dad owned and ran his own bar/restaurant. There he grew up in South San Gabriel and played ball at Montebello High School. He did not declare for the draft upon graduating because he wanted to play summer ball for his Connie Mack team, the Superior Pontiac Firebirds. That team won its regionals in both ’66 and ’67 and after it lost in the states Tim was signed by the Dodgers to a pretty decent bonus. His career began in A ball the following year where he didn’t hit too well – except for one game – but was already earning a reputation as a slick fielder. The next two years he moved up to Double A Albuquerque, the team managed by Grammas. That was also the year he began his military hitch as a Marine reservist, eventually reaching sergeant status as a mortar instructor. He would spend parts of the next six years in the Marines. After topping out offensively in ’70 he moved up to Triple A Spokane in ’71 where his average was a bit of a disappointment. LA had lots of promising young shortstops – Bill Russell, Bobby Valentine, Lee Lacy, and Ivan DeJesus – and so in ’72 Tim was pushed back to Double A. His hitting didn’t exactly recover so after beginning the season well back in Triple A in ’73, when Grammas and the Brewers came calling, LA sent Tim to Milwaukee in what was initially a sale. Rick Auerbach got assigned to Albuquerque – now a Triple A franchise -  on a loan and when that became permanent the cash was forgiven and it became an even-up trade.

In ’74 spring training the Brewers unveiled their own young hot shot shortstop in the form of Robin Yount, who was only 18 when camp broke. Given the starting shortstop gig over Johnson, his initial hitting was pretty anemic so Tim would get some early season starts while Yount’s hitting came around. That year Tim would also get time at second but it was basically an introductory season to the rest of his playing career as an infield back-up. Too bad, too, because his offense jumped a bunch: his average rose over 30 points and he put up nearly as many RBI’s in a bit over half as many at bats. He also had seven triples in what amounted to less than half a season. By the end of the year Yount was established as a Brewer institution and between Robin’s omnipresence and an elbow injury that had him on the DL for over two months, Tim’s ’75 was a mess of just 85 at bats during which he hit only .141. Most of his starts that year were at third base. In ’76 second base in Milwaukee was pretty messy and Tim was one of four guys to get significant starting time there and had a pretty good year offensively, hitting .275 in 273 at bats, his second-most up top. But he had zero power and Milwaukee finished last in the division for the second straight year. In ’77 when the team picked up Sal Bando via free agency Don Money was successfully transitioned to second. In July he had a chance at some playing time after Money sprained his back but the next game Tim hurt his hip, went on the DL himself, and finished the year with only 33 at bats. A couple games into the ’78 season he was traded to Toronto for Tim Nordbrook, another infielder. He would spend the next two seasons filling in second and short for the Blue Jays before retiring. He finished with a .223 average in 1,269 at bats.

Johnson had made lots of friends while playing and immediately after he stopped he returned to the LA organization as a scout and spring training instructor. He eventually began coaching in the system and in ’87 began managing Rookie ball. His next year at that level he won the championship as he did in ’89 when he moved to A ball. In ’90 he moved to the Montreal system and after a year managing Triple A became an advance scout the next two years. From ’93 to ’94 he was a Montreal coach and from ’95 to ’96 he was a coach for Boston. He then managed Triple A in the Cubs chain for a season before being named the Toronto manager for ’98. Tim led the Blue Jays to a record of 88-74, their best season since the team won the Series. Early the next year it was revealed that he’d told a story or two about his experience in Viet Nam, though his service was always stateside. The media came down hard on him for that – times have changed; now if one does that he gets his own reality show – and he was forced to resign. He could not get a gig here so he went down to Mexico where he’d managed winter ball. He won the league championship his first year and then in early 2000 left to scout for the Brewers but barely made it past opening day when he resigned due to media pressure fallout. He returned to Mexico where he managed the next three seasons. In 2003 he was able to return to the States as manager of the Lincoln Saltdogs, an independent team. He then moved to the Tucson Toros from ’09-’10 and the Lake County Fielders in ’11, a team that disbanded because its owners – including actor Kevin Costner – wouldn’t pay expenses or salaries. Since 2012 he has been the manager of the El Paso Diablos, another independent team. His record through last year in the minors is 1,143-943. There is a ten-minute video on his travails on YouTube. 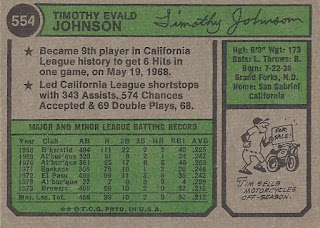 There’s Tim’s big offensive day in his star bullet. Away from that game he hit .215 that year. He led the AL in putouts in ’73, his only season as a regular.

This is another pretty easy one: