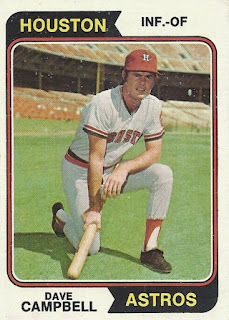 Dave Campbell’s final card has him doing the on deck thing at Candlestick. Topps covers nearly all the bases with Dave’s positions here, giving the “infield” abbreviation a period but not the “outfield” one one. By this point in his career Dave’s hamstring issues had pretty much immobilized him but he was able to gut himself back into the San Diego starting line-up at second in late April and by mid-May was hitting .333. But then things went south pretty quickly and he left the Padres on an 0 for 15 run that became an 0 for 36 run when he then went to Houston, and reached 0 for 43 before he had his first hit in his eighth game for the Astros. But while still with San Diego Dave had already begun sowing the seeds for his next career, which not too unlike his playing one started a bit rockily. But in that one he’d engineer a much longer run.

Dave Campbell was born in Michigan where he grew up playing ball and continued to do so when he went to the University of Michigan. His sophomore year of ’62 he helped take the Wolverines to the CWS title, pretty impressive given the school only played about a third of the games of most their tournament competition. Despite being offered contracts by the Braves and the Red Sox he remained in school through his ’64 graduation, earning a degree in education. Then, signed finally by his home-state Tigers, he killed his few games in A ball, hitting .369 with 13 RBI’s in his 65 at bats. He cooled off a ton to hit .209 the rest of the way in Double A. At both levels he played mostly shortstop and first as he had in college. In ’65 he improved to .310 in Double A the first third of the season and then hit .247 the rest of the way in Triple A, that year adding some outfield starts to his portfolio. A weak start in Triple A in ’66 had him back to Double A a third of the way through the season where he hit .228 in the first year in which most of his starts were at second. In ’67 he stuck at the higher level where he hit .246 but with 20 homers from the top of the order. He made his Detroit debut late that year. In ’68 back at Triple A he upped his offensive numbers to .265 with 26 homers and 64 RBI’s (vs. 36 the prior year) in 130 less at bats, partly due to a case of mono. Up top he recorded his first hit in an August game which was a home run. In ’69 he made the Detroit roster out of camp but got very little action, putting up a pretty miserable average in his few at bats. He did hit during his couple send downs to Triple A putting up a .427 average in a bit over 100 at bats. After the season he was sent to San Diego with Pat Dobson for Joe Niekro.

Campbell was named the Padres’ second baseman shortly after the trade was announced. He would have a good season defensively, leading NL second basemen in putouts and assists. He began the season hitting well enough, but a big mid-year slump pulled down his average, though his 28 doubles, twelve homers, and 18 stolen bases – which led the team – were hopeful. In ’71 Dave got some competition in training camp from new guys Don Mason and Garry Jestadt and so when regular third baseman Ed Spiezio got hurt in training camp, Dave got the opening day start at that position. He would grab a bunch more starts there but when Spiezio returned Mason had pretty much established himself at second and Dave would end up splitting starts with him for most of the balance of the season. He had another mid-year slump which pulled down his average and his power didn’t match his ’70 numbers, which was too bad since Mason wasn’t exactly a stellar guy on offense (though he did strike out a lot less). In early September Dave’s season ended with his first heel operation. In ’72 the initial plan was to have Jestadt start at third – he’d hit .291 for San Diego in ’71 – and new guy Derrell Thomas at second, making Dave an infield reserve. But Dave had a better spring training than Garry and fielded a touch better at third and started 30 of the first 33 games of the ‘72 season at that position. He was hitting as high as .280 in mid-May but his Achilles continued to bother him as his power numbers continued to tank. By early June he required another operation and his season ended then. In ’73 he assumed a utility role with much missed time and the two trades – to the Cards for Dwain Anderson and then to Houston for Tommie Agee – landed him with the Astros. In ’74 he again got very little field time as an infield back-up for Houston and after that season he retired finishing with a .213 average. In the minors he hit .267.

Campbell had been able to do some color work for the Padres while he was laid up following his surgery in ’72. Most of his away time from baseball had been substitute teaching but the broadcasting bug got him and after he finished playing he returned to San Diego where he did various support work for local stations and got occasional sportscasting work. In ’77 he returned to the Padres organization to manage its Double A affiliate in Amarillo, going 56-74. In ’78 he was able to move into the San Diego broadcasting booth where he became very popular, initially being teamed with Jerry Coleman. Unexpectedly fired following the ’88 season – one article called it the worst trade in Padres history – he did some talk radio work and called baseball and football games for San Diego State. In ’90 he moved to ESPN where he did mostly radio through 2010. From ’93 to ’98 he was also an announcer for the Rockies. Since then he has done mostly voice work for baseball video games. 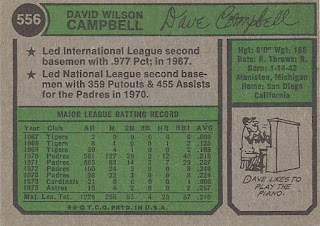 Dave gets an extra capital letter in that signature of his. This is the second card in a row in which he gets the pianist tag. His star bullets are expectedly all about defense.

Thse guys are both former Tigers, but the NL gets them together: