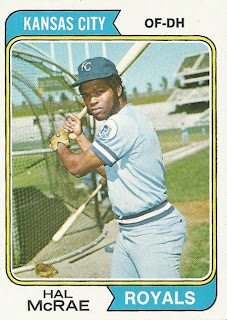 In another batting cage shot at Oakland Hal McRae shows off some of the meanest muttonchops in the set. Hal’s pretty serious here, an expression that would define his cards for a while after his big smile on his rookie one. Then for his ’76 card he got super happy which he more-or-less maintained the duration of his career. Hal is in the midst of his first of many seasons in Kansas City and while the Reds made some awfully good trades the first half of the Seventies, sending this guy to KC sure wasn’t one of them. That wasn’t apparent right off the bat though. Initially brought in to take over third base if Paul Schaal’s bat didn’t come around – another guy would take over that role - Hal had some problems in the new league and after spending most of the early part of the season platooning in right field, he was hitting only .151 with four doubles and eleven RBI’s by June 17th. He then began splitting time between right and DH and – shades of things to come – hit .283 with 14 doubles, 39 RBI’s and a .360 OBA in his final 212 at bats. The turnaround was enabled by work with hitting coach Charlie Lau who was also just starting to work his magic with KC. Between the two of them and some other guys – including that new third baseman – the Royals would go on to many years of success.

Hal McRae grew up in Avon Park, Florida, and in high school there played the big three sports as well as baseball for a semi-pro team on the weekends. The Giants apparently attempted to sign him when he graduated but Hal opted to go to Florida A&M, also apparently at the urging of his parents since the family was not well off and Hal received a scholarship. There he continued to play both infield and outfield and had some considerable power as well as excellent speed. After hitting .441 and .385 at A&M his first two years, he was drafted by Cincinnati in ’65, when Hal was 19 and had just finished his sophomore season (though there are some attestations that he was graduated by then). That summer he didn’t do too much in a few games in A ball in Tampa. The next year at that level he did considerably better with a .287/11/56 season in 394 at bats that saw him spend pretty much all his time at second base. He then put up similar numbers - .267/16/59 – in a ’67 split between Double A and Triple A, moving up to the higher level with his manager that year, Don Zimmer. Then a big ’68 in Triple A in which he hit .295 with 16 homers, eleven triples, 15 stolen bases, and 65 RBI’s got him up to Cincinnati for a July debut that lasted about a month. There he had a bit of a rough time at second but the real pain was felt after the season ended when during winter ball he got in a car crash that nearly wrecked his ankle. That injury and its aftermath went a long way in defining the rest of his career: Hal’s speed was pretty much gone as would be – for the most part – his time in the infield and he would have to become an extra-base hitter to stick; his ’69 season was wrecked as his rehab took forever; and Reds manager Dave Bristol tore him a new one by chewing him out over his rehab time, which would be a pivotal instance in turning Hal into an aggressive player and an in-your-face motivator. He had a real good run in the late Fall Instructional League that year and that would end his time in the minors.

In 1970 Cincinnati was awash with a bunch of good young players and two of them, both rookies, would share time in left field that season. Of the two Bernie Carbo, the lefty, would get about double the at bats that Hal McRae, the righty, got, and together they formed a pretty good combo, with 91 RBI’s between them. Hal didn’t do too hot in the playoffs, but he got three starts in the Series against Baltimore and hit .455 with three RBI’s. Then prior to the ’71 season regular center fielder Bobby Tolan got hurt and the plan was to move Pete Rose from right to center and have Hal take over Pete’s spot. But after doing some training camp work in center, Hal began the season there, but he had a tough time replicating Tolan’s numbers and a month into the season the Reds picked up George Foster to take over. Meantime Hal got moved back to the platoon gig with Carbo but with Bernie having a nasty bad sophomore season, Hal got a bunch more at bats than in ’70. His doubles total shot up and he added a few points to his average. In ’72 Tolan returned, Rose moved to left, and new acquisition Cesar Geronimo pretty much split time in right with Foster. That left Hal in a utility role and he got as many starts at third as anywhere. He put up nearly as many RBI’s in less than a third as many at bats in part due to his four pinch homers, one a grand slam. After the season he and former rookie pitching phenom Wayne Simpson were sent to KC for Richie Schienblum and Roger Nelson.

In ’74 Jim Wohlford pretty much took over Lou Piniella’s position in left (Lou had gone to NY) and new guy Vada Pinson took over right so McRae spent most of his time at DH. Good thing, too, because he upped his average to .310, his doubles to 36, and his RBI’s to 88. That season cemented his status as a regular somewhere and in ’75 between the acquisition of Harmon Killebrew and the breaking down of Pinson, Hal became the regular guy in left while Wohlford split time in right with the emerging Al Cowens. Hal continued with the excellent offense, posting a .306/5/71 season with 38 doubles while earning his first All-Star nod. In ’76 he repeated that honor by upping things to .332/8/73 with 34 doubles and an AL-leading .407 OBA in a season somewhat marred by a contentious batting title chase with teammate George Brett. He continued to do some work in left while mainly concentrating on DH that year which he would continue the next couple seasons. In ’77 the average came in but the power got amped up with a .298/21/92 season with an MLB-leading 54 doubles. Prior to the ’78 season Hal injured his right shoulder twice in another career-defining injury. No more playing in the field as his arm was shot. After a discounted .273/16/72 season in ’78, Hal got the shoulder operated on after the season and after a pretty good start to the '79 season was hitting a now-uncustomary .241 in early June. He pulled himself from the line-up, went on the DL, and did some rehab. It must have worked because after he returned in August he hit .335 with six homers, 16 doubles, and 44 RBI’s in the season’s remaining 194 at bats. After a continued bounce in the Series year of ’80 with a .297/14/83 season Hal had an off year in the strike season of ’81. He came back big in ’82 when he moved to the clean-up spot with a .308 average, 27 homers, and MLB-leading 46 doubles and 133 RBI’s. Those numbers got him back to the All-Star game and won him a Silver Slugger. In ’83 he put up more representational numbers with a .311/12/82 season in his last full year. Injuries would cut back his numbers the next three seasons though he hit .303 in ’84 and knocked in 70 runs – in just 320 at bats – in ’85. That year he finally won a Series title. In ’86 he started to do the big fade and in ’87 he got in a few games – hitting .313 – as a player/coach. He was released as a player that June and finished with a .290 average on 2,091 hits with 484 doubles, 191 homers, and 1,097 RBI’s. He hit over 30 doubles for ten straight seasons outside the strike one. In the post-season he hit .294 with a homer and 15 RBI’s in 48 games.

McRae didn’t wander too far after his playing career ended and from ’88 to ’89 he was a hitting coach in the Pirates chain. He then coached for Montreal in ’90 before returning to KC as its manager from ’91 to ’94, three of those years with a winning record. He then coached for Cincinnati (’95-’96) and Philadelphia (’97-2000) before coaching and then managing Tampa Bay for two pretty miserable seasons (2001-’02). He was then moved up as assistant GM of the franchise (’03-’04) before taking on the hitting coach role in St. Louis from ’05 to ’09. He then retired back to Bradenton, Florida. 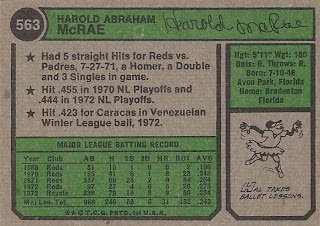 I am almost positive Hal has the first cartoon in this set referencing ballet. That’s some average from that third bullet. The Reds should have known there’d be lots more good stuff coming out of that bat. Hal’s son Brian was a first round pick by KC in ’85 and went on to have a pretty decent career himself (.261 with over 100 homers and nearly 200 stolen bases in ten seasons up top). The first two-thirds of Hal’s given name are nearly identical to one of the leads in “Chariots of Fire.”

One of these guys is actualy coming up pretty soon: