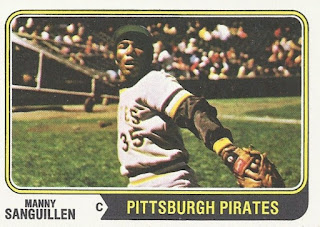 This is the second action shot in a row, which means that I should probably define what I mean by action shots, since this one, like Hank Aaron's regular card, does not really occur during a game (if it did, Manny here took off a lot more than just his mask when throwing someone out). So by action shots I mean an unposed photo of a player on a field of play. Usually the common denominator will be the kind of grainy picture seen here. I like this shot because it looks like it is from a far earlier era than it actually is; and it may BE old, like before '73, because this is a home shot and those stands look suspiciously like the Forbes Field ones.

Manny Sanguillen had a very interesting season in '73. He opened the year in right field, a sentimental choice to replace his friend/mentor Roberte Clemeente, who had sadly perished over the winter in a plane crash. While in earlier trials in the outfield in The States and in winter ball, Manny did quite well, he had a tough time in Pittsburgh. He would be replaced there by Gene Clines, who later went down with a knee injury, and then more permanently by new kids Richie Zisk and Dave Parker. In the meantime Manny moved back behind the plate. While Manny would top out in homers and tie his doubles best, all the moving crimped his average a bit. But he did pick off 40% of the guys who tried to run on him back in his defensive home.

Sanguillen played nearly his whole career for Pittsburgh. He was signed by the Pirates late in '64, on the recommendation of a bird dog scout in his native Panama. Always a good hitter, Manny hit an uncharacteristic .235 in '65 in A ball, and wanted to quit until none other than Danny Murtaugh talked him into staying. Good for Danny, because the next year at that level, Manny hit .328 before getting a little Triple A action. Then in '67 Manny was hitting .259 - but with more power - in Triple A when he was called up in late July after starting catcher Jerry May got hurt. Manny hit pretty well during his debut and then in '68 returned to Double A, where he had his best overall season in the minors, hitting .316 with 60 RBI's. After a good fall IL season, he was moved up to Pittsburgh permanently.

1969 was an excellent rookie season for Sanguillen as that average and his 44% pick-off ratio can attest. He probably would have made the Topps team if Atlanta's Bob Didier didn't step in to rescue that team. Manny immediately bumped Jerry May from the starting role and he would be an offensive dynamo while with the Pirates. His average popped in '70 and then in the Series year of '71 he topped out in RBI's while earning his first All-Star berth and then tore up the Series, hitting .379. In '72 he sampled his first outfield time while returning to the All-Star game. '74 was a step up from '73 as he hit .287 while scoring a career-high 77 runs. Then in '75 Manny hit .328 to get his third All-Star nod and posted by far his best OBA of .391. In '76 he missed some time to injury and following that year was involved in a wiggy trade, whereby he went to the A's for Oakland's manager, Chuck Tanner. The A's had lost essentially their whole team through free agency following the '76 season and I think the Tanner move was a merciful one on the part of Charley O. Manny left his first run in Pittsburg with a .303 career average.

Sanguillen got to Oakland after the big diaspora and actually had a decent year on a horrible club, posting a .275 average. He also put in nearly as much time at DH as behind the plate. He then returned to Pisstbugh from his one-season exile in a trade for Elias Sosa, Miguel Dilone, and Mike Edwards. Ed Ott had by then take over the starting catcher role and Manny was a back-up in his first year back, hitting .264 in 220 at bats. His plate time continued to decrease over the next two seasons when he mostly filled in at first base and pinch hit, though he did get one more ring from the '79 champs. His final average was .296 and he had 1,500 hits with 65 homers and 585 RBI's. He hit .282 in 29 post-season games and with that strong arm of his threw out 39% of attempted base runners against a league average of 35%.

After playing, Manny got involved with baseball in Latin America, particularly in his native Panama. He did some scouting for the Pirates and played in the Senior League. In 2002 he became a catching instructor for spring training and that year also opened his own barbecue restaurant at PNC Park. 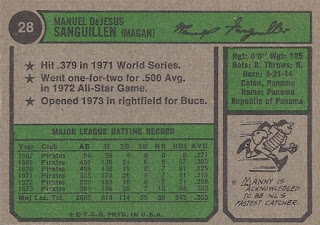 The back of the card gives us another parenthetical name. It is nice for Topps to give that average in the second bullet for those of us who are mathematically challenged. The cartoon makes notice of his speed; he also did not strike out too often. He was a very good contact hitter and ran the bases well. Finally, I love his home address. Not quite "New York, New York," but you gotta love the urgency at making sure we knew where he lived.

So how do we get from Sanguillen to Scott? Here's how: