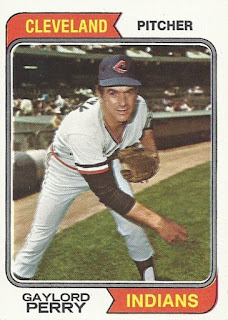 I have a new level of respect for Gaylord Perry. Whenever they have those annual Hall of Fame photos, Perry looks like the happiest guy there. You know who else looks happy in those pictures? Steve Carlton and Carlton Fisk (hey, I never realized those two guys have the same name!). Go figure...

And Perry had reasons to smile in '73. Yeah, his numbers were down considerably from his Cy season of '72 but he was still his team's best pitcher and the controversy he took such pleasure in creating was in abundance that year. Manager Ralph Houk of the Yankees got so frustrated with Gaylord's  - apparent - greaseball that he stalked to the mound and knocked off Gaylord's cap. Billy Martin accused him of throwing his greaser twice and got so blustered the second time that he had his own guys in the Detroit pen throw them (in not too coincidentally one of Billy's last games managing that team). Bobby Murcer railed at the commissioner, calling him a coward for not being able to figure out where and when Gaylord secreted his "stuff." All fun for Gaylord, who seemed to relish the attention and then blithely deny he did anything wrong.

Gaylord Perry and his brother Jim grew up sons of tenant farmers in North Carolina. In high school Jim pitched while Gaylord played third and they won a state title. After Jim graduated, Gaylord took his mound slot and over the rest of his HS career went 33-5 and was also a big deal hoops star. Signed by the Giants in '58, he threw excellent ball at the C level that summer and the next year got pushed all the way up to Double A where a few too many homers made his numbers a little sloppy. But he threw much better at that level the next year and though he continued to post losing records, took over a run off his ERA. In '61 he moved up to Triple A Tacoma and for the next year-plus showed excellent control while posting a combined 26-18 record and 2.52 ERA. Those numbers got him two trips to San Fran that year, one to kick off the season - when things didn't go terribly well - and a return in September, when they went a little better. He worked as a spot guy and even saw some playoff action against the Dodgers. Then, after a '63 start in Triple A early Gaylord was up for good.

'63 was a bit tough for Perry. He moved to a setup role in the pen and while he added a couple saves, his record wasn't so hot and his ERA was a bit high. Then in '64 the Giants picked up a pitcher named Bob Shaw who, legend has it, taught Gaylord a spitter. Gaylord has always toyed with people over how much he actually used that pitch but regardless of the reason his stats improved markedly that year as he returned to a spot role. Then in '65 though his record and ERA tipped the wrong way again, by the end of the season Gaylord was in the rotation full time which set him up for his first 20-win and All-Star season in '66. He would be a workhorse in that role and from '66 through '76 he averaged over 300 innings a season. But over the next couple years he was a bit of a hard luck guy since he was only a game under .500 while posting one of the NL's best ERA's over that time. Things got a bit better in '69 when he won 19. That year was also memorable because he was such a horrible hitter that his manager said that man would land on the moon before he ever homered; his first MLB home run came the day after the Apollo moon landing. Then things improved more so in '70 when a 15-1 start propelled him to another All-Star nod and his second 20-win season as he led the NL in starts, innings, and with five shutouts.  Ironically his two biggest victory seasons once in the Giants rotation were accompanied by his two highest ERA's. By then Gaylord was fully entrenched as a "known" cheater and after another very good season in '71 not too many NL hitters were upset when he was sent to the AL.

After the '71 season Perry was traded to Cleveland with shortstop Frank Duffy for fireballer Sam McDowell. That trade fell seriously in favor of the Tribe, especially in Gaylord's first AL season when he won his first Cy Young in '72, winning 24 games for a team that won only 72, while posting a tiny ERA. After all the fuss of '73 Gaylord won 21 in a '74 in which he was joined by his brother professionally for the only time while shaving nearly a run from his ERA. At the end of that season the Tribe picked up Frank Robinson, who would shortly thereafter be named manager and Frank and Gaylord did not get along. So after a middling start to the '75 season Gaylord was sent to Texas for pitchers Jim Bibby, Jackie Brown, and Rick Waits and for the Rangers had a much better second half. He then had two good seasons in Texas as the team's fortunes improved a bit, winning 15 each year. But after the '77 season the Rangers went on a youth kick and jettisoned 39-year old Gaylord to San Diego for some cash and pitcher Dave Tomlin. All he did for the Padres in '78 was win 21 games and his second Cy. He then followed a decent '79 for San Diego with a return to the AL where he pitched for Texas ('80), the Yankees ('80), Atlanta ('81 - I know; NOT the AL), Seattle ('82- '83), and Kansas City ('83) after which he retired at age 44. He got his 300th win for the Mariners and had five 20-win seasons and five All-Star appearances. His final record was 314-265 with a 3.11 ERA, 303 complete games, 53 shutouts, and ten saves. In his only official post-season he was 1-1 with a 6.14 ERA in two games. For a while he and his brother Jim had the record for most wins by brothers; that record was broken by the Niekro's.

Besides the spitballing legacy, Perry was also supposed to be a pretty tough guy to play behind. In the book "The Curse of Rocky Colavito" there is a chapter devoted to Perry's time with the Indians. In it teammates recall how he would stare at them from the mound after errors and call them out in the clubhouse before or after the game. It also sheds some light on how he did not get along with Frank Robinson, which prompted that trade to the Rangers. It is a great book for any Indians - or baseball - fan.

After playing Gaylord would be a gentleman farmer, which worked pretty well for him until it didn't, when his farm went bankrupt in '86, forcing him to take a gig as a sales rep for a local food company. Then, far worse, in '87 his first wife died in a car crash when she was only 46. For a few years in the late Eighties/early Nineties he created and then coached a baseball program at South Carolina's Limestone College. Since then he has been a big fixture at card shows and other baseball-related events. He was admitted to the Hall in '91. 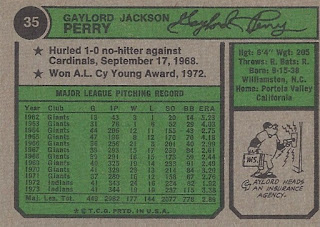 When this card came out, Perry was 35. It was hard to believe that he had 134 wins left in him but he did. Tons of innings and tons of decisions are the hallmarks of the card. I like the cartoon; Perry was 6' 4" and if he came to the door telling me I needed insurance, I would probably have agreed.

Perry moved around enough that the separation exercise should be pretty quick:

Dave May gets some good mileage in these.
Posted by wobs at 3:21 PM