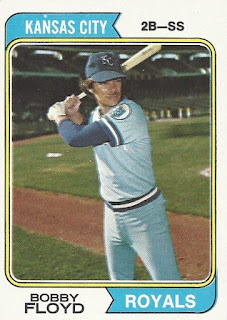 Bobby Floyd was a career backup infielder, first for Baltimore and then Kansas City. His '73 season in a few ways represented the zenith of his career. While his plate time was cut in half - mostly due to the arrival of Frank White - Bobby put up his best MLB average in a season split pretty evenly between shortstop and second. It was also only the second season - '69 was the first - in which his baseball time would be spent exclusively upstairs. Unfortunately it would also be his last MLB season of more than token at bats. This is his final card: a shot from Oakland in which a bunch of A's in the background appear to be mid-fire drill.

Bobby Floyd grew up a big three sports guy in California before going to UCLA for a couple years out of where he was signed by the Orioles in '64. A shortstop in school, that would also initially be his main position professionally and that summer after a misfired start in Double A he hit .269 with nine triples in A ball. At that level in '65 he put up his best pro line - .275 with seven homers and 70 RBI's - and then in '66 returned to Double A where he put up a .248/2/50 line as his league's best defensive shortstop. Bobby pretty much retained those stats when he went to triple A in '67 and was again on top of his league in all fielding stats. In '68 he upped his numbers at that level - a line of .287/6/52 in 359 at bats - before making his late debut for Baltimore. In both '67 and '68 he missed time for military work. He then spent all of '69 with the O's where he filled in at second, third, and short but was shut out of any post-season action.

Floyd began the '70 season back in Triple A where he was having a nice run and hitting .290 before he was recalled to Baltimore to take the roster spot of Paul Blair, who'd been beaned. But it was a short return and in June he was sent to Kansas City for Moe Drabowski. For the Royals Bobby would stay up the rest of the way, switch between short and third, and though he didn't see much plate action, maxed out that time with a fat average. He would then split '71 and '72 between Triple A - where he hit .266 and .300 - and KC, where he didn't. He had his busiest MLB season in '72, probably helped by the aging out of Bobby Knoop. He appeared in a few games for the Royals in '74, which ended his  MLB career, before more Triple A time in '74 and '75 finished his playing days. Bobby finished with a .219 average up top and hit .267 in the minors. 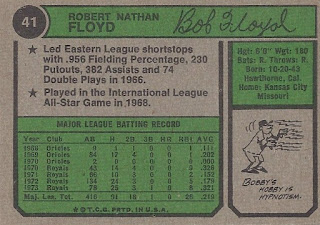 Bobby obviously did not stick around because of his bat, so he gets some props on his card back for his defense. Or maybe he just hypnotized his managers into keeping him on the roster.

This is the third AL guy in a row and he played for the O's, so:

But I bet Bobby Floyd didn't do any underwear ads.
Posted by wobs at 1:45 PM