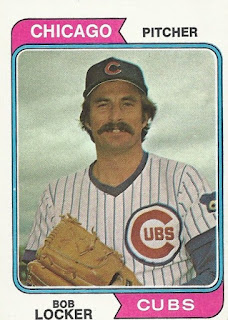 Here is Bob Locker in full 'stache which was pretty much mandatory if you were an Oakland guy in the '70's, which Bob was. Here he is in one of the few Cubs pinstripes of this set. He looks pretty happy even though it looks like a tornado is welling up behind him. But that's cool, because whatever the weather Bob had such a good '73 - with ten relief wins, 18 saves, and his normally excellent ERA - that he should have been beaming. Plus he knew he was headed back west to rejoin two-time champs in Oakland.

Bob Locker was signed by the White Sox in 1960 out of Iowa State where he played hoops and baseball. In the latter sport, Bob's best numbers came his senior year when he went 5-3 - the team as a whole went 12-6 in what was a typically short Big Eight baseball season back then - with a 3.50 ERA and 41 K's to earn all Big Eight status. He also earned his degree in Geology on time. After a very short summer season split between C and B ball that year, he was cranking things up with 15 wins and a 2.57 ERA in '61 when he was drafted into the military for the next two years. He came back in '64 right where he left off, winning 16 with a 2.59 ERA for Indianapolis, then the Sox' Triple A club. When he came up in '65 he was already 27, but he fit seamlessly into the Sox bullpen, and established himself as a premier reliever right off the bat by putting in some nice numbers as a setup guy. In '66 he segued into the closer role with a much better ERA and twelve saves. He then posted his best season in '67: a league-leading 77 games, seven wins, 27 saves, a 2.09 ERA, and almost 125 innings, all in relief. In fact, Locker never once started a game in the majors. After a discounted '68 - ten saves on a team that was in freefall - Bob had a poor start in '69 and was traded to the Seattle Pilots, the initial name of the Brewers. He was traded for Gary Bell, a big name for any old Red Sox fans out there. He is the first former Pilot in this set. 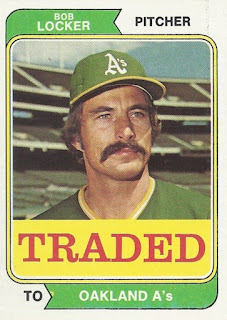 Locker had a nice second half  for another horrible team, adding six saves to his excellent posted stats. The next year he moved with the Pilots to Milwaukee. Halfway through that season during which his usage contracted a bit, he was sold to Oakland, where his numbers again improved for his new team. There he worked a bunch as Rollie Fingers' set-up guy, maintaining an ERA well below 3.00 while over his two-plus year run he added 20 saves of his own. His performance in the '72 post-season was not great and he was soon traded to the Cubs for Bill North, a pretty good pick up for the A's. From what I have read, there was an understanding between Bob and Oakland owner Charlie O that he would be re-acquired by the A's after one season. Pretty odd, but it did happen, as evidenced by the included card. Before the '74 season, however, Bob got hurt and spent zero time on the field during the season. He was then sent back to the Cubs as part of the trade that brought Billy Williams over to DH. After a poor start, the Cubs released him and that was it. For his career, he was 57-39 with a 2.75 ERA and 95 saves. In the post season Bob posted a 9.00 ERA in his four games.

Following his baseball days, Locker put in time in the real estate industry. He has a pretty high profile on the web right now: he is the author of a website, www.thanksmarvin.com, dedicated to getting Marvin Miller into the Hall of Fame. The site has a lot of touching personal tributes to Mr. Miller and is a very dedicated and selfless endeavor by Mr. Locker. It seems like he is an awfully good guy.

So, is this the best airbrush job on the Traded card, or what? The reason it looks so good is that it is not an airbrush, merely an old photo of Locker in his Oakland uniform. I also think this is the second of what will be three shots in a row from the Coliseum (thanks for the affirmation, Jim!). 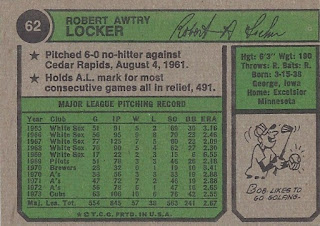 The no-hitter was a B level game; Bob was with Lincoln then. That consecutive game mark was broken by a guy coming up in a few cards. I guess he was a happy golfer also. 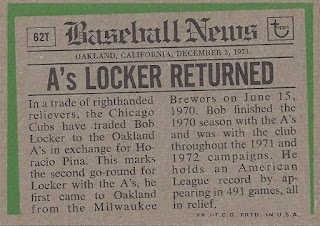 Look at that date on the back of the Traded card. This is almost an anniversary posting. Topps really seems set on getting that record in our heads. The headline makes it sound like Oakland is getting some equipment back.

This is an easy one:

Ron Santo's obituary was in the paper today. RIP Mr. Santo.
Posted by wobs at 5:58 AM