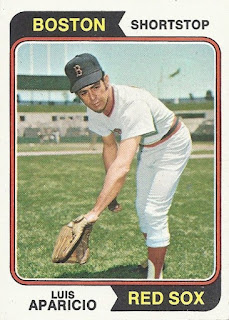 Look at this - two Hall of Famers in a row and they're both named Lou, more or less. Despite my propensity to mess this up - I really blew Ross Grimsley's geography - I am going to say this shot is from Oakland. If I am wrong, it will be doubly so because this almost exact setting is coming up again in two cards. This is also Aparicio's last card, so in homage I hope I am correct. Little Louie put in his final season as a player in '73 - and it was a pretty good one as his average topped his career one and he recorded double figures in stolen bases (against only one pick) for the first time since '69 - so the stats on this card are complete career ones.

Luis Aparicio grew up in Venezeula, the son of Luis Aparicio Ortega, probably the country's biggest baseball star. The senior Aparicio was also a shortstop who taught his son well, so that by the time the Baseball Amateur World Series was hosted in Caracas, the son was famous as well locally.After an excellent performance in that series as well as later that year in the country's first national tournament, Luis' reputation crossed borders and at the urging of both his manager, Lum Harris (whose biography will be up many cards later) and local and MLB star shortstop Chico Carrasquel, the White Sox signed him in early '54. Luis then moved pretty quickly through the Chicago system, hitting .282 in B ball that year and .273 - both very good averages back then for shortstops - in Double A in '55. Following that season The Sox sent its starting shortstop - ironically Chico Carrasquel - to Cleveland in order to make room for the team's new budding star.

Aparicio did not disappoint. His rookie season of '56 he won the AL Rookie of the Year title on the back of his .266 average and AL-leading 21 stolen bases. He also partnered right up with Nellie Fox at second base to provide excellent middle infield defense though that first year Luis had a bunch of throwing errors to the point where purportedly the home crowd was afraid to sit behind first base. But that got fixed quickly and Luis' D and speed would be the backbone of the improving Sox teams over the next few years. He led the AL in stolen bases with numbers in the upper twenties the next two years and in '58 won his first Gold Glove and received his first All-Star nod. Things peaked in '59 when Louie and Nellie together took the Go Go Sox to the '59 Series, finally breaking the NY stranglehold on the league and in which Luis performed very well. That year Luis upped the stolen base totals to 56 and he kept the number elevated the next couple years even though the Sox' fortunes faded pretty quickly. He would continue to lead the AL in that department and pick up All-Star and Gold Glove selections every year. He and Nellie played together through '62, which was an off one for Luis, partly, it was deemed, because he had put on weight. His stolen base total slid to 31 - though he still led the league - and his average 30 points. He was then traded to the Orioles for another Rookie of the Year guy, Ron Hansen, Pete Ward, and Hoyt Wilhelm.

Aparicio added his fine defensive touch to the Baltimore infield, reviving his offense a bit in '63 and much moreso in '64 when he hit .266 and stole 57 in the last year he would lead the AL in that department. In '65 the average took a hit but he reached his career high with ten triples and in '66 he helped the O's reach the World Series with one of his best offensive seasons, this time winning a ring. But '67 was another off year and following that season he was sent back to Chicago in a trade that brought Baltimore Don Buford.

While the Sox teams to which Aparicio returned were a pretty steep discount to the Go-Go guys, it was during this second round for the team that his average bloomed, popping to over .280 from under .260, including his sole .300 season, in 1970. Following that season he made his last move, going to the Red Sox for Mike Andrews and Luis Alvarado. This Luis continued garnering All-Star picks for Boston and was released during '74 spring training. He finished with 2,677 hits, 506 stolen bases, and a .262 average. He led the league in stolen bases nine consecutive seasons. He also appeared in ten All-Star games and won eight Gold Gloves. He led league shortstops in putouts four times, assists seven times, and fielding percentage six times. He is second all time in shortstop assists, fourth in double plays, and sixth in putouts. In the post-season he hit .286 in his ten games. He made it to the Hall on votes in '84, the first Venezeulan to do so.

After his career ended Aparicio returned to Venezuela to manage in its winter league, do some baseball commentary, and be revered as a local icon. Back in The States he has been a big baseball card show attendee. 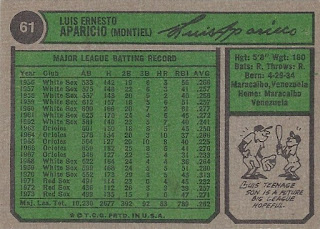 No bullets/ stars on this card - no room! We get the parentheses back and the cartoon is nice and familial. I know Luis' dad was a big baseball guy but can find no information on the son, so I must assume that he was not.The one knock on Luis that I have read from a couple sources is that he wasn't very helpful to new or rookie infielders with whom he played during his career. Despite that, I'm a bit surprised he doesn't get an honor card in this set.

Even though we have a lifetime AL'er following a lifetime NL'er, this one is short: