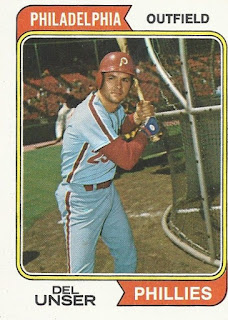 Here is Del Unser behind the batting cage at what appears to be Candlestick. This shot is taken during his first stint with the Phillies and boy, Del's first season in Philly was sure a big uptick to his '72 in Cleveland. Each of his stays in Philly were memorable for different reasons and I am pretty sure that Del, a thoughtful man, appreciated the ironic arc taken by his career.

Del's father Al - not the race car driver - was a big league backup catcher during the WWII years. He then coached and managed in the minors and the younger Unser was a batboy for some of those teams. After being a star in the big three sports in HS - in baseball he was a pitcher and first baseman - Del then went to Mississippi State and after being selected by the Twins and the Pirates, respectively, in earlier drafts passed on those teams. He wanted to get his degree and in '66 he did just that - in Mathematics - and that year hit .343 to be both a President's Scholar and TSN All-American outfielder. During his college summers he also played ball in the Basin League. Del was again drafted and finally signed for real in the first round of the '66 secondary draft by the Senators. The next two years were spent in Double A and were nothing special offensively since he averaged about .226 but he did establish himself as an excellent defensive outfielder and after a big Fall IL season in '67 followed by a good spring in '68, Del made the DC cut.

Unser came up in '68 with a reputation for speed and outfield grace. He moved right into the Senators' starting lineup as center fielder. '68 was a tough year to break in as a hitter and even though he hit only .230 with 30 RBI's in over 600 at bats, Unser came in second in Rookie of the Year voting. In '69 he nearly doubled his RBI total and raised his average nearly 60 points. On top of the effects of the expansion year and lowering of the mound, Del attributed the improvement to delayed effects from time spent with Harry Walker, then the Astros hitting coach (Houston and Washington shared a spring training site) and having another hitting guru, Ted Williams, as his manager. An injury early in the '70 season robbed him of significant field time and pulled Del's average down a bit. In '71 the playing time bounced but the average didn't and following that year he went to Cleveland in a trade for which another ROY runner-up, Roy Foster, was the primary piece on the other side. For the Indians Del had a horrible year and he came to the NL in a trade for Oscar Gamble after one year.

With Philadelphia Unser prospered, settling into an up and coming outfield and in '73 putting up numbers to rival '69's. In '74 he upped his RBI total to 61, his lifetime high, and continued his stellar work in center. By the end of that season, the Phillies were well-stocked in the outfield and sent Del to the Mets with others for Tug McGraw. In '75 Del flirted most of the season with the NL Batting title and finished with his lifetime high as a regular, .294. But in '76 after a strong start his average took a nosedive and mid-season he went to the Expos for Pepe Mangual. Those late-'70's Expos were developing a formidable outfield themselves (Andre Dawson, Ellis Valentine, and Warren Cromartie) and even though Del's numbers had a nice resurgence in '77 his playing time diminished. By '78 he had settled into his role as a defensive replacement and the one that would characterize his next few seasons, pinch hitter. Following '78 he signed with the Phillies as a free agent.

Unser's second coming in Philadelphia saw him become a fan favorite even though his field time was almost non-existent. In '79 his numbers were excellent in the pinch - a .322/4/14 line with a .385 OBA in 45 at bats - and he set a record with three straight pinch hit homers. In '80 his line was again impressive - .333/0/7/.413 in 39 pinch at bats - and he forever endeared himself to Phillies fans with amazing clutch performances in both the NL playoffs and the Series. He would hang out there until midway through the '82 season, when he was released. His career numbers were a .258 average, with 87 homers and 481 RBI's. In that one post-season, he hit .455 with 3 doubles and 3 RBI's in 11 at bats. Defensively Del ranks 80th all-time in center field putouts and is in the top 50 in assists and double plays.

After working with relatives away from baseball for a bit over a year, Unser returned to the Phillies fold in '84. Initially he was the team's director of minor league hitting before moving up as hitting coach after that season. He did that through '88 and then was returned to his minor league gig ('88-'89), was director of player development ('89-'98), and scout ('98-present). 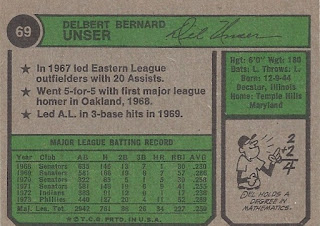 The star bullets appropriately indicate Del's defense and his speed. He has a nice flowing signature; I'll leave the lean thing alone. Not only did Del get a degree in mathematics but by the time he came up he had already completed his first year in a masters program.

Again we have a couple guys who missed being teammates by a few seasons: