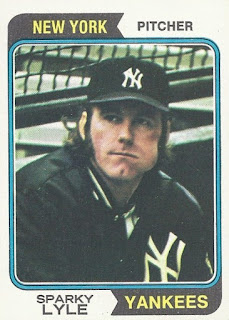 This is Sparky Lyle's last card without his walrus mustache. It is also one of the cards I am classifying as an action shot even though there is nothing happening. Not unless you include that wad of tobacco being chewed. The shot looks like it was taken by the dugout at Yankee Stadium. Spark's '73 was pretty active though it didn't start that way as an off-season ankle injury led to an abbreviated spring training and a save-less April. But in May he caught fire and by the end of June had 19 saves which helped him grab his first All-Star nod. He would finish with 27 saves for the season despite missing some significant time from early August on, again due to the ankle.

Sparky Lyle played American Legion ball in rural PA during high school - his HS didn't have a baseball team - and was signed by the Orioles in '64. After spending that summer as a starter in Rookie ball (not so good) and A ball (quite good), Sparky was left unprotected and taken in the first year draft by the Red Sox. While his first season for Boston didn't produce great numbers - 5-5 with a 4.24 ERA in A ball - it was a very important year for Sparky career-wise because of two things: he met Ted Williams who told Sparky he needed to pick up a slider; and he got moved to the pen. Armed with his new pitch Sparky accelerated his move upward as a nice 8-3 extended season in Double A and fall ball in '66 was followed by a '67 in Triple A during which he went 2-2 with a 1.71 ERA in 16 games that got him elevated to Boston that June.

Once Lyle got to the MLB level he was there to stay and he picked up that summer of '67 where he left off in the minors, throwing excellent ball and adding five saves. An injury in late September kept him from the Series though. Two excellent seasons followed during which Sparky accumulated a total of 28 saves. Then, after not giving up a run until early May a tough spring of '70 led to a poor record and elevated - for him - ERA, though he did record 20 saves. '71 saw the ERA returned to its norm, another 16 saves, and a trade. Prior to the '72 season the Sox, looking for a first baseman after the trade of George Scott to the Brewers, sent Sparky to the Yankees for Danny Cater and Mario Guerrero. The trade worked out damn well for NY.

While the trade hardly matched the Ruth sale from years earlier, it did land the Yankees an All-Star reliever for a backup infielder and a guy that would be out of baseball in three years. Lyle hit the ground running for NY in '72, posting his best numbers to date, including a sub-2.00 ERA, nine wins, and a then-AL record 35 saves (that record was broken the next season by a guy we have already seen, John Hiller). Sparky was viewed as the primary reason the Yanks almost won the division and he would ironically finish higher in MVP voting (third) than in Cy Young voting (7th). After his All-Star '73 he repeated the great/OK pattern in '74 -'75: the first year he went 9-3 with a 1.66 ERA and 15 saves; in '75 as things got a bit testy with manager Bill Virdon, his line was 5-7/3.12/six. In '76 Spark returned to the All-Star game, led the AL with 23 saves, and pitched shutout ball in the post-season. In '77 he stepped up those numbers in his final All-Star season, led the league in games, went 13-5 with a 2.17 ERA and 26 saves, and won the Cy, the first AL reliever to do so. He won two games against KC and one in the Series. The reward for that was being stuck behind free agent Goose Gossage the following season and while the numbers were decent - 9-3/3.47/nine saves - it was a very frustrating season for Lyle as detailed in his diary of that year, "The Bronx Zoo." After repeated requests to be traded he got his wish when after the season he was sent to Texas in a deal that brought the Yankees Dave Righetti.

Things didn't go super well for Lyle once he departed NY. His record woulds be pretty good and his first season in Texas produced a 5-8/3.13/13 saves line. But after his ERA moved up by over a run in '80 Sparky was sent to Philadelphia for the pennant dash and while he threw well he got there too late to make the post-season roster. In '81 he went 9-6 in 48 games but the ERA stayed up there and he only recorded two saves. After a poor start to the '82 season he was sold mid-year to the White Sox in his final year. Sparky finished with a 99-76 record, 238 saves, a 2.88 ERA and 899 games, all in relief. In the post-season he was even better: 3-0 with a 1.69 ERA and a save in his 13 games. And he wasn't a bad hitter, putting up a career batting average of .192.

After playing Lyle made some Miller Lite commercials and spent a few years working the casino circuit. He then returned to baseball in '97 when he became the manager of the Somerset Patriots, a Jersey minor league franchise. He just finished his 13th year there. 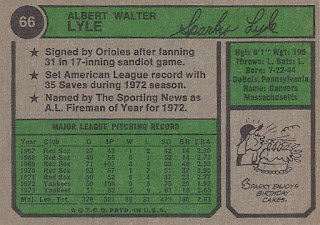 The first star bullet refers to a game in '64 in which Lyle pitched 15 innings. The cartoon is very tongue-in-cheek although the author of it may not have known that at the time. Sparky's primary association with birthday cakes was that he enjoyed sitting - naked - on the ones that came for his teammates. This is also courtesy of his book. I do not remember anything from it that specifically related to the '73 season, but there will be other pearls on future posts.

It does seem appropriate to link these two All-Stars with a third: