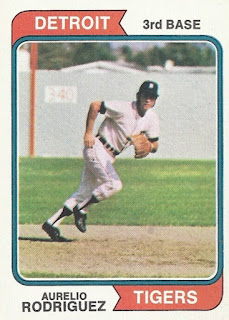 Here we have the original A-Rod performing some lateral footwork on a spring training field that apparently abutted somebody's backyard, judging by that roof in the background. Aurelio - actually called Rod when he played - had a gun for an arm and seems to be without his usual mitt which he painted black and called "The Black Hand" (sounds like something from Sherlock Holmes). In '83 Rod was named by Baseball Digest as the best Latin American third baseman ever and in 2002 in an informal poll, Duane Kuiper and Mark Krukow - then covering Giants games - both named him the owner of the best infield arm they ever saw. So did Elrod Hendricks in a separate interview. Also, he was already a legend baseball card-wise because his '69 card was really a picture of the California batboy. Aurelio's '73 was a pretty typical year for him: low average, high strikeouts, spotty power, and very good fielding as around him everyone else in the Detroit infield got old pretty fast.

Aurelio Rodriguez was purchase by the Angels from Jalisco in the Mexican League in '66 after hitting .292 with 18 triples for that team. In '67 he generated some nice offensive numbers at both Double and Triple A levels - over .300 at both stops - and was called up to California. He gave an early indication of his defensive skills by producing only one error in 29 games. In '68 he started the season back in Triple A - .249 while playing short - but then came up and got increased playing time after incumbent third baseman Paul Schaal got beaned. When Schaal then got taken by KC in the expansion draft, Rod got the starting gig. He showed an indication of his skill set by leading the AL in double plays and finishing second in assists from his position that year. Then in '70 he'd stepped up his average a bit when early in the season he went to Washington in a trade.

In a trade that initially worked out pretty well for both sides, Rodriguez and outfielder Rick Reichardt went to DC for third baseman Ken McMullen. Aurelio thrived offensively under manager Ted Williams and his 19 homers and 83 RBIs would be career highs by pretty large margins. But following that season he was sent to Detroit with Ed Brinkman and Joe Coleman for Elliott Maddox, Denny McLain, and others. That trade ended up being hugely one-sided as Detroit got the left side of its infield for the next four years and Rod was the primary Detroit third baseman for the rest of the decade. While he wouldn't approach those Nat offensive totals he would put in that excellent D. In '71 he topped out with 68 runs scored. In '72 he helped Detroit break the Baltimore strangle hold on the division while leading the AL in assists and putouts, but he had a horrible playoff (0 for 16). In '75 he had his best power year since '70 with 13 homers and 60 RBI's and in '76 he became the first AL Gold Glove-winning third baseman whose name was not Brooks Robinson since the '50s. In the late '70s he began to lose playing time, first to Phil Mankowski, then to Tom Brookens, though in '78 he topped out with a .265 average. Following the '79 season Rod was sold to San Diego.

Rodriguez got in about half a season of split time at third for the Padres in '80 when he was again sold mid-summer, this time to the Yankees. The sale worked for him because he got some considerable starting time in NY because Graig Nettles went down with hepatitis. In '81 Aurelio hit .346 in a very reduced role. In the post-season those two years he hit a combined .389 for the Yankees. He then went to Toronto - for whom he never played - the White Sox, Baltimore, and back to the Sox the next two seasons. In '83 he also saw his last post-season action for Chicago, ironically against Baltimore. For his career, Rod hit .237 in 17 seasons, with 124 homers and 648 RBIs. In the post-season he hit .206 in his 14 games. Defensively he is in the top ten all time at third base for double plays and assists and is currently 35th in putouts.

Rodriguez continued playing Mexican League ball after he finished in the States, both in the winter and the summer. In '83-'84 he was his winter league's mvp. In summer ball he hit well over .300 through '87 and then began coaching, along with some managing. He also managed in the States - he went 35-42 in 1990 in the Detroit system - and was still coaching when he was killed in Detroit in 2000 by a car that jumped the curb and ran him down on the sidewalk. He was 52. 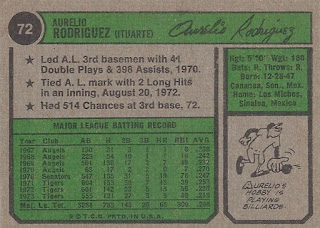 We have the first parenthetical name seen in a while. On Wikipedia, it lists his full name as Aurelio Rodriguez Ituarte Jr. so maybe it is an alternative last name, although I have yet to see it used in the signature. Lots of references to his defense. Long Hits gets capitalized; I still think that is a funny term. Aurelio was buried in his home town.

This one is all AL: