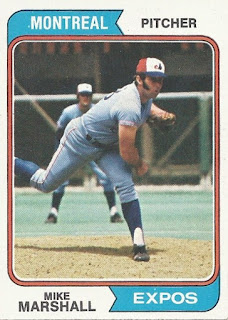 It has been a while since we have had a multi-card post and it is appropriate that it is this guy, the subject of the first or second biggest trade of the off-season. Mike Marshall looks enormous here pitching at Candlestick in a position that indicates he has yet perfected his delivery system (more on that later). If I am correct, then that is one of four guys behind Mike: Ron Hunt (too tall to be him I think) or Tim Foli (don't see the glasses) at second or Mike Jorgensen or Hal Breeden playing an awfully wide first base. My nod goes to Jorgensen. Regardless of who is behind him, Mike put up a very big year in '73, setting soon-to-be-broken records in games and relief innings by a pitcher; winning 14 in the pen with an NL-leading 31 saves; and finishing second in NL Cy Young voting. He damn near got his team to the playoffs which would have put a non-US team there 20 years before Toronto.

Like the man himself, Marshall had an interesting career. Signed by the Phillies in 1961 as a shortstop, Mike put up some nice offensive numbers in four minor league seasons: a .280 average with an OBA in the upper .300s. He had a very bad back that was injured in a horrible car accident when he was 11 and that plagued him throughout his career which made fielding problematic. One season he had 68 errors. He reached Double A in the infield and in '65 informed management that he was going to become a pitcher. He had just finished his undergrad degree at Michigan State and had started on his Masters when they demoted him to A ball in response to his position change. Mike actually put up some decent numbers as a reliever right off the bat and by the end of the '65 season was back in Double A. Prior to the '66 season he was sold to Detroit and for them he put up super numbers at that level - 11-7 with a 2.33 ERA again in the pen - and was promoted in '67. It was around then that he became interested in the physics of throwing a baseball and kinesiology and that year he initiated his ability to piss off his managers and other players by utilizing the fruits of his academic labors in his craft. Despite excellent numbers, he was sent down by Mayo Smith, who was upset that Mike taught himself a screwball, which would be his signature pitch. It was also around this time that as a graduate teaching assistant at Michigan State, Mike had a student who happened to be a wide receiver on the football team named Steve Garvey. After a season in Triple A as a starter - he went 15-9 with a 2.94 ERA - he was taken by the Pilots in the expansion draft. There he got some nice props from Jim Bouton in "Ball Four" and also argued constantly with manager Joe Schultz and pitching coach Sal Maglie, neither of whom came off particularly well in the book. Thogh Mike's numbers remained pretty good in Triple A  - the Seattle minor league system was a bit messy - Mike's '69 for the Pilots was pretty messy itself and he decided around then that due to his back and other issuers he was much more effective as a reliever. He was sold to the Astros before the '70 season and then went to the Expos mid-year for Don Bosch. For both teams his time was spent primarily at Triple A where his numbers - a combined 6-4 with a 1.85 ERA and seven saves in 25 games - showed it was time to be given a shot up top. It was in Montreal he found his niche. 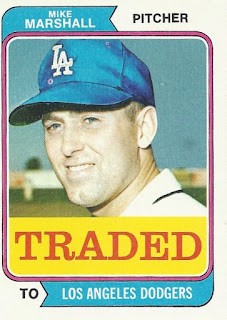 For the Expos, everything started clicking for Marshall in '71. While his ERA was nothing special, it was his first of four successive seasons that he led the league in games finished and the year he established his game: three money pitches (screwball, slider, and curve) and 100+ innings in relief with double digits in saves and decisions. He attributed his success to an understanding manager in Gene Mauch. In '72 and '73 he had his two huge seasons, garnering significant Cy Young and MVP votes. Those four seasons he put up 93 saves. When in '73 LA decided that a workhorse reliever was the needed step for a title, they sent Willie Davis to Montreal for Marshall. The trade was hugely rewarding for LA as the team won the NL pennant and Mike got his Cy, setting new records in games and relief innings pitched, with 106 and 208 respectively. In '75 Mike broke a rib throwing a curve which aggravated his back as well and he missed a significant part of the season. In '76 he was traded to the Braves - while he and Walter Alston got along great, he and Tommy Lasorda were not friendly - and for the next few seasons his stats were mediocre. During that time he injured his knee and finally had surgery that repaired his back.

In '78 Marshall was signed by the Twins as a free agent and reunited with Gene Mauch, then Minnesota's manager. For those next two seasons, he was up to his old tricks, and in '79 he had numbers that rivaled his best: 142 innings, 10 wins, a 2.65 ERA, 32 saves, 90 games, and 84 finished games. He led the league in those last three. He had a poor start in '80 and as player rep managed to piss off Calvin Griffith and was cut. A nice season followed with the Mets, but despite really good numbers, he was released. Mike finished with a 97-112 record, 3.14 ERA, three complete games, a shutout, 188 saves, and 1,386 innings pitched in 723 games, or nearly two innings per game. He was also a pretty good hitter and an excellent fielder. In his sole post-season, '74, he went 0-1 but with a 0.75 ERA in seven games, striking out 11 in 12 innings.

Marshall now runs a baseball institute in Florida where he teaches pitchers to throw using the fundamentals he developed from his studies. He has a pretty cool website, linked to here. It has videos and a bunch of literature.

OK, so we finally have a lame Traded card. It is not the phosphorescent paint on the hat that bothers me so much as it is the photo itself. First of all, it is the same one used for Mike's regular '73 card. On top of that, I am almost positive that it is a Tigers uniform he is wearing which would make the photo seven years old! That's lame. 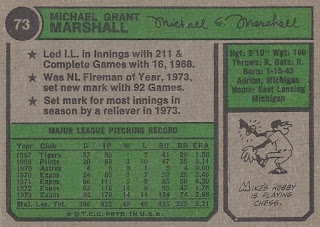 Look at those '73 numbers: hard to believe they were just a warm-up. Of course Marshall played chess; the guy was a genius. He has another name that would have been great for a lawyer. Mike was also the guy that talked Tommy John into getting his rotator cuff surgery. 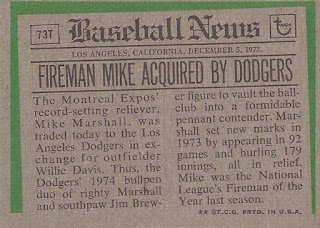 Not too much going on with the Traded card back. I find it hard to believe that his season did not qualify for at least a "5" card. Frankly, though, I have not found anyone occupying those cards not deserving of that status.

Again, these two guys narrowly missed playing with each other: