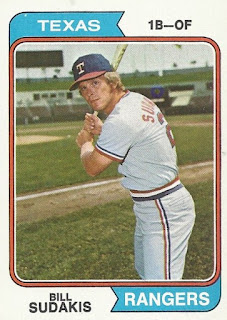 OK, so here we go. Check out this picture of Bill Sudakis and then look at the one of Luis Aparicio two posts ago - how's that for self-advertising? - and you'll see that they are almost the exact same spot. Who says this blog stuff isn't exciting? Speaking of exciting, Bill's '73 season was much more so than his injury-marred '72. Picked up from the Mets for one-time phenom Bill McNulty, this Bill caught a little bit and DH'd a couple games but by the end of June was toting an average well below Mendoza levels on less than 100 at bats. But by then various experiments at third base for the Rangers had failed - six guys in '73 got significant time at that position - and big Mike Epstein had been traded. So Bill got a bunch of work the rest of the way at the infield corners and made it count by posting a .276/12/38 line on just under 200 at bats. He only played two games in right field which makes his card designation a little odd - it should have been 1B-3B - but he would eventually up his season profile a bit when he got a mention or two (kind of) in a great book.

I have always wanted to categorize Bill Sudakis as an enigma because I have found him strangely interesting. But outside of a couple blurbs, I can't really find anything to justify that. Sudakis was signed by the Dodgers in '64 out of his Joliet, Illinois HS and that summer had a tough run in Rookie ball while playing third. The next year in A ball he added 30 points to his average and second base to his resume. That was followed by a '66 in which between A ball and his fall IL season Bill put up a .286/24/110 line that got the folks in power-starved LA very excited as he put in time at yet another position - shortstop - but didn't wow anyone with his defense. By then Bill was doing his military reserve bit so he'd miss some time but around that in '67 at Double A he hit .293 with 73 RBI's while completing the infield sweep by getting a bunch of time at first. After a very similar '68 at the same level, Bill got everyone excited again with a very nice September run in LA at the hot corner. So in spring training of '69 he was named the latest in a recent endless spate of LA third basemen. 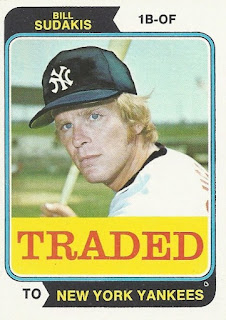 Sudakis' rookie year of '69 was a bit mixed: while his offensive stats - particularly his average - didn't live up to the promise of his '68 season, he still posted the best year of an LA third sacker in a long while and finished second on the team in homers and fourth in RBI's. But his defense was a little suspect. So in '70 an impatient LA management combined with Bill's seeming ability to play just about anywhere led to two things: the Dodgers moved on to a new starter at third, Billy Grabarkewitz (who would give way to Steve Garvey, who would give way to Bobby Valentine, who would give way to Ken McMullen, who would give way to ... that guy that stuck); and half of this Bill's games were at catcher. In that role he was a gamer, adding 30 points to his average and again finishing second in homers even though his at bats dropped by over a third. But Bill was a big guy whose only real playing time at the position was an abbreviated '69 fall IL season and on top of  an inability to throw out base stealers - he caught two out of 32 - he really messed up his knees in his new position. So '71 saw an extreme contraction of playing time, a big drop in the offense, and in early '72 a placement on the waiver wire. The Mets grabbed him but with knees still a hot mess, Bill got almost no playing time at any level, putting in a little rehab time in Triple A. After the trade to Texas, he was an AL guy.

After the second half revival of '73, Sudakis hit the road again in the trade shown here. With the Yankees, he played first and DH'd, posting numbers that were a slight discount to his Rangers ones. For a few reasons - see below - he was then traded to the Angels for Skip Lockwood. After a few games in '75 for California he was released mid-season and picked up by Cleveland, where again he got very little playing time before an August release. In '76 he signed with Kansas City where after an abbreviated but productive Triple A season for the Royals in '76, he was done. Bill finished with a .234 average, 59 homers, and 214 RBI's in 530 games.

This Traded card looks familiar, right? It is just a closeup of his regular card. This is another card I think is not too bad as the airbrushed Yankees logo looks pretty good. I know it seems I am being generous, but there will be some bad ones coming up.

So Bill Sudakis did have some colorful moments with the Yankees. In Sparky Lyle's book about the '78 season, "The Bronx Zoo", he tells stories about various teammates from the past. The Sudakis one is that when Bill Virdon (lots of Bills on this post) was managing the Yanks, he was fond of flexing his biceps while doing the locker room lecture thing. Sudakis, who had really big pipes himself, would stand behind Virdon and do double bi shots during the lectures. So at least the guy had a sense of humor. Then, there is the Dempsey fight. Rick Dempsey and Sudakis were both back-up catchers to Thurman Munson during the '74 season. After calling each other out status-wise on a flight back to The City, they got in a big brawl in the lobby of their hotel. There are lots of incarnations of this fight - Sudakis stabbed Dempsey with a fork, Dempsey KO'd Sudakis with three punches, flying chairs, Lou Piniella - but what seems uniform is that the fight ended when Munson got Dempsey in a headlock. Also Bobby Murcer hurt his hand breaking up the fight; that was significant because the Yanks were in the pennant hunt - it was late September - and they went into the last series without their best hitter. They would lose out to the O's by two games. 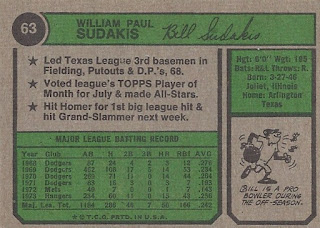 In '68 Bill had only five errors at third. Regarding that third star, he did have some killer games during his September show. I think the cartoon is pretty amusing. I am frankly no bowling scholar, but I find it hard to believe that one made lots of bucks being a part-time professional bowler, especially in the early Seventies. I could see this guy in the plaid pants and short-sleeved collared shirts though. 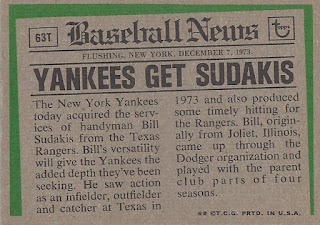 Lots of December trades; in fact this is the 37th anniversary of this one. Sudakis' nickname was Suds, which I just remembered. The trade was a purchase and from what I remember, Suds and Mike Hegan were going to spring training in '74 to fight it out over who got first base, since both Alou's had been traded in late '73. Frankly, neither won, and the Yankees got their guy later in the season from Cleveland in yet another good trade/ bad trade depending on how close you were to Lake Erie.

The other book in which Sudakis gets mention, indicated in the opening paragraph, is "Seasons in Hell", one of the best baseball books ever, which covers the Texas seasons from '73 to '75. The best bit about Bill in the book was a bit salacious, so much so that the author kept him anonymous in the narrative (Bill's enjoyment of sharing positions extended beyond the diamond; I'll leave it at that) but in the index that bit gets included under his label. Turns out that from the rest of the book, Bill fit in nicely with that team.

Let's use the competition to get these two guys linked: