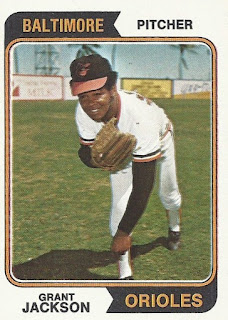 This is a happy Grant Jackson in his home uni. Given there are no palm trees in Baltimore, it must be a spring training shot. There is a sign for a milk ad and possibly a Yoo-Hoo ad in the background adding to the charm. I will always be a fan of this guy thanks to his famous butt play (hard to word that benignly), but that will come up later. In the meantime, Grant's '73 season invites commentary because it was quite good. Not only did he lead O's pitchers in ERA, but he also tied for team lead with nine saves - he and Bob Reynolds formed a pretty impressive lefty/righty closer combo - and set a record by putting up the most seasonal wins by a reliever without a loss. That record still stands.

Grant Jackson grew up in Fostoia, Ohio, where he was a big deal track, basketball, and baseball guy and once struck out 33 guys in a double header. But his grades weren't so hot so after HS he attended a local campus extension of Bowling Green, played some ball, and then watched his grades go south again. So he cadged a tryout with a local guy who happened to be a Phillies scout. The tryout went well and Grant was signed by the Phillies in late '61. He kicked things off in '62 with a messy year of C ball and then went 12-8 the following year in A ball, like most guys back then working around his military reserve hitch. '64 was another middling season split between A and Double A and in '65 Grant went 9-11 in Triple A, though his ERA improved a bunch. In '66 Grant finally put up another winning season at that level, going 10-8 with a 3.96 ERA. Exclusively a starter in the minors, he came up at the end of those two later seasons and put up some inconclusive numbers. But after a pretty good spring training in '67 he came up for good.

Jackson's timing for his arrival in Philly wasn't crazy great as the team's stars were either aging fast or just moody - see the approaching Dick Allen bio. His first year Grant was a spot guy and did OK, putting up an ERA that matched his better ones in the minors and adding a save. In '68 his innings came in - more reserve work - but so did his ERA, though his record sure didn't reflect that. Still, the ERA was pretty good and the next year Grant got elevated to the rotation and for a pretty lousy team put up a record that got him an All-Star nod. But that off-season Dick Allen left in a trade that initially didn't work out too well for Philly, the team continued its downward spiral, and this time Grant's pitching line joined the fun. But then his timing improved markedly as he and Jim Hutto were sent to Baltimore for infielder/outfielder Roger Freed.

With the Orioles Jackson moved to a swing role in '71 that qualified him as the closest thing that team had to a fifth starter; the four other guys each won 20 games. From then on it was all relief. The O's back then had rotations stocked with innings hogs so pen work could be light. But Grant made it work awfully well and in '72 recorded eight saves in his 22 games with a very good ERA, '73 improved across the board and the next two years were more of the same: a 6-4/2.57 line with twelve saves in '74; and a 4-3/3.35/7 line in '75. In '76 a not great start to the season led to low usage and probably Grant's inclusion in a big mid-year trade that June: he, Ken Holtzman, Doyle Alexander, and Elrod Hendricks went to the Yankees for Rudy May, Dave Pagan, Tippy Martinez, Scott McGregor, and Rick Dempsey. Again, Grant's timing was pretty good as in the second half he excelled for the pennant-winning Yanks, going 6-0 with a 1.69 ERA with a save and a shutout in a rare start.

Despite Jackson's great '76 work for NY he was getting up there - he'd turned 34 at the end of that season - and he was left unprotected for the expansion draft. So he was grabbed by the Mariners - his '77 card is for that team - and was then traded to the Pirates for infielder Craig Reynolds. His first season he did setup work for Goose Gossage and earned four saves of his own. After Gossage split, Grant became part of a bullpen rotation with Kent Tekulve and others and threw some nice ball. In '78 his line was 7-5/3.63/five saves and in the Series season of '79 he posted one of his best seasons, going 8-5 with a 2.96 ERA and 14 saves. After a nearly identical '80 season, Grant got itinerant and would move to Montreal, Kansas City, and back to Pittsburgh before finishing as a player early in '82. He ended his career with an 86-75 record with a 3.46 ERA, 16 complete games, five shutouts, and 79 saves. He had some decent moments as a hitter, throwing off a .333 average in '77 and a .230 the following year.

Jackson had interesting post-season experiences. He put up nice numbers: 3-0 with a 2.55 ERA and less than a runner an inning in his 13 games. He is one of a few guys to go to the Series with three different teams: the O's, the Yanks, and the Pirates. He won Game Seven in '79. It was during the '76 Series that he had the incident to which I referred in the opening paragraph. In Game Three Johnny Bench, I believe, hit a line drive up the middle. When Jackson, a left-hander, completed his motion, he was turned more-or-less towards third base. The ball hit Jackson right in the meat of his hip and he was able to retrieve it and throw Bench out. I remember the announcers cracking up at one of the only bright spots of the Yanks' performance that Series.

Jackson became a coach after his playing career ended, returning initially to the Pirates from '83 to '85. He then coached in the minors for Pittsburgh, the Cubs, the White Sox and the Yankees before returning up top with Cincinnati ('94-'95). He then coached in the Reds system through 2001 before moving to Baltimore's in '02. He retired for a few years before rejoining the Cincinnati system (2006-'07) and again retiring to his home outside Pittsburgh. 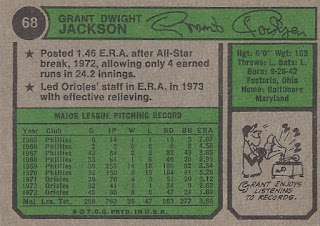 I am guessing Jackson was hurt during the first half of the '72 season, hence the first star bullet. I am glad Topps made mention of his '73 season. Nothing much else to say about the back although I do like the signature. Grant was a fast worker and was somewhat known for being able to jump into a game with minimal warmups, so there's a tidbit.

I bet these guys get connected through the NL: