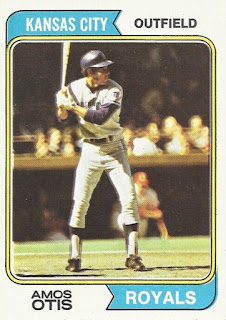 If you were a Yankee fan in the '70's, Amos Otis was one of those guys that you respected but kind of hated. He was a pretty complete player. His '73 season was a good indication of that: a big power boost got him to 26 homers and 93 RBI's while hitting .300 and a starting All-Star nod in center field. Plus he looked a little like Superfly. Here he is in one of the poor action shots that marred these sets for a while. He is in pretty good focus but everyone behind him looks like they are being viewed through a glass of water. That is probably Chuck Tanner looking out from the dugout which would place this shot at Comiskey. There is some irony regarding the placement of this card in the set, but I will get to that in a bit.

Amos Otis hailed from Mobile, Alabama which may have presaged his time with the Mets since that team's two outfield stars of the late Sixties/early Seventies - Cleon Jones and Tommie Agee - were from Mobile as well. And the Mets did scout Amos but he was drafted by the Red Sox in '65 out of HS as a shortstop. In Rookie ball that summer he got moved to third base since the Sox already had a big deal kid in Rico Petrocelli at shortstop. Amos put up a .329 average while fielding pretty well at his new position. In '66  he got moved to A ball where he played both corners and his offense cooled a bit. But he then hit .360 in fall IL ball only to be left unprotected and be taken by NY in the minor league draft. For the Mets he moved up to Triple A, added outfield to his infield corner positions, and put up a discounted '67 average of .268 but ramped up his base-running with 29 steals. When he came up at the tail end of that year his primary position was center field. '68 was all Triple A where the average moved up to .286, the field time was all first and center, and he rediscovered his power stroke with 15 homers. In '69 Amos made the NY cut titularly as the club's new third baseman - about number 135 in the series -  but then didn't get any starts there until mid-April when Ed Charles was out a couple games. The Mets gave him three starts at third during which he hit .300 and had one error. Then they moved him to center where his bat cooled off and he got left on the bench until June. So much for the new third baseman: the Mets sent Amos back to Triple A in June where he had an excellent half season and then pulled him back up in September for some limited outfield time. Then they did a very bad thing: they sent Amos to the Royals for a "true" third baseman in Joe Foy, ironically the guy ahead of Amos at that position back in the Boston system. Foy who'd put up somew decent numbers in Boston, had some weight issues and was rumored to have drug ones as well. The NY flyer on him didn't work out too well as Joe only lasted there for a season before finishing things up in DC in '71. To make things even worse for NY, Foy's failure at third prompted the other big bad trade NY undertook, but that's for another time.

Otis would be The Man in KC for pretty much the next decade, moving right into a starting outfield shot. His first year as a regular he led the AL in doubles while stealing 33 bases and posting a nice average while earning his first All-Star selection. In '71 the steals got bumped up to an AL-leading 52, the ribbies popped, and he recorded his first .300-plus average.as well as his first Gold Glove. After another good '72 Amos saw some cleanup time in '73 which helped move up the power stats. A discounted '74 was prelude to an injury-marred '75 that saw his average decline to its KC low of .247 but his stolen bases spike back up to 39. Then came the playoff years of '76 to '78 when Amos averaged .276 with 19 homes, 87 RBI's, and 27 stolen bases. In '76 he again led the AL in doubles with 40. In '77 he missed some time for injury and in '78 he topped out in RBI's with 96. In '79 both NY and KC missed the annual playoff battle but not because of Amos who posted his only 100 run season and a .295/18/90 line while stealing 30. In '80 injuries allowed Willie Wilson to begin getting some center time and Amos' time in the field declined that season and the next few, though he did post 88 RBI's and a .286 average in '82 in under 500 at bats. He stuck with KC through the '83 season, went to the Pirates as a free agent in '84 as a backup, and was released during the season. He retired with a .277 average, over 2,000 hits, over 1,000 RBI's and 374 stolen bases. In the post-season he hit .295 with three homers, eleven RBI's, and eight steals in his 22 games. He was an All-Star five times. And as a three-time Gold Glover, he also excelled defensively, more or less.

That was the knock on Otis when he played. A bunch of people felt he was not the most aggressive hustler out there. He was sort of infamous for not running out popups, not crashing into outfield walls, stuff like that. Sparky Lyle - coming up next, hence the irony - was not a fan and in "The Bronx Zoo" slams Otis for being less than enthusiastic in the field. Who knows? His stats look awfully good to me: tenth all-time in center field putouts; 20th in assists; and 12th in double plays.

It has been tough to get a line on what Otis did after playing. He DID play in the Senior League's two seasons in '89 and '90. He also coached for San Diego ('88-'89) after a year as a roving hitting coach in that system and Colorado ('93) sandwiched between doing the same thing in the Rockies system ('92 and '94). In '92 he admitted his bat was corked for the bulk of his AL career. At some point since then he retired to Las Vegas out of where he golfs and does card shows. 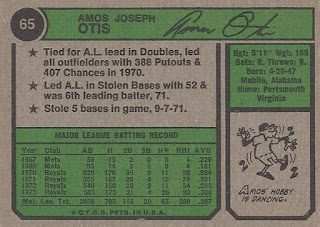 We are looking at a man who discovered his niche. While the star bullets focus on '70 and '71, the next two seasons were not shabby either. I could see Amos dancing, but not in a finger-snapping, knee-bumping kind of way.

I should address my minor infatuation with the signature leans since it came up on my last post. When I grew up, I was at the tail end of the "being a lefthander is bad" social more system, which was apparently not decided by a baseball man. Being left-handed was considered egregiously wrong and I remember the nuns at the Catholic school to which I went - not for long - trying to convert all the poor lefties to righthanded writers. When cursive was taught, the natural lean for righties was to the right; for lefties - or at least the ones I knew - it was to the left. When the teachers failed to convert the lefties, which was most of the time, they insisted they pick up the rightie lean for their writings. Some did, some didn't. For signatures, most people defaulted to their natural lean. So in addition to supplying a point for commentary on the card backs, the whole signature lean thing is, at least for me, a point of culural reference.

But, back to Mr. Otis, he and Doug Rau barely missed each other a couple post-seasons so let's see how we hook them up now: