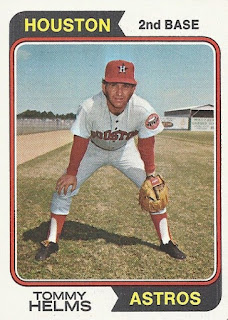 Here we have yet another Astro card shot in a location that barely resembles a ballfield. While I suppose that could be the outfield fence over Tommy Helms' left shoulder, it seems awfully far away. Frankly it looks much more like a farm what with the fencing and the low buildings. These guys rival the Expos in odd training parks.What wasn't odd was Tommy's '73 season. Tommy topped out in RBI's that year and his average was the best he put up in his three years as a Houston regular. That offense, coupled with his usual sterling work at second base, helped keep Houston in the playoff hunt for a while until his old team and LA steamrolled the division.

Tommy Helms was from Charlotte, NC, where he was chased by at least half a dozen MLB teams before being signed by the Reds in '59 out of HS. Then a shortstop, he started his career that summer in D ball and was a bit challenged. But he rebounded nicely at that level in '60, pulling his batting average up 40 points and his fielding one up over 20. He then moved up the ladder, putting up ten triples in B ball in '61 and then a fat .340 average in A ball the next year. That season enabled him to jump all the way to Triple A in '63 where his average dropped considerably while he got his first work at second base. But '64 saw another nice bounce at the same level to .309 with 69 RBI's as he again played short exclusively. It also got Tommy his first short look in Cincinnati. Most of '65 was spent in Triple A again, where the average moved up to .319 before an extended late season look in which Tommy brought both his position and high average up with him. After that trial he was up for good.

Helms' shortstop spot was still manned by All-Star Leo Cardenas in '66 and his other favored position of second base was taken by another All-Star guy, Pete Rose. But Cincy management wanted Tommy's glove on the field so in the wake of a disastrous trade - see ya Frank Robinson - incumbent third baseman Deron Johnson got moved to the outfield and Tommy got third base, a position he'd never played at any level. But Tommy was an adaptive athlete and he responded by by putting up good enough offensive (.284, 23 doubles, 72 runs) and defensive (only 13 errors) numbers to win the NL Rookie of the Year. In '67 the Reds moved Rose to the outfield, Tony Perez to third, and Tommy to second, the position he would inhabit during the bulk of his career. His numbers stayed pretty consistent the next two years and he would see All-Star appearances in each one. His average dropped a tad the following two seasons although he maintained his defensive excellence, acknowledged by the Gold Gloves he won each year. But following the '71 season he was part of the big trade that brought the Reds Jack Billingham, Joe Morgan, Denis Menke, and Cesar Geronimo for Lee May, Jimmy Stewart, and him.

While it would be tough to be on the wrong side of a trade that built a pennant-winning Machine, Helms helped it pay immediate dividends for the Astros as the team recorded its best record in '72. Tommy teamed with Roger Metzger to solidify the middle infield into one of the best in the league and would remain Houston's starting second baseman through '74, a year in which his offense was comparable to his '73 numbers. After that season, Houston traded Lee May to the Orioles for Enos Cabell and Mike Andrews' younger brother, Rob. Rob was the second baseman of the future and pretty much immediately replaced Tommy. After a year at backup, Tommy went to the Pirates for '76 to sub for Richie Hebner at third. He was then sold to Oakland and then traded back to Pittsburgh in a hugely populated trade that brought the A's two third's of that year's outfield. He finished out the season with Boston as a DH and then was done. Tommy finished with a .269 average with 34 homers and 477 RBI's. In the post-season he hit .241 in eight games. Defensively he is in the top 100 second basemen in career putouts and assists and in the top 65 for double plays and fielding percentage.

Helms stayed close to baseball following retirement, becoming a Texas coach for the '81 and '82 seasons after running his own vending machine business back in NC. In '83 he moved to Cincinnati where he would eventually be joined by his old pal Pete Rose and even did some managing stints for the Reds after Pete was suspended - for bumping an ump - and finally dismissed. Tommy went a combined 28-36 in that role. He then left the Reds at the end of the '89 season to manage in the Cubs system. He would then ten years later manage the independent Atlantic City Surf from 2000-2002. In those roles he went a combined 175-205. What he did during the Nineties or since AC is a mystery but in a 2010 interview he looks awfully good so I guess he did something at which he prospered. 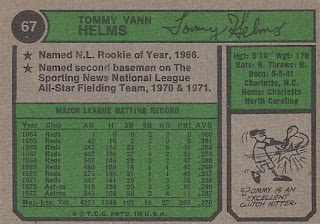 I like the signature; it has some flash but is still legible. It's a bit hard to check the cartoon data - at least for me - but Tommy had an awfully low strikeout ratio.

We are back to crossing leagues, so this exercise may add some miles:

One of the things Blogger does is keep data rolls on the Posts page summing up categories placed in the Labels box. The last post was the 66th card, or 10% of the set. I thought it might be interesting to see some of the totals and other data. Here are some tidbits:

Milestone-wise, there have been 13 rookie cards, eight Traded cards, seven cards that were the last ones for that player, and five guys who are now deceased, which I think is pretty good for 37 years down the road.

There have been four cards with the parenthetic names, four cards I have classified as ugly, and two guys who served in Viet Nam.


But the Astros are still the only guys pictured on the horse farm.
Posted by wobs at 9:13 AM