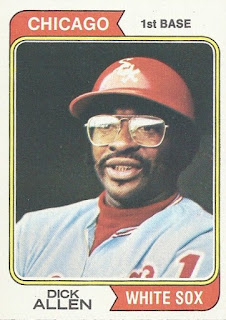 Dick Allen,as far as I was concerned, was The Man. He was my favorite player. From the batting helmet to the tape measure line drive homers to the fu manchu to the ball-busting way he dealt with all those inequalities in Philly, he was like Marlon Brando and James Dean and Joe Namath and Jim Brown rolled into one: a rebel who delivered. He must have been a pain in the butt to the front office guys, but why would a kid care about that? He was 5'11" and could touch the backboard over a foot above the rim (which means he had a vertical leap of about 42 inches), he could sing (he had a group that performed at Sixers games), he had a talk show, and he was just published on Night Owl's blog. His SI cover - the one where he juggles baseballs while smoking - was just named as that magazine's 29th best. He's still The Man. And this is the first card we get to see his face since his '71 Dodger card ('73 was an action shot away from the camera and '72 was taken around 1937). Dick appears to be on the bench here which was unfortunately a place he spent a considerable part of the season after getting run over by Mike Epstein. That injury killed what was shaping up as a pretty good follow-up to his MVP '72 year and pretty much derailed any hopes the Sox had of contending for the AL West title.

Allen was signed by the Phillies in '60 for $70,000, a huge sum back then and at the time the highest ever given a black player. He came from Wampum, PA and a family of nine kids and no dad. He had two brothers that also put in some big league time - Hank and Ron - but neither as successfully. When Dick was a kid, a spring flew off a screen door and hit him in his left eye, hence the glasses and his early nickname, Droopy. In the minors he progressed smoothly and in four seasons averaged .300 with a bunch of speed - 40 triples - and improving power. He also played everywhere: shortstop, second base, and the outfield. Being a northern kid, he did not get his first taste of southern hospitality until he played at Little Rock in '63 and wasn't allowed to get into the airport to get his own bag from the carousel. But he ended up winning over the fans there by hitting a ton and then got a short look at the end of that year and came up for good the following season. The Phillies were more-or-less set in the outfield, so they put Richie - as he was called then, over his objections - at third base. He responded with his super ROY season. He led the league in runs, triples, total bases, and strikeouts. He also led third basemen in errors by a pretty fat margin. Those last two stats were considered by his detractors to be pretty big chinks in the armor. But Dick, while aware of his K totals, was also comfortable with them as he later said it allowed him to figure out the pitchers; his seven seasons of .300-plus averages would seem to justify that. And his E totals were always accompanied by assists and putout totals near the top of the league. He also moved around position-wise a lot. For instance, just when settling in at third base - he knocked his E totals from 41 to 26 to about 15 in his first three seasons - the Phillies moved him to the outfield. But his offensive numbers stayed awfully good during his time in Philly: in '66 he missed twenty games and still had 40 homers and 110 RBIs; in '68 he had 33 homers and 90 RBIs during The Year of the Pitcher. But times were rough for Dick: the Thomas fight in '65, the hand through the headlight that severed nerves in '67, the racist taunts by the fans and the showering with objects that led to the full-time wearing of the batting helmet. Playing in Philly was tough back then for a black guy. Just ask...well, Dick Allen, since no other black guy at that point had lasted more than a couple seasons. All prompted Allen to seek an exit from Philly and he often expressed those requests by writing them in the sand around third and then first base.

In 1970, Allen got his wish, and he was sent to the Cards in the trade made famous by Curt Flood's refusal to report to the Phillies (they later got Willie Montanez). After a fine season there (he didn't like not being able to go to the track; they didn't like him stopping off at bars before games), he went to LA for Ted Sizemore. While his last years in Philly he had settled into the outfield, when he became itinerant, he also started moving around the diamond again. This was most true in LA where he split time pretty evenly between third, first, and the outfield. There was also a report that Walt Alston refused to manage Mr. Allen, so that all contributed to another short stay, although he led the team in homers and RBIs, both by wide margins. At the end of the year he went to the White Sox for Tommy John.

In Chicago, Allen had a homey manager from back in PA, Chuck Tanner, who let him be, and Allen responded with his MVP season in which he led the league in homers, walks, slugging, and RBI's. Ten more points on his average and he would have won the triple crown. '73 was a tough one for Dick: despite putting up some nice numbers, he went down in late June after a harsh collision with Mike Epstein. He finished that game and then found out he had a broken leg. He tried to come back in August but after a game in which he went 3 for 5, he had to sit out the rest of the season. In '74 he again led the league with 32 homers and hit .301 with 88 RBI's, despite "retiring" in early September to attend to his race horses. The trouble that time was that he and Ron Santo were at odds; Santo and maybe Wilbur Wood were probably the only Chisox guys that could mobilize fans successfully against Allen, but I cannot find any more info on that. After that season Dick went to the Braves for Jim Essian and $5,000 and then to the Phillies, again for Jim Essian and $150,000 (nice trade). This time there were no troubles off the field (at least not initially), but the magic was more or less gone and after two years in Philly during which he averaged a .248/14/55 line in 357 at bats - and his only post-season appearance - and a half season in Oakland in '77, he was all done. 351 homers, 1,100 RBIs, a .292 average, a .378 OBA, and seven All-Star appearances were his highlights. In the post-season Dick hit .222 with a .417 OBA in his three games.

Allen had a rough time of it after baseball, losing his horses to a fire and most of his baseball pension to his ex. Things began to come together in the mid-Eighties, though. He coached a year with Texas, began showing up at card shows, and published a well-received autobiography at the end of the decade. In the mid- Nineties he began doing some community work for the Phillies and has since been added to the team's hall of fame. He looked pretty good during an interview with Bob Costas last year on MLB Network, so I guess he's doing OK. 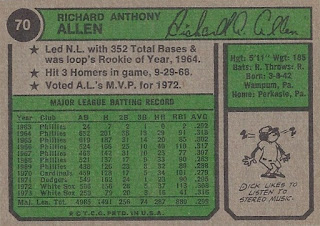 I already covered just about all the star bullets in my above homage. He says he signed his name Rich or Richard because nobody knew who Dick was. There's Wampum again, which was the name he used on his A's uniform. He had quadraphonic sound - remember that? - in his apartment in '73 so I guess he did like music.

So these two guys had the same colors on their cards and almost played together: