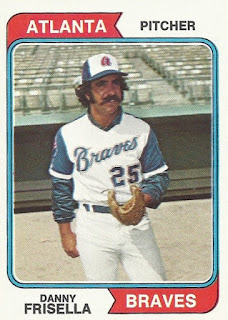 I think Danny Frisella is auditioning for the A's in this picture. This new mustache - it is the only time he had one on his card - would certainly fit right in with that crew and Lord knows the Braves weren't going anywhere fast. But he sure looks happy in Atlanta. And there weren't too many happy pitchers in Atlanta in '73 - the park was nicknamed "The Launch Pad" and produced some high ERA's. Danny was the ace of the pen despite his jumping by nearly a run; his eight saves led the team.

Frisella was a Cali kid, graduating from Serra HS in San Mateo in '63 after a big deal baseball career there. He then went to the College of San Mateo for a year before transferring to Washington State. There Danny continued to post some big numbers - 17-1 for his career - and in '65 led the team to the CWS. That spring he was drafted by the Braves but passed and then played ball that summer for the Goldpanners. He was the Goldpanners most valuable pitcher (he was 7-2 with a 2.13 ERA) which carries some significant weight when one realizes that Tom Seaver and Andy Messersmith were on that staff as well. Back at WSU in '66 Danny again made the all-conference team and was then drafted by the Mets, this time signing. A good year in the rotation in A ball that summer was followed by a better one - 11-5 with a 1.88 ERA and five shutouts - in '67 split between that level and Triple A. Those numbers got him up to NY where he enjoyed a typical season for Mets pitchers back then - a pretty good ERA coupled with a lousy record. In '68 he split time between the Mets and the minors. While he continued to be a starter at Triple A, where he went 4-2 in his seven games, as he had been for the bulk of his career to this point, in the majors he started coming out of the bullpen. In '69 he was primarily a minor-leaguer where he went 11-2 with a 2.76 ERA mostly in Triple A and for the Series champs put in only a couple innings.

Following the '69 season Frisella finished his military reserve work which had contributed to lost innings his previous three years. He also threw winter ball where he ran into Diego Segui, who taught Danny the forkball. After starting the '70 season in Triple A with another excellent rotation run, Danny and his new pitch came up for good in mid-season and hit his stride. He put up a save as the middle guy the rest of the way and then the next year joined Tug McGraw as co-stoppers in the pen. '71 was Danny's best season with twelve saves and that excellent ERA.While that number popped a bit in '72 and he ran into some arm issues, he still got it together to report nine saves. Following that season, Danny and Gary Gentry went to the Braves for Felix Millan and George Stone.

While NY made out pretty well with its half of the trade, Gentry's career went south pretty much immediately and Frisella had some tough times of his own. His '74 Atlanta follow-up season was a big discount to '73 as Danny's ERA popped another run and his saves total declined to six. After the '74 season he went to San Diego for Clarence Gaston. Though Danny continued as a pen guy for San Diego, his numbers were very similar to his '67 in NY - 1-6 with a very good ERA, this time 3.13. He also put up nine saves. Prior to the '76 season Danny was again on the move, this time to St. Louis for a couple minor leaguers. After not too much field time he went to the Brewers for outfielder Sam Mejias. For his second '76 team, he had a nice '76: a 5-2 record, 9 saves, and a 2.74 ERA in 32 games. He seemed to be back on a good track, but on New Year's Day 1977 he was killed in an accident in his dune buggy. Danny had a lifetime record of 34-40 with a 3.32 ERA and 57 saves in 351 games.In the minors he was 38-16 with a 2.60 ERA and nearly a strikeout an inning. 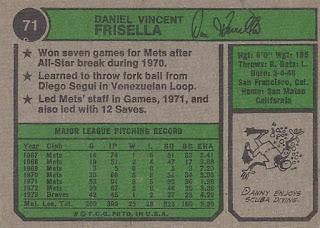 '71 was Danny's best season and was the only one in which he averaged better than a K an inning. I am hoping he didn't enjoy that scuba diving while with the Mets. I've done that in the NY area and all I've ever seen were a couple dead flounders. When Danny played ball at Washington State, one of his teammates was John Olerud, father to the future NY first baseman.

Let's use the other bullpen guy to link these two: