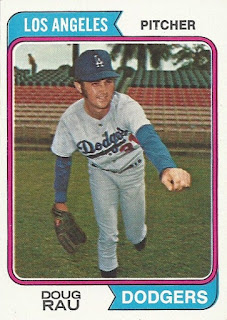 Doug Rau was one of the mainstay Dodger starters when the team won pennants in the mid and late '70's. This is his first solo card and I am pretty sure it is Holman stadium at Vero Beach, the Dodgers' spring training spot at the time. '73 was sort of a transitional season for Doug in that it was his rookie season and also the only one during which he was primarily a setup guy. He got some spot starts but inconsistent usage didn't help his stats too much so that he kept his ERA below 4.00 was pretty impressive. He also put up three saves. That would change in '74. Rau's pitching hand looks enormous in this picture. He also has the shortest name thus far. Also, the guy in the background looks like he's zipping up after relieving himself. But this is a post about a starter, not a reliever, so let's go.

Doug Rau was originally drafted by the O's in '67 but chose to go to Texas A&M where he still holds the school's lifetime ERA mark of 1.50. As a junior in '70 his ERA was another record 0.86 and he was an All-American. He was also drafted by LA in the first round and had a bang-up summer in A ball with some sick stats. He maintained the low ERA in '71 in Double A and watched it get a little fatter up a level that year. But that got fixed by another excellent record in Triple A in '72 that got him moved up for good - more or less - that September, leaving behind a minor league record of 38-15.

Rau began his MLB career in a spot role and continued his excellent ERA numbers his first month in LA. After his mixed rookie year  in '74 he moved into the departed Claude Osteen's spot in the rotation and his first year there went 13-11 while shaving 20 points from his ERA. From that year on, Doug was the main left-hander in the LA rotation and would contribute some very good pitching lines: 15-9 with a 3.11 ERA in '75; 16-12/2.57 in '76; 14-8/3.43 in '77; and 15-9/3.26 in '78. In '76 he finished second in the NL with his ERA number. His post-season success, though, was dubious at best and there is a famous verbal clip - it is on YouTube - of Tommy Lasorda yanking him from a '77 Series game (lots of f-bombs, so don't play it around the kids). Early in the '79 season Doug got hurt; from what I remember it was rotator cuff stuff. His productivity fell off a cliff. He won one game that year, took a stab at minor league rehab in '80 and got cut in early '81. He signed with the Angels, pitched horribly there, and was done before the '81 season was over. He finished with an 81-60 record with a 3.35 ERA, 33 complete games, 13 shutouts, and those three saves. In the post-season he was 0-2 with a 6.55 ERA in six games.

Rau had completed his A&M degree early in his pro career and then during it laid seeds for his life after baseball. He co-founded a firm called Crown Financial in Houston, a VC-type small business lender, where he remains a principal. 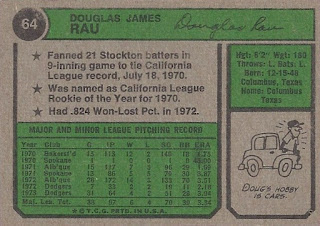 Another right-tilted lefty signature! I know I'm grasping, but I still find it an interesting phenomenon. The star bullets are informative but a little dry, as is the cartoon. What male wasn't into cars back then? Here's a tidbit: Rau married and is still married to the woman (girl) he met in first grade.

These guys miss being teammates by a year, but let's keep it all LA: