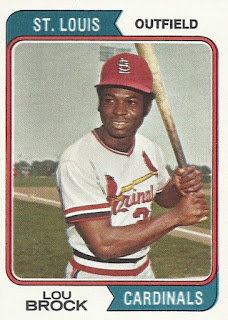 There has been very good representation so far in this set of some bad trades - Frank Robinson for Milt Pappas, Nolan Ryan for Jim Fregosi, Mickey Lolich for Rusty Staub - and here is a representative from another one. Midway through the 1964 season Lou Brock was traded from the Cubs to the Cards for a pitcher named Ernie Broglio. Lou would then be a pivotal player on Cards teams that went to the World Series three of the following five years. He would go on to get 3,000 hits, tons of stolen bases, and into the Hall of Fame on his first shot. Here he looks like a happy camper in what appears to be the Cards' spring training site. Like a bunch of his fellow Cards, Lou would have a tough start to the '73 season and at the beginning of May his average was sub-.240 and he only had three steals. But he would crank things up pretty quickly from then on and finish with an average just shy of .300 and yet again lead the NL with 70 stolen bases. 1974 would be the year he would go on to collect a then-record 118 steals.

Lou Brock grew up in Louisiana where he eventually became an HS baseball star and then won an academic scholarship to Southern University. At that school, things started tough as he lost the scholarship and hit only .150 his freshman year. But his sophomore year he led the school to an NAIA championship with his .535 average and after a junior year in which he hit .370 he was signed by the Cubs that summer of 1960 for a pretty good bonus. Picked up too late to play that year, in '61 Lou had a C ball season in which he hit .361 with 117 runs, 38 steals, and 82 RBI's from the top of the order. That was enough of an audition for Chicago and in '62 he was promoted way up to the majors.

The Cubs of the early Sixties had some good sticks in the lineup but not too much pitching. The team also employed a sort of manager-by-committee system that didn't produce very good records and almost no real guidance for young, raw players like Brock. For a guy whose primary game was speed, Lou could bang homers and during his career would sport the high strikeout numbers that came with that skill. So while his rookie numbers were pretty good, Lou had a tough time trying to figure out what kind of hitter he was supposed to be. And on defense he put up a few too many errors in center. So offensively his sophomore year was not an improvement to the prior one and with the trade of George Altman Lou was moved to right, a bad sun field at Wrigley, which made fielding even more frustrating (though with his speed Lou came in second in the NL in both putouts and assists). After a discounted beginning to the '64 season, the Cubs - still hurting for pitching - made the June swap for Broglio, a big winner in years past for the Cards (to be fair the Cubs also got other players including former MVP Bobby Shantz). Poor Ernie never got things going for the Cubs while for Lou it was a whole other story.

Brock went on a tear in his new home to finish with a .348 average for St. Louis, ably filling the functional void left by Stan Musial's retirement the prior year. His speed would be the catalyst to take the Cards to the Series where they won memorably over the Yankees. Defensively, he would take over left field. In '65 he really began ratcheting up the stolen bases with 63 and in '66 he won the first of his titles in that department with 74. '67, another Series season, would be one of his best offensive ones as Lou led the NL with 113 runs and 52 steals while setting personal bests in homers and RBI's. In '68 his doubles, triples, and 62 steals led the NL as he saw his final Series action. '69 was a disappointing year for St. Louis but not because of Lou as he kept his numbers up and led the NL with 53 steals. He gave up the title by a couple bases in '70 to Bobby Tolan but that year began a run of six of seven .300 seasons. '71 saw Lou top out with 126 runs in his final 200 hit season and a return to the All-Star game while in '72 the runs came in a bunch but nothing else did.

'74 was another big season for Brock. The Hank Aaron home run record chase ended early in the season when Hank topped the Babe. So when Lou decided to chase another record in Maury Wills' stolen base one, he had a lot of eyes on him and sort of smashed through the record. That would be his final year of leading the league. In '75 and '76 he kept the average above .300 and the stolen bases above 50 while in the next two seasons Lou showed his age. But he had a big year in '79, moving his average up over 80 points to .304 while returning to the All-Star game and recording his 3,000th hit. He won the NL Comeback Player of the Year in what would be his final season. He finished with 3,023 hits, 938 stolen bases, and a .293 average. He also hit 149 homers. In the post-season Lou's numbers were pretty amazing: .391 with four homers, 13 RBI's, 16 runs, and 14 stolen bases in 21 games.Defensively the once-challenged outfielder is eighth all-time in left field putouts, 23rd in assists, and 27th in double plays.

In David Halberstam's book, "October 1964", he devotes the preface to a description of Brock's time with the Cubs. It is a significant narrative on how Brock viewed baseball and played the game: he took copious notes on his game and opposing pitchers; he was so driven to succeed that he worried his roommate, Ernie Banks; he desperately tried to make himself a better fielder since right field in Wrigley was a notorious sun field and he had never learned how to play in the sun. When he moved to the Cards it was pure freedom for Brock; he was allowed to run whenever he wanted, he was allowed to swing freely and not be restricted by typical lead-off man demands. It all paid off pretty well. 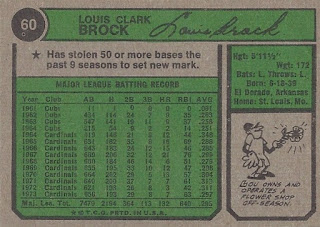 Nice numbers on the back. Those consecutive years of 50+ stolen bases would reach a total of twelve. Brock led the NL in steals every year from '66 to '74 except 1970 and was an All-Star six times. His signature is another one with a reverse lean. The cartoon is actually significant. Brock turned that flower business into a great success and source of wealth. A driven guy, indeed.

I am going to re-use another guy also mentioned above: