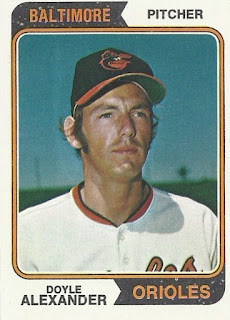 I need to get going this month after a pretty poor showing in November (only 11 posts). It was a crazy busy month so I am going to try to step it up now. We lead off December with this guy who I will always remember from his partial season with the Yankees in '76. It seemed that year in just about every other start he would take a no-hitter into the seventh inning. He had a pretty good run that year for NY, helping the Yankees get to their first post-season appearance in 12 years. It was a habit he would continue later in his career.

Doyle Alexander was born and raised in Alabama and was drafted and signed by the Dodgers out of high school in '68. He had a rough start that season in the low minors but turned it around up a level in A ball in '69. The next two seasons he would put up quite good numbers in the rotation for Double A Albuquerque and Triple A Spokane, undoubtedly helped by the monstrous lineups those teams featured. He came up top in mid-'71 into the rotation and pitched pretty well. After the season he was involved in his first big trade, joining a bunch of minor leaguers in a swap to Baltimore for Frank Robinson and Pete Richert.

For the Orioles Alexander would move between the rotation and long relief the next few years. Although his ERA was pretty high by AL standards, he posted his best season for the O's in '73 when he got his most starts for them. In '74 and '75 he pitched mostly out of the pen and after a 3-4 start to the '76 season he was part of another big trade, going to the Yankees with Elrod Hendricks, Grant Jackson, and Ken Holtzman for Rudy May, Rick Dempsey, Tippy Martinez, and Dave Pagan. For NY Doyle went 10-5 strictly as a starter the rest of the way. He would get shutout from pitching in the playoffs and lose his only start against the Reds. Following the season he would be signed as a free agent by the Rangers.

For Texas, Alexander recorded his best season to date, going 17-11 with a 3.65 ERA to lead a surprising team in wins. Texas' fortunes faded the next season as did Doyle's and his record fell to 9-10 and then 5-7 in a '79 during which he was injured. Doyle was sort up serially unhappy with his contracts and he then began a pretty itinerant part of his career going to Atlanta in '80 (14 wins) and San Francisco in '81 (11 wins with a 2.89 ERA in the strike season) before returning to NY in '82. The return trip didn't work out too well as injury and ineffectiveness led to a 1-9 record and a release early in the '83 season. But that June Toronto grabbed him as a free agent and after a couple games in the minors they brought him up. He then went 7-6 in a little under half a season, as the start to the best run of his career. In '84 and '85 Doyle won 17 each season as the Blue Jays moved into contender mode. In the middle of the '86 season he was sent to the Braves for Duane Ward. Similar to his Yankee experience the return wasn't so hot and after going 11-16 in a little over a season Doyle was sent to the Tigers in August of '87 for a minor league pitcher. He energized Detroit for its stretch drive, going 9-0 with a 1.53 ERA in eleven starts and twice beating his former teammates in Toronto to put Detroit into the post-season. It was an amazing run that ended in the playoffs when he went 0-1 with an 8.71 ERA in two starts against the Royals. And to top it off, the minor leaguer for whom he was traded turned out to be John Smoltz.

In '88 Alexander went 14-11 for a Detroit team that crashed and burned, making his first All-Star team after an 8-4 start to the season. After going 6-18 in '89 he retired, leaving behind a record of 194-174 with a 3.63 ERA, 98 complete games, 18 shutouts, and three saves. His post-season numbers weren't so hot: 0-5 with an 8.83 ERA in six games. But when you add in his clutch numbers for Detroit, Toronto, and the Yankee pennant drives, his numbers at crunch time get pretty good. After he played Doyle's activities are a bit of a mystery and all a day of looking has got me is that he apparently still resides in Arlington where he may or may not be involved in insurance. 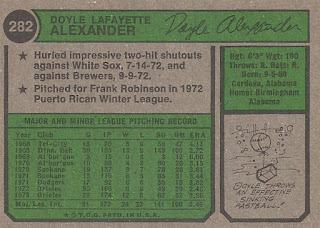 That second star bullet is pretty ironic due to the first big trade. Doyle was a groundball specialist and pretty much all his pitches were sinkers, including a curve and a changeup. I checked baseball-reference to see how accurate my memory was of Doyle's '76 season in NY. Three times with the Yankees he went deep into the game not yielding any hits: on June 24th against Cleveland he went seven; on July 23rd against Boston he went eight; and on August 2nd against Detroit he went six and two-thirds.

On December 1 of '73 the Carpenters took over number one in the States with "On Top of the World," an appropriate title. They were always on TV back then, and it used to crack me up that she was the drummer in the group. It wasn't until much later that the tragedy of her anorexia came to light.

So they share colors but let's see how quickly Doyle gets with the Giants: