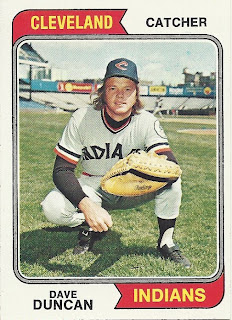 Dave Duncan shows his crouch at Yankee Stadium with a wry look on his face. Dave may be thinking about life with the Indians during his first season there as his old teammates in Oakland were on their way to another Series title. (This is the second time re-writing this post since Blogger crashed when I was publishing it the first time. Just venting but I'm pretty pissed - an hour down the tubes.) During spring training in '73 Dave had some bitter contract negotiations with A's owner Charlie O and - boom - he got sent to Cleveland with George Hendrick for Ray Fosse and Jack Heidemann. And to top it all off in the middle of what was shaping up to be his best season he broke his wrist and missed a bunch of time. It sort of went that way for a while for Dave but eventually he got the last laugh. While he may not be a Hall guy like the subject of the last post he would help a couple other guys get there as a pitching coach extraordinaire. But let's not get ahead of ourselves.

Dave Duncan was a big old boy from Texas but moved to San Diego as a kid and from there was signed by the Kansas City A's in '63 out of high school. That summer he only hit .145 in A ball but was already demonstrating an excellent ability to handle pitchers. The next season he was pulled all the way up to KC to protect him from the Rule 5 draft. He didn't see much action and in '65 he returned to Single A where he put up much better offensive numbers. Halfway through the season he got promoted to Double A but was over his head offensively, showing some power, but a low average and way too may strikeouts (73 in 192 at bats). So in '66 it was back to A ball where Dave surprised everyone by hitting 46 homers - the most in any level of organized ball that year - with 112 RBI's. That got him moved up in '67, first to Double A where he hit .241, and then to KC where he got some late starts. Then in '68 after a .316 bit at Triple A, Dave got the starting gig in the new home, Oakland. But while his .191 average was the best of his career to date, it wasn't good enough to hold the top spot and in '69 he moved behind Phil Roof in the lineup. It proved to be a good move since his average took a dive. In '70 Roof moved to Milwaukee and Dave shared starting time with Frank Fernandez, another good power but low average catcher Oakland picked up from the Yankees. Despite missing time that year to the service also, Dave put up his best career average and cut the strikeouts way down. In '71 he was back to number one and reached a career milestone when he was selected for the All-Star team. By that time it was no secret that under Dave's watch the Oakland pitchers had done some seriously good work on their ERA numbers. He also got to his first post-season and hit .500 against Baltimore in the playoffs. Then in '72 although the average fell he put up his best power numbers. But the last month of the season Gene Tenace pretty much monopolized the catching work and Dave got only seven post-season at bats. Then it was off to Cleveland.

After his mixed '73 season, Duncan stayed healthy in '74 and recorded career highs in games (136) and at bats (425). But his offense tumbled, particularly his average, which returned to Mendoza levels. Prior to the '75 season he was sent to the Orioles for Boog Powell and Don Hood. For Baltimore, Dave would retain the number one spot - Andy Etchebarren had been traded to California - for most of his stay. But while the power was pretty good, the average stayed around the .200 level and by the end of the '76 season Rick Dempsey, another acquisition from NY, took over the top spot. Over the winter Dave was sent to the White Sox for Pat Kelly. But after not making it out of spring training he retired, finishing with a .214 average, 109 homers, and 341 RBI's. In the post-season he hit .308 with two RBI's in seven games.

Then came the magic part of Duncan's career. After a year off he returned to Cleveland to coach in '78. While that first gig didn't result in a lot of wins, it did provide one colorful story (courtesy of "The Curse of..."). During the '79 season Dave Garcia replaced Jeff Torborg as manager and Garcia was holding a players' meeting in the locker room when Cliff Johnson began grumbling about his lack of playing time. When Garcia asked him to quiet down Heathcliff got up and moved toward Garcia in protest. Duncan then sprang out of nowhere to knock Cliff into his locker - pretty impressive given that Johnson was about 6'5" and 230 - leading the big catcher to re-think his debating strategy and grab a seat. Dave remained with Cleveland through '81 and then moved to Seattle for '82. In the off season he hooked up with old A's teammate Tony LaRussa and the next year began a working relationship that only ended this year: the White Sox ('83 to '86); Oakland ('86 to '95); and St. Louis ('96 to present). Dave was a pitching coach extraordinaire at all those stops, coaching four Cy winners along the way. He remains under contract to the Cards, despite LaRussa's retirement. 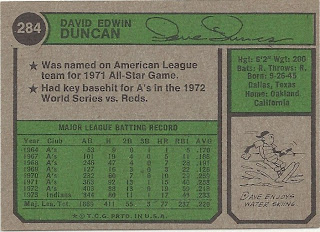 Dave has a great signature. He could probably have another star bullet and that 46 homer season sure would have looked good. Regarding the second bullet listed, Dave had a pinch-single with a man on and one out in the bottom of the ninth in the fifth game when Oakland was down a run. But the next batter, Bert Campaneris, hit into a double play, ending the game. So I don't know what Topps means by "key basehit." Clutch, yeah, but Dave's hit had zero impact on the outcome of the game.

To hook Dave up with Mike we need a league-changer: