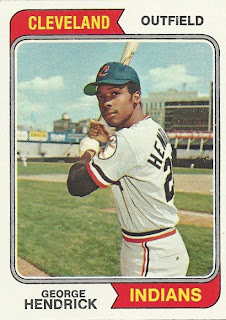 We're closing out the year with one last Yankee Stadium shot. George Hendrick strikes a mellow pose during his first season for his new team. Unlike fellow tradee (that probably isn't a real word) Dave Duncan, George was never able to wrangle a regular spot back in Oakland. So while it would be a long time before he would again see any Series action, that was probably OK with him since he traded the rings for a bunch more playing time. I say probably because back then George wasn't a big fan of the media so it is pretty tough to find anything he actually said. Ironically, though, he was a very stabilizing and helpful influence in the locker room and lots of fellow players were big fans. But not all of them.

George Hendrick grew up in LA and attended John Fremont High School there where he didn't play any sports (?!!). He then attended East Los Angeles Junior College - where he also didn't play baseball - and was the first draft pick in the January '68 draft by Oakland. I guess he played baseball elsewhere. The draft was interesting for a couple reasons. When Oakland took George their spokesperson said he thought he could be "a good average baseball player." Talk about low expectations. The draft also produced Glen Adams and Mickey Rivers later in the same round. The second player drafted was a pitcher from the University of Alabama named Ken Stabler. That guy picked a different sport. Meanwhile our boy here got his start that summer in A ball where he stayed halfway through '70. His averages were quite good but his power was inconsistent. He moved to Double A the second half of '70 then moved to Triple A for '71 where he put up excellent numbers. Those got him a mid-season promotion to Oakland where he put in a few games at each outfield position. In '72 he got a few starts in center while Reggie was hurt and then pretty much took his place in the post-season where he scored the winning run against Detroit but only hit .133 in the Series. Prior to the '73 season he was sent to Cleveland with Dave Duncan for Ray Fosse and Jack Heidemann.

When Hendrick moved to the Indians he really raised the bar performance-wise. In four full seasons there he averaged 22 homers and 74 RBI's while nabbing two All-Star selections. He provided the best outfield offense since Rocky Colavito was hot and began doing his mentoring thing in earnest. His one demerit was that he was sometimes viewed as a loafer. Among his nicknames were "Silent George" - for the whole press thing - and "George the Jogger." The book "The Curse of..." details a time he misplayed a fly ball that made pitcher Gaylord Perry so infuriated he announced that George would never play behind him again. But George outlasted Gaylord by a few months. After the '76 season he moved to San Diego in a trade for Fred Kendall, Johnny Grubb, and Hector Torres. George's first season for the Padres was a step up from his Cleveland days - .311 with a career-high .382 OBA, 23 homers, and 81 RBI's. But after a crappy kick-off to '78 he was traded to the Cards for Eric - or Harry - Rasmussen.

Hendrick experienced an immediate revival for St. Louis, raising his average over 40 points and tapping 17 homers and 67 RBI's in about two-third's of a season. After a '79 in which he was part of a four-starter outfield and his stats shrunk a little, he put up a bang-bang season in '80 with career-best 25 homers and 109 RBI's with a .302 average. He won the Silver Slugger that year for right field. After a pretty good year in the strike-shortened '81 he again pushed the RBI total over 100 in '82 despite missing time with elbow and leg injuries. He then put up a nice post-season with a .317 average and seven RBI's in ten games for the Series winners. In '83 the Cards traded Jack Clark and George took over first where his .318 with 18 homers and 97 RBI's won him another Silver Slugger. In '84 injuries helped pull down his numbers as he returned to right field. After the season he was sent to the Pirates with Steve Barnard for Brian Harper and John Tudor in a huge trade for St. Louis. With Pittsburgh George really couldn't get it going and that August he went back to the AL, moving with John Candelaria and Al Holland to the Angels for Mike Brown, Pat Clements, and Bob Kipper. But the late-season magic wasn't there this time and he only hit .122 the rest of the way. In '86 he settled nicely into an outfield reserve role for the division winners. After playing reduced roles the next two seasons he retired. George finished with a .278 average with 267 homers, and 1,111 RBI's. In the post-season he hit .227 in 23 games. He played in four All-Star games. 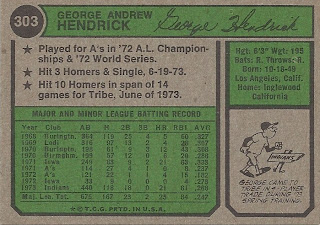 George's three homers were consecutive in that '73 game. Given the cartoon it seems he wasn't exactly a font of information for the Topps guys either. George would have some interesting cards down the road. His '75 card looks like it was taken seconds after this one and in '76 and '77 he opts for a Cleveland visor instead of a hat or helmet. Seems like he marched to his own drum.

Speaking of music, on New Year's Eve '73 two big concerts took place miles apart. In NYC local bands Kiss and Blue Oyster Cult had their first gigs in a large venue, the Academy of Music - later known as the Palladium - on 14th Street. Over in Sydney a band pefrormed its first concert at a club: AC/DC made its debut. In '74 Lindsey Buckingham and his girlfriend Stevie Nicks joined Fleetwood Mac, forming the version of the band that would hit it huge in a couple years.

These two guys certainly faced each other a bunch of times: