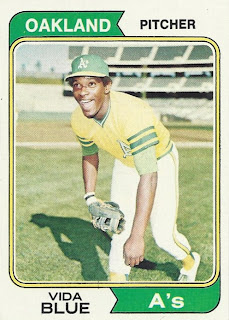 Now this is one of the things I like about Vida Blue, at least in his early days. Nobody had a bigger smile on his cards than this guy did in the '71 and '74 sets. Plus he had that great name and in '71 he was a rock star baseball player. With Vida back then it was all good. At least until it wasn't.

Vida Blue was a big high school baseball and football star - more about that on the back - in Louisiana and was drafted by Kansas City as a second-rounder in '67. The next summer he began his career in Single A and while he only went 8-11 in 24 starts he put up a 2.49 ERA, fired a no-hitter, and led his league with 231 strikeouts in only 152 innings. In '69 he sandwiched a 10-3 year in Double A around some late-summer innings up top and the next year stepped it up by going 12-3 in Triple A with a 2.17 ERA before being called up for good early that September. Then things started happening.

In Blue's first start he shut out the Royals on one hit. Then after a no decision he faced the division-leading Twins and threw a no-hitter, only giving up one walk to Harmon Killebrew. But those games were just a prelude to '71. After an off-season Army hitch, that year at 22 Vida became the youngest Cy Young winner - he is still the youngest AL one - by going 24-8 with his 1.82 ERA. The season began even better: after a late June shutout of the Royals (seven hits and 12 strikeouts) he was 16-2 with a 1.37 ERA. Although he had a late-season fade that culminated in a loss to Baltimore in the playoffs, Vida had an amazing MVP season and was a big-time celebrity. Before the '72 season he held out - he'd made about $15,000 in '71 - which delayed the start of his season that year. That plus a nagging shoulder problem led to a significant downtick in numbers that season. Then in the post season he would lose his only start but he put in a lot of good time in the pen. In '73 he returned to the 20-victory level and had a nice year but the big K totals were done. After winning 17 in '74 he won over 20 one last time with 22 victories in '75. In '76 he went 18-13 with a 2.35 ERA in what may have been his overall best season since '71. He would probably have had a few more decisions if in the wake of a failed sale to the Yankees, owner Charlie O hadn't sat him for a couple starts. By the end of that year only he and Billy North were left of any of the players who made significant contributions to the five past division winners. In '77 he went to the All-Star game for the third time in what would otherwise be a forgettable season: 14-19 with a relatively - for Vida at least - high 3.83 ERA. Oakland was a mess that year and after the season Vida went across the bay to the Giants for seven guys, the first one for seven trade ever.

In San Francisco Blue enjoyed a revival. He got off to a fast start in '78 and by the All-Star break was 12-4 with a 2.42 ERA. He was named that year's starter becoming the first pitcher to start the game for both leagues. He finished the year 18-10 and probably would have won the NL's Comeback award had not Willie Stargell had an even bigger turnaround. In '79 Vida went 14-14 as his ERA ballooned by more than two runs, probably because of continued shoulder problems. In '80 and '81 he was back to being an All-Star with sub-3.00 ERA's and a combined 22 wins ('81 was the strike year). After the '82 season he was sent to the Royals for four guys.

Back in the AL Blue would go 13-12 for a team between pennants. But in '83 it all hit the fan. On top of horrible stats - 0-5 with a 6.01 ERA - Vida would be busted for cocaine usage along with a bunch of other big leaguers and be forced to sit out the entire '84 season as well as do some jail time. Cut by KC during the '83 season he signed for '85 as a free agent back with the Giants. In '85 he went 8-8 and in '86 10-10 with a 3.27 ERA. The following January he signed back with Oakland as a free agent but before the season began he retired. While initially the rumors were that the retirement was fueled by more drug usage, Vida made a strong case for himself as to the unlikelihood of that since he was still constantly monitored by the authorities. His arm was done and he didn't think he could pitch effectively any more. Blue finished with a 209-161 record with a 3.27 ERA, 143 complete games, 37 shutouts, and two saves. The post-season was a lot tougher on him: 1-5 with a 4.31 ERA with two saves in 17 games. But he still got three rings.

By the late Eighties, Vida was back with the Giants, doing some coaching and working in the community relations department. He played in the Senior Leagues when it was around and also co-authored a couple books. He did a bunch of charity work as well. In the mid-2000's Vida had a relapse of sorts and after being busted a few times on drunk driving and then a parole violation lost his gig with the Giants. He did time in a halfway house and a work release. When he came out he was able to get a community work position with Oakland and re-start his charity work. I have linked to a nice piece here about his admittance into the Jewish Sports Hall of Fame (?!! - it's explained in the article). 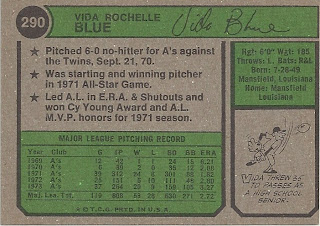 I touched on all the star bullets above. That cartoon is pretty amazing. He also apparently himself rushed for 1,600 yards that season which seems crazy but who knows. That must have been a hell of a team. Vida passed up a football scholarship to the University of Houston to play ball. The middle name makes the full one even better. At one point Charlie O wanted Vida to change his first name to "True" but Vida nixed that one fast. It has always been tough for me to reconcile this fun-loving guy with the one described in some books as constantly calling out his Oakland teammates, particularly John Odom, who Vida was described as regarding an Uncle Tom type. That never seemed fair.

Vida gets the hook-up here with a Brewer, a team against which he had pretty good success: