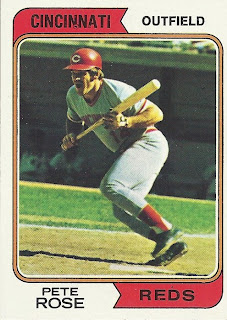 Pete Rose brings us back to the action shots, his just after he apparently dragged a bunt down the third base line at Shea. Pete has the fourth Reds action shot taken at Shea so far - Billingham, Bench, and Clay Carroll have the others - and given the size of the crowds I have been tempted to say they are playoffs shots. Billingham and Carroll did pitch in game five but in Bench's shot it looks like he hit his down the third base line and Seaver appears to be on the bench. But Bench hit only against Seaver in that game. Plus I have seen no obvious Rose at bats in any of the Shea games that would be a bunt situation. So I may be reaching. In any case, '73 was one of the best seasons of Rose's excellent career at this point and for all his hits - nobody else in the Seventies except Joe Torre in '71 and Rod Carew in '77 had as many - and for sparking the Reds to the division title he won the NL MVP. I think the most surprising thing about this card is that it only represents about halfway through Pete's career.

Pete Rose was about as local as you can get for a future Red. He was born and raised in Cincinnati and played football and baseball in high school. In the latter sport he would frequently play second base and his DP partner was Ed Brinkman, who was the more sought-after player. Pete's dad was a big athlete - he played local football for the first Bengals team - and he had Pete stay back a year in high school which meant he was ineligible to play his senior year. Instead he played for a local amateur team and in the summer of 1960 he was signed by the Reds. That summer he played D ball and hit .277 while playing second and third. The next year he upped his average to .330 - with 30 triples - while playing exclusively second and in '62 he hit for the same average in A ball. In '63 he was named second baseman on the Reds, replacing incumbent Don Blasingame (and pushing aside a young Cookie Rojas).

Rose started his Major League career strongly, allowing his hustle to replace some defensive inadequacies at second, and putting up a pretty good average. He won NL Rookie of the Year, and had one of the top OBA's on the team. He did his military hitch during the off-season and in '64 experienced a bit of a sophomore jinx, spending some time on the bench. He came back strong in '65, leading the NL in hits and boosting his OBA to .382. He made his first All-Star team and recorded the first of what would be nine straight .300 seasons. In '66 the Reds traded Frank Robinson and though Pete again had over 200 hits the team sort of had a crap year. So in '67 they moved people around a bunch and '66 ROY Tommy Helms moved to second as Pete took over left field. In '68 Tommy Harper moved to Cleveland and Pete moved to right field, where he stayed through '71, and won his first batting championship. In '69 he had probably his best offensive year, adding a .428 OBA to his NL-leading average and 120 runs. He also won his first Gold Glove. In '70 he got his first post-season experience and in '72 he led the NL in hits for the fourth time. That year with the acquisition of Cesar Geronimo, who had a stronger arm, Pete returned to left field. From '74 to '76 Pete led all of baseball in runs and doubles and the latter two years won two Series rings. A big part of the Reds' success those two seasons was Pete's move to third base which both plugged a defensive hole there and allowed George Foster to become a full-time outfielder. After two more excellent seasons - the last in which he recorded his 3,000th hit - Pete left Cincinnati as a free agent and signed with the Phillies.

Rose's first season in Philly in '79 saw him hit .331 with a .418 OBA. Since the Phillies had Mike Schmidt at third, Pete took over first base. The next season his average fell to .282 but he turned it on in the playoffs against Houston and won another ring against the Royals. In '81 he led the NL in hits for his last time with 140 in the strike season and hit .325, also the last time he would hit over .300. His average moved significantly lower the next couple years and after an '83 in which he hit .245 he was released. But at age 43 Pete was within a few hits of 4,000 so Montreal picked him up. As planned, he got his 4,000th as an Expo and then returned to Cincinnati in a mid-season trade for Tom Lawless. After hitting .365 the balance of the '84 season Pete, now the manager as well, played himself as the starting first baseman in '85, allowing him to break Ty Cobb's hit record that season. After a short '86 he was done as a player. He finished with a .303 average on 4,256 hits, 2,165 runs, 756 doubles, 160 homers, 1,314 RBI's, and a .375 OBA. He hit .321 in 67 post-season games. He made 17 All-Star games, won two Gold Gloves, and a Silver Slugger and led the NL in hits seven times, doubles five times, runs four times, and average three times. He had over 200 hits ten seasons.

Rose managed the Reds from '84 to '89, going 412-373 for his career. In '89 he ran afoul of commissioner Bart Giamatti for allegedly betting on baseball games - possibly including his own - charges he initially denied but has slowly taken responsibility for over the years. The '89 agreement he forged with baseball banished him from association with the game and so far has wrecked his chance for election to the Hall. He was also busted for tax evasion and served some jail time in the early Nineties. He has since written a couple books, pleaded his case for reinstatement, and supports himself through appearances and memorabilia sales. 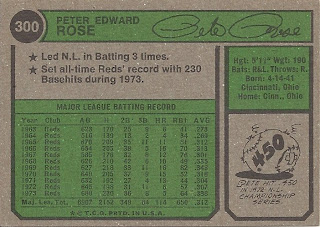 Pete has a great card back deserving of the milestone card in this set. He would only hit .214 in the '72 Series. An interesting record he has is the most career RBI's for a player that never hit 100 or more in a single season.

We'll use some old guys for this hook-up: