Bob Montgomery opens up what will be a string of shots taken at Yankee Stadium. Here he shows a passing resemblance to Kevin Spacey in his "Usual Suspects" mode. Bob is coming off his arguably best offensive season in '73 and played the bulk of his career as the Boston back-up catcher of the Seventies. Carlton Fisk was relatively healthy in '73 so Bob's at bats were not terribly high. But that wouldn't always be the case.

Bob Montgomery grew up in Nashville and was signed out of high school by the Sox in '62. In high school he played pretty much every position but catcher and that summer he kicked things off in D ball as outfielder/third baseman. He then stuck to third when he moved up in '63 to A ball, posting pretty good power numbers. But his fielding was pretty challenged and when a coach opined that his power was lagging behind a couple other corner prospects - Joe Foy and Rico Petrocelli - Bob switched in '64 to catcher. There he had another good A ball season offensively and made the all-star team at his new position. In '65 he took a step back production-wise but the next season he improved his average significantly in Double A and Triple A. From '67 to '70 he played at Triple A. The first couple seasons despite awfully good offensive numbers he didn't get up too much. Some of this was due to military duty; more of it was due to Jerry Moses. In '69 and '70 Bob took over the starting gig for Louisville and put up excellent numbers. Late that '70 season he got his first look up top at a relatively old 26.

After his few at bats in '70 Montgomery returned the following season expecting a bunch more playing time in the wake of Moses' trade to California. But the Sox picked up Duane Josephson from the White Sox and while Bob got a bunch more at bats he was still the second guy. He retained that position after Fisk arrived for good in '72 and Josephson moved to first base. After his super sub work in '73 he got the number one gig in mid-74 when Fisk went down with an injury. His average slipped to .252 and his strikeout totals were a bit high but he did a nice job defensively and he retained his position to open the '75 season after Fisk broke his hand in spring training. Again the average slipped and once Fisk was healthy Bob's workload dropped to almost nothing. He did get an at bat late in the Series (he grounded out). From '76 to '79 Carlton stayed healthy much of the time and Bob's at bats remained low, although twice during that time he hit .300 or better. In '79 Gary Allenson became the number two receiver and after that year Bob was allowed to leave as a free agent. But there wasn't a big demand for 35-year old back-up catchers so he retired. He ended things with a .258 average, 23 homers, and 156 RBI's. His whole career he never wore a batting helmet.

Montgomery returned to Boston shortly after playing as a journalist, initially filling in on local telecasts. In '82 he took the color job on a local station after the first choice, Tony Conigliaro, suffered a stroke. Bob kept the color job through '95 when the station ended its affiliation with the Sox. He later moved to a job with Big League Promotions, which I believe he still has. 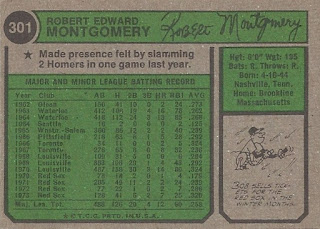 Bob's another guy who has a long list of minor league stats. Down there he hit .276 for his career with 66 homers and 432 RBI's.

In music news, 1974 saw a new number one in the States, Helen Reddy's "Angie Baby." Helen was on a pretty good run after her big hit "I Am Woman" put her on the map in '72. She and fellow Aussie Olivia Newton-John were pretty prominent back then. No comment.

Bob and Pete get together via a league-crosser: