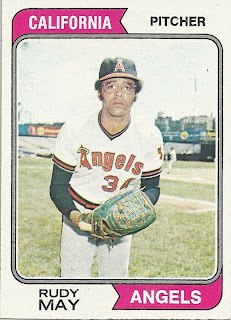 In our next Yankee Stadium shot we get Rudy May, another player who would make this stadium his home base eventually. Rudy looks dead serious here and a quick look at his season may tell us why. In '73 Rudy started the season 6-6 with a 2.91 ERA. Four of his wins were shutouts and he seemed on his way to a pretty good season when he hurt his back. The injury occurred when he tripped over his dog while grabbing a late night snack, just to add a bizarre aspect to the story. After spending some time in traction he was rushed back, hurt his leg, and went 1-11 with an ERA well above 5.00 the rest of the way. That would put the damper on anyone's urge to smile. At least his big blue mitt looks cheery.

Rudy May was born in Coffeyville, Kansas, the same town from which Walter Johnson hailed. As a kid he moved to California and went to the same high school - where he was all-Oakland in football - that his Angel teammate Frank Robinson attended. Rudy was signed by the Twins in '62, too late to play that season. So in '63 he went to A ball where he went 11-11 and was then picked up by the White Sox in the first year draft. For Chicago he split the season between A and Triple A ball, going a combined 17-8 with a 2.61 ERA and 235 strikeouts in 207 innings. Rudy by then had a wicked curve and a running fastball but back then the Sox were awash in good young pitchers so after the season they sent him to the Phillies for catcher Bill Heath. Philly then turned around and sent Rudy to the Angels for Bo Belinski and in '65 Rudy got promoted all the way up. His first start against Detroit he threw no-hit ball into the eighth inning and finished with a one-hitter. The rest of the season didn't go that well but he showed promise and in '66 he put some time in at Double and Triple A around a military hitch. He had some control issues so in '67 he moved back down to Single A and went 7-2 with a 3.11 ERA. In '68 he moved up to Double A and went 8-7 with a high ERA but did pull his K mark much higher. In '69 he returned to the majors.

May would have a pretty good run for California the next four seasons. Although his record was only 40-49 his ERA was considerably better than league average and he was the most consistent starter on the staff during his time there. Both Tony Oliva and Rod Carew would later say that Rudy was the pitcher they each least liked to face. After his '73 experience and a decaying relationship with manager Bobby Winkles - Rudy blamed him for pitching him too soon after the injury - Rudy was moved to the pen to kick off the '74 season. That June he was sold to the Yankees, for whom he went 8-4 with a 2.28 ERA in the rotation the rest of the way. His numbers potentially could have been bigger but that summer he got his spikes caught in the turf in Kansas City and fractured his hip in a fall. The Yankees lost the division by a couple games and Rudy's mid-season injury was viewed by many as costing them the title. In '75 he enjoyed his first injury-free season in a while and won 14. After a 4-3 start to open the '76 season he went to the Orioles in a big trade with Dave Pagan, Tippy Martinez, Scott McGregor, and Rick Dempsey for Elrod Hendricks, Grant Jackson, Ken Holtzman, and Doyle Alexander.

May would win 11 for Baltimore the rest of the way and then 18 for them in '77. After the season he was involved in another big trade: he, Randy Miller, and Bryn Smith to the Expos for Joe Kerrigan, Gary Roenicke, and Don Stanhouse. That trade would work in the O's favor as two of the new guys were integral parts of the pennant winner in '79 and Rudy got hurt, dropping his win total by ten in '78. Moved to the pen for most of '79, he put up nice numbers - 10-3 with a 2.31 ERA. After that season he became a free agent and signed back with the Yankees. Rudy's first season back in NY was a big one. Splitting time between the rotation and the pen he went 15-5 with an AL-leading 2.46 ERA. He also got his first taste of post-season experience that year. In '81 he moved back to the rotation almost full time but things went awry as his record almost reversed itself to 6-11 and his ERA shot up. After a nice return to form in '82 as a swing guyn he got hurt early in the '83 season and missed all of '84. Interestingly when the White Sox lost pitcher Dennis Lamp to free agency following the '83 season, they first opted for Rudy as compensation. But he had a no-trade clause in his contract, forcing the Sox to look elsewhere. They didn't go far, snapping up Tom Seaver instead. Seaver went on to win 31 in two seasons for the Sox - including his 300th - while May retired. Nice miss. In the meantime Rudy finished with a record of 152-156 with a 3.46 ERA, 87 complete games, 24 shutouts, and 12 saves. In the post-season he went 0-1 with a 3.66 ERA in six games.

May returned to California after playing where for years he was a sales rep for Arco. He then may or may not have opened his own service station in the Fresno area where he currently resides. 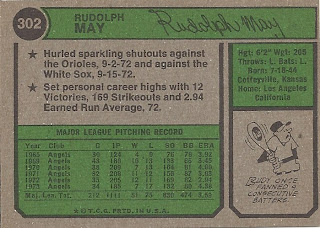 Rudy had a thing with consecutive shutouts. He also threw three in a row in '73 before he got hurt. Those nine consecutive fans mentioned in the cartoon happened in A ball in '64 and were a record when it happened. While Rudy was with the Angels in the off season he worked as a salvage diver, which is definitely up there with the more interesting non-baseball pursuits.

In music, in '73 Jim Croce's "Time in a Bottle" took over the number one spot in the US. It was his last number one hit as Jim had been killed in September in a plane crash. At his death his first and second albums were still climbing in the charts. He was only 30 when he passed away.

The starting pitcher gets help from a reliever in the hook-up: