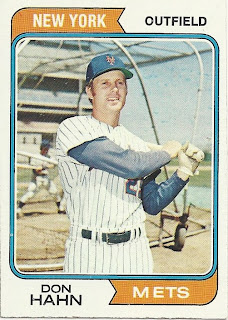 So in '73 first there was Willie Mays. Then there was Rich Chiles. Then there was Don Hahn. Willie got hurt, Chiles just wasn't very good, and so in June Don got recalled from Tidewater to play center field. He was doing a pretty good job defensively and hitting in the mid-.260's after he took over and then - boom! - the wall came down. Or The Stork came down, or over really. In July Don and George "The Stork" Theodore were chasing down a fly ball hit by Ralph Garr of Atlanta at full speed when they collided. It was pretty ugly and while The Stork got the worst of it Don was so banged up he had to throw the ball in left-handed (he was a righty) and then missed a couple weeks. But when he returned he was still the number one guy in center since while Willie was back he really just couldn't field that well any more. Don got to participate in a very exciting division race and post-season which is why he may be smiling at Shea. I am betting that's Duffy Dyer in the cage behind him. With the washed-out blue sky behind them it looks like a great day to be a Met.

Don was a big deal multi-sport athlete in San Jose and was drafted by the Giants in '66. A commenter on a Mets fan site who grew up with Don indicates he was a hood in high school which has always struck me as funny for a light hitter but I'm just stereotyping. His senior year he threw a no-hitter and hit .523. He started things off in Rookie ball that summer and then spent the next two years in Single A ball, hitting .281 in '67 and topping out power-wise in '68 with nine homers and 69 RBI's. After the '68 season he was left unprotected so the Expos grabbed him in the Rule 5 - not the expansion - draft and in '69, after making his debut up top, he spent the season at Triple A Vancouver where he hit .268. In '70 Don played most of the season in Montreal, adding a .374 OBA to his listed stats in his few at bats. By then he was considered a defensive specialist. Late in spring training of '71 he was traded to the Mets for Ron Swoboda and Rich Hacker.

In New York in '71 Hahn pretty much picked up where he left off in Montreal as a defensive sub and occasional starter behind Tommie Agee in center field. The next season NY got Willie so Don was pushed back to Tidewater where he had a good year, hitting .282 with a .369 OBA. Then in '73 he was going about the same - .274 with a .382 OBA - when he got called up. He got lots of time in the post-season and hit .239 in 12 games. Then in '74 it was all NY as Don eked out a bit more starting time in center than Dave Schneck. He hit .251 with a .328 OBA. After the season he and Dave, along with Tug McGraw, were sent to the Phillies for Del Unser, Mac Scarce, and John Stearns. After barely playing for Philly he was released, picked up by St. Louis (for whom he also barely played), and then sold to San Diego. After getting in a few games for the Padres he was released at the end of the season. He then hooked up with the Giants and for them played two seasons at Triple A Phoenix where he hit quite well - .303 and .293 - and put up a combined OBA of about .390. Then he was done. Don hit .236 up top with a .319 OBA. The '73 season was his only post-season action.

Hahn got involved in California real estate while still playing and there are several indications that he made a career out of it once he stopped. It appears he settled in that field back around the San Jose area. 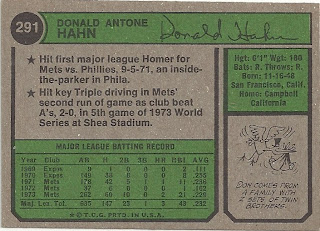 Don's homer in the first star bullet was the first inside the park one hit at Veterans Stadium. Each of his brothers apparently played at some level of professional or semi-pro baseball.

No music news today but I do want to share the below: 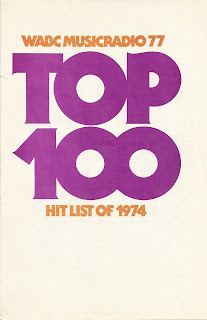 Every year back then WABC, which was New York's biggest AM station for a bunch of years, would publish its top 100 hits for the year. It would then play them exclusively from midnight Christmas Eve until midnight New Year's Eve. A few years earlier it was a great time to listen to music because the hits were quite good. That pretty much ground to a halt in '74 when popular music really hit the skids, at least in my opinion. Here are the top songs so you can see if my judgement is accurate: 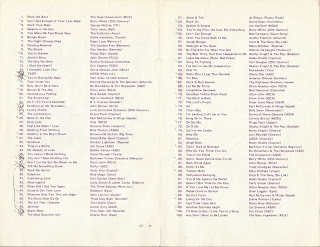 So there you go. You will probably have to click on it to clearly see all the songs. While not an exact match the WABC lists tended to correlate pretty well with Billboard's list. While there is some good stuff and Elton John was still rocking back then, a whole lot of this music is really quite forgettable. But I still wanted to share it.

So again these two guys faced each other in the '73 Series. Plus Vida and Don must have the shortest combined consecutive names of the set: