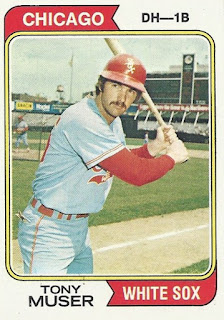 For a change we have a player photographed at Yankee Stadium. This time it's a White Sox and a guy who backed up my boy Dick Allen at first base for three years. In '73 Tony here actually got credit as the starter since he put up a few more at bats at the position due to Dick's injuries. It would be Tony's only season as a regular in Chicago and he did pretty well with his .285 average although he wasn't nearly the power guy Mr. Allen was. Like the subject of two posts ago, Mr. Muser would go on to have a much higher profile in his later professional endeavors than he did as a player.

Tony Muser was a Cali kid who went to San Diego Mesa College, a two-year school, to play ball. He was drafted by the Giants in '66 but shot them down. He was then drafted and signed by the Red Sox in '67 and that summer put up good offensive numbers in A ball, playing first base. In '68 he missed a bunch of time for military duty and returned to put up a good average but was a little lighter in the power department. In '69 he moved up to Triple A, did a bit better with his RBI totals, and got into some games for Boston. Ironically around this time all the scouting reports mentioned that Tony had to work on his defense. '70 was spent exclusively at the Triple A level and then prior to the '71 season he was traded to the White Sox with Vicente Romo for Duane Josephson and Danny Murphy.

Muser spent the bulk of '71 at Indianapolis, normally a Reds franchise, and put up similar numbers to his past couple seasons. In '72 his scouting report indicated his excellent defensive skills so he obviously did some work in that area. He began the year at Triple A Tucson and then moved up to provide some late-inning support at first for Allen. In '73 he got all that extra time and the following year worked off the bench and did DH work until Allen decided to "retire" with a month left in the season. In '75 Dick got sent to Atlanta - on his way back to Philly - and Tony shared starting time at first. But after batting .243 with six RBI's in 110 at bats he was traded that June to Baltimore for Jesse Jefferson. Tony revived his stroke for the O's, batting .317 the rest of the way, now as a reserve for Lee May. In '76 he hit a career high in at bats (326) and games (136) as May did a bunch of DH work. But Tony hit only .227 with zero power and with the arrival the next year of Eddie Murray he was back on the bench, also playing some in the outfield. Released prior to the '78 season, he was picked up by the Brewers and spent most of the season at Triple A Spokane where he hit .293 around a couple at bats up top when Cecil Cooper got hurt. In '79 Tony split the States to play a year in Japan and in his final season as a player put up a sub-.200 average. He hit .259 for his career and was a .284 hitter in the minors.

After Japan Muser returned to the Milwaukee system to manage. He was an immediate success, winning his league championship in Class A ball in '80 and getting to the championships again in '82 when he was in Double A. He managed in the minors for the Brewers through '84 and then was a Milwaukee coach up top from '85 to '89 and then returned to the minors, this time Triple A, to manage in Denver. He remained there through '92. In '93 he began a gig coaching for the Cubs. That lasted through mid-'97 when he was hired away to manage the Royals. Tony went 317-430 for KC until released in 2002. From '03 to '06 he would be bench coach of the Padres. He then managed in the San Diego system in '07 and since 2008 has been a roving minor league instructor. His record in the minors is 611-564. 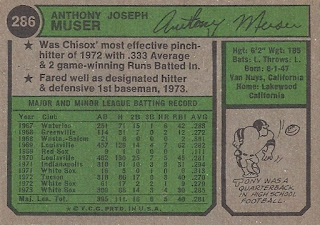 These are pretty blase star bullets but I guess they do the job. Tony played high school ball in Lakewood but I can't get a handle on his stats there. In '86 he was badly burned in an explosion at a Brewer's facility and had to have extensive skin work. He has since been a regular visitor to burn units nationwide. He also has a baseball school he runs with his son. It is linked to here.

In the US and UK two new number one songs arrived in '74. "Kung Fu Fighting" by Carl Douglas took over up top in the States, surprisingly - at least to me - over two months after it had done so in the UK. On THAT side of the pond, Barry White hit the top with "You're the First, the Last, My Everything." Besides deep-voiced love songs, Barry specialized in long song titles. For a little bit of - understandably - unknown trivia about Mr. White, one of his first bits of published recording he wrote was on a '45 one got from a cereal box. For those whose memory goes back that far, Barry wrote a song sung by the Banana Splits, or whoever actually sang the songs for that eponymous Saturday cartoon and variety show.

Muser and Smith both developed in the Red Sox system but Tony barely played there up top so we have to look elsewhere:

We will get to Andrews later when we discuss the Series cards.
Posted by wobs at 11:59 PM