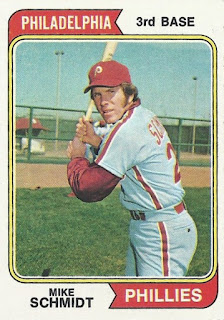 Well this is nice. After a pretty dry run, we get the second Hall of Famer in four cards and that doesn't even count the guys detailed on the Giants team card. Mike Schmidt shows us his stance on his last card sans mustache at a site that frankly has me mystified. He is in a road uniform so that can't be a Phillies bullpen cart behind him. That would leave either Riverfront or Busch but they were both turf fields and Mike is standing on grass. So I'm guessing it's a spring training shot. Wherever it is Mike looks a tad pained which was how the '73 season must have affected him: lots of strikeouts, lots of boos, a sub-.200 average, and not enough power. But that would all change fast.

Mike Schmidt came out of Ohio and went on to play ball at Ohio University. There he was twice an All-American shortstop where he ironically had a tough time breaking into the lineup his freshman year. But incumbent Rich McKinney - who went on to play for the White Sox, among other teams - got drafted and Mike put up some good numbers in local summer ball. In his three years on the OU team he hit .326 with 27 homers and 98 RBIs in 386 at bats and in '70 led them to the College World Series. In '71 he was drafted and signed by the Phillies and that summer played Double A ball at Reading, sticking to shortstop and displaying good power for that position but a lot of K's and not enough average. After a winter in PR he went to Eugene, a Triple A team, played mostly second, and boosted his offensive numbers significantly. By the end of the season he was up in Philadelphia.

After the '72 season the Phillies traded incumbent third baseman Don Money to the Brewers and handed Schmidt the job. It was a tough first year but manager Danny Ozark was a fan and stuck with him. Ozark was rewarded in '74 when Mike flirted with .300 much of the season, led the NL in homers, and nearly doubled his walk total, rendering his high strikeouts pretty much moot. He also made the first of what would be 12 All-Star teams. Mike would lead the NL in homers for three consecutive seasons and not coincidentally his arrival helped propel the team from division doormat to division winner by '76, the last of those seasons. That year he also acquired what would be the first of ten Gold Gloves - nine consecutive - at third base. He did an excellent job on turf and was a specialist at barehanding chops to the bag. When added to his defensive work, his offensive show indicated a pretty complete player. Besides leading the NL in homers eight times, he also led in RBIs and walks four times, OBA three times, and slugging five times. After the three division winners from '76 to '78, the '79 team lost out to the Pirates but Mike set new highs in homers - 45 - and with 120 walks. But the best was yet to come.

1980 would be the year of third basemen. George Brett flirted with .400 most of the year and Schmidt ratcheted things up with 48 homers and 121 RBIs to win his first MVP award. The two would meet in the Series and after a brief slowdown in the NL playoffs against Houston, Mike resumed his hot hitting putting up two homers and seven RBIs in the six games with his .381 average for the winners. Then in '81 he had probably his best offensive year with 31 homers, 91 RBIs, and career highs in average (.316) and OBA (.453) even though a third of the season was wiped out by the strike. Those stats got him his second MVP. He would put up another seven excellent seasons including '86 when he won his third MVP with a .290 average, 37 homers, and 119 RBIs. The award was even more meaningful for him as the year before he had no fun in a season in which he was moved to first base. Early in the '88 season Mike had an injury to his rotator cuff that significantly hurt his ability to both hit and field. Ultimately that injury led to his retirement early in the '89 season. He finished with a .267 average, 548 homers, 1,595 RBIs, and a .380 OBA. He also stole 174 bases and added six Silver Sluggers to his awards total. Defensively he is third all time in assists at third base. In the post-season he hit .236 with four homers and 16 RBIs in 36 games.

Schmidt has had a moderately public profile since he finished playing. He coached for a couple seasons and from 2004-'05 managed in the minors. He also did some broadcasting for a season. Most of his energy has been spent on various promotions and activities for multiple sclerosis research. 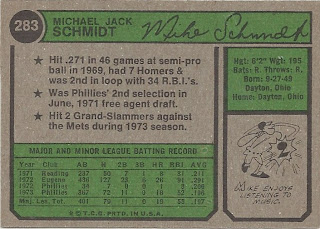 Mike's first star bullet encapsulates the numbers that got him onto the OU starting lineup. Regarding the cartoon I remember an article in the first issue of a magazine called "Inside Sports" that partly profiled his love of model trains as well.

On December 2, 1973 The Who, still on their "Quadrophenia" tour, trashed a Montreal hotel room and got thrown in jail. They got out after agreeing to pay $4,000 in damages. The night in the suite with the bars led bassist John Entwistle to write the song "Cell Block Number 7."

This is an interesting hookup: