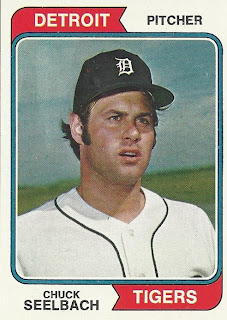 The subject of the last post, Don Hahn, was badly injured in '73, but it wasn't a career-killer. Unfortunately for this guy, his '73 injury was substantial and this would be his final card and he'd only had one before this. Chuck here got a rotator cuff tear that never fully healed. After a nice year in '72 in the Tigers pen he was all ready for a long stay in baseball but it just didn't work out that way. Here he looks a little wistful somewhere in Kansas apparently, with miles and miles of green behind him.

Chuck Seelbach was a prep school kid in Ohio, attending The University School outside Cleveland, where he was a big athlete. He graduated in '66 and then went to Dartmouth where he concentrated on baseball. His senior year in '70 he helped pitch - with Pete Broberg - Dartmouth to the CWS by going 4-1 with three shutouts. Upon graduating he was drafted by the Tigers in the first round (while he was at Dartmouth he was drafted by both the Nats and the Cubs). In Triple A the rest of the summer he put up a nice ERA as a spot starter and reliever. Then at that level in '71 he had a 12-2 record in 18 starts and a bunch of relief appearances. In '72 he made Detroit's roster out of spring training and in John Hiller's absence assumed the closer role while helping his club reach the playoffs. He would have a tough post-season against Oakland - a couple runs in an inning of work - and when he returned in '73 he was barely out of spring training when he got hurt. He did a little rehab work back in Toledo but when he returned to Detroit for '74 he couldn't throw without pain and after a few games he was done. Chuck finished with a 10-8 record, a 3.38 ERA, and 14 saves.

After playing Seelbach got a teaching degree and returned to his old high school where he has taught history for over 30 years. Sort of a nice round trip. 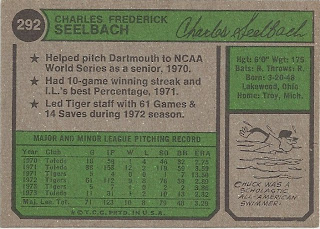 Chuck is still on Dartmouth's top ten list in baseball for career strikeouts. He was All-Ivy in both his junior and senior years. He swam in high school and in '65 was the national champ in the 100 butterfly and was on the runner-ups in the 200 medley.

In '73 two number one songs debuted in the top spot. Charlie Rich's "The Most Beautiful Girl" hit in the US while Slade's "Merry Xmas Everybody" was the seasonal chart topper in the UK. Slade was pretty big back then over there as a sort of glammed-up heavy metal group, but they never found similar success here. On the same date Aerosmith got a TV gig for the first time performing "Dream On" on American Bandstand.

I get to use the Mets' big lumber guy on this one: