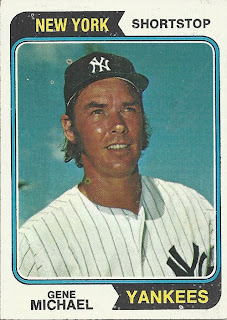 It's been a long time since I've seen this guy without white hair. Gene Michael has been affiliated with the Yankees for a long time now so locally he pops up on the YES network enough times that he gets seen pretty regularly. Back in '73 he was enjoying his last season as a regular before the kids took over his position. During the year he was involved in a nasty fight with Carlton Fisk. While Gene was squaring to bunt, Thurman Munson took off from third in a squeeze play in Boston. Michael missed the pitch and as Thurm chugged in, Fisk pushed Michael out of the way to get to Munson. He got him twice, first with the tag and then with his fist. Michael didn't like being shoved so he started throwing punches, as did Munson. Ironically the two catchers were thrown out of the game while Gene here, who probably landed the most punches, stayed in. That kind of ability to skirt trouble must have helped him in later years working for Steinbrenner.

Gene Michael grew up as a basketball star and occasional baseball player in the Akron/Kent area of Ohio. He went to Kent University - also attended later by his buddy Munson - on a hoops scholarship and got a degree in physical education. During his time at Kent both the Pistons and the Knicks showed interest but fate stepped in when on a whim Gene attended a local Pirates tryout and ended up being offered a contract on the spot. Big and rangy with a great arm, he was signed in '59 and started things off in C ball that summer by hitting .227. He remained at that level in '60 but his average dropped so '61 saw him down in D ball. There he hit .324 and that got him promoted to B ball in '62 where he returned to his old tricks and hit .215. The next year his team moved to A ball and Gene hit above .300 again - go figure - which put him on the Pittsburgh radar. That season he also pitched over 50 innings as the Pirates wanted to see what his arm could do on the mound (what it did was about a 6.70 ERA). Back then he began being perceived with Gene Alley as the heir up top. The next three seasons he spent at Triple A as Alley won the gig, generally posting pretty low averages, although in '66 he did hit .289 in a bit over half a season. That finally got him a late look up top that year that was a bit inconclusive. When Maury Wills became available for their third base job, the Pirates sent Gene and Bob Bailey to LA to get him.

In '67 Michael was a 29 year old rookie. LA took him and Bailey to fill in the holes in the left side of the infield but they both pretty much bombed and the holes became holier. Gene only hit .202 and put up a pretty significant number of errors so the Dodgers went back to the drawing board and sold him to the Yankees for $50,000. Around then Gene actually played a summer of semi-pro hoops in the off-season - I guess he was keeping his options open - but NY was pretty desperate back then for infield help and even though Gene did almost nothing with his bat in just a bit over 100 plate appearances in '68, the Yankees were impressed enough with his arm that they sent off their incumbents at short - Tommy Tresh to Detroit and Ruben Amaro to the Angels - and handed Gene the gig in '69. He responded well, improving his fielding, and posting an aberrational .272 average. He retained the starting job through '73, although he never approached his '69 average, earning his "Stick" nickname along the way. In '74 he backed up Fred Stanley and Jim Mason and in '75 he was released and picked up by the Tigers for whom he backed up Tom Veryzer. After being dropped by Detroit after that season the Red Sox of all teams signed him essentially so that he would be on a Major League roster for ten seasons and thereby get his pension. That was very nice; I wonder where George was then.

Michael finished with a .229 average. He returned to the Yankee organization, getting a coaching job up top from '76 to '78. In '79 he managed Triple A Columbus to a league championship. In '80 he was named GM which he kept mid-way through '81 when he became one of George's revolving door managers. He managed 82 games that year and was replaced by Bob Lemon with about a month left in the season. Then in '82 he replaced Lemon for 86 games until he was booted. He then split time between admin and coaching duties until in '86 he left to manage the Cubs. He did that through most of '87 - his career managing record up top is 216-200 - and then returned to his old roles in NY. He returned to the GM position from '91 to '95 where he made some nice moves - he drafted Derek Jeter for one - and since then has been director of scouting. 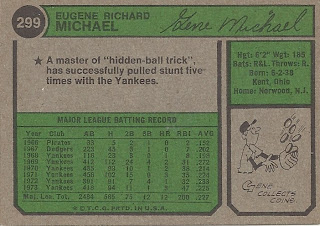 Just one star bullet. The hidden ball trick is just that, the schoolyard trick of hiding the ball and tagging an unaware runner while he's off the base. Gene got poor Vic Harris of Texas on that one in '73 and employed it at least five times successfully during his career. I guess in his later professional life he collected players instead of coins.

Catching up in the music world, on December 24, 1973 Doobie Brothers guitarist Tom Johnston was busted for - what else - carrying doobies at an airport. The group was touring to support its "What Were Once Vices are Now Habits" album. I guess old Tom adhered a little too closely to that mantra.

This one will be all AL, courtesy of those wonderful trades the Indians and Yankees cooked up in the early '70's: