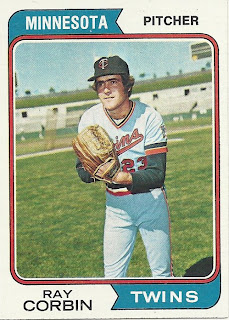 So this is going to be one of those posts about a pretty anonymous guy who stays pretty anonymous. In a couple hours I have been able to find almost nothing about our friend here from before, during, and after his career. I remember as a kid the Yankee announcers would point out how tall he was but that's about all I can regurgitate so this one is going to be just by the numbers and the absolutes. The first of the latter set is that Ray here is in Oakland in a posed shot that gives us a pretty good glance at his near-unibrow, although that feature was much more highlighted in the '72 set. If this photo was taken during the '73 season Ray should have been enjoying himself. Of his 51 games that year seven were starts which means he threw over 100 innings in relief in 44 games and recorded 14 saves as the closer. That's a pretty good season which is why I'm surprised there's not too much literature out there on him.

Ray Corbin grew up in Live Oak, Florida, where he attended high school out of which he was signed by the Twins in '67. That year and most of '68 he pitched in Rookie ball, splitting time between the rotation and the pen. In '68 he also threw in A ball a few games. The next year he had a nice season at that level for two different leagues and pitched almost entirely as a starter. Then in '70 he put up good numbers in Double A ball which allowed his promotion in '71 to Minnesota. In '71 despite a high ERA and some control issues he had a generally good rookie season that included eleven starts. The next year he upped his starts, improved his control, and lowered his ERA substantially. After his fine '73 things seemed to be rolling pretty smoothly. After winning his final five decisions in '73 Ray won his first five in '74 and by late June was going great guns. He then took a shot off his pitching hand, missed a bunch of games, and went 2-6 the rest of the way with an ERA around 7.00. In '75 things got a bit worse when he was diagnosed with bone chips in his pitching elbow and had a season-ending surgery to repair them that August. Ray took through '76 spring training to recover and when the season kicked off he was opted to Double A where after a couple games he was released. Ray went 36-38 up top with a 3.84 ERA, 12 complete games, three shutouts, and 17 saves.

In 1991 when the Twins were on their way to a Series title, Scott Erickson was having a pretty good run consecutive victory-wise. Since at that time both Corbin and Bert Blyleven had the franchise record Ray's name was dragged out for the first time in many years. Back then he was and for a while had been a gym teacher at a junior high school in the Napa area of California. I would imagine then that he took some time to get a teaching degree and eventually got that gig. There is still a Ray Corbin with the same first name listed in that neck of the woods so it is entirely possible that he is still at it. 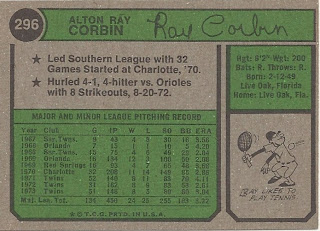 A lot of noise, including on the back of Ray's '75 card, has been made about Ray's three straight seasons ('71 to '73) of eight wins and 83 strikeouts. So Topps blew that last stat on this card on the '73 line. In '72 Ray also had 27 consecutive innings of shutout ball. I guess the tennis came in useful in his later life as a PE guy.

I missed a big music item yesterday. On that date in '73 Bobby Darin passed away from a heart condition. He was only 37. Bobby's big hits - "Splish, Splash", "Mack the Knife", and "Under the Sea" - were big sellers in the late Fifties and early Sixties. In '74 new number one songs appeared in both the States and the UK. Here Harry Chapin's "Cats in the Cradle," the ultimate guilt song for any dad, began a one-week run at the top. In the UK another holiday-themed song took over: "Lonely This Christmas" by a group called Mud. I'd never heard of this one so I just checked it out on YouTube. It's a sort of doo-wop song sung by a guy who looks like Randy Newman pulling a fast one. It's pretty funny - although I don't think intentionally so - and is linked to here.

Some '73 trades help in this hook-up: