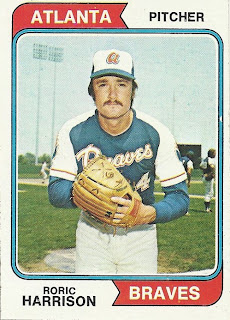 Roric Harrison unveils a mustache on this card at Shea. Roric has a passing resemblance to Peter Sellers when he played Inspector Clouseau in the Pink Panther movies. His 'stache would come and go on his cards and when it reappeared in '76 it was big and bold which seemed more suitable than this wispy thing. A friend of mine went to this guy's son's wedding a few years ago, so I have a very distilled personal relationship to this player. It shouldn't be a big deal to anybody - it's not a big deal to me - but I like to throw these small musings out there in the hope they make the blog more interesting. Probably not. That looks like Gary Gentry and Frank Tepedino behind Roric and maybe Wayne Garrett taking infield.

Roric Harrison was born in LA and went to Westchester High School down around there. When he finished he was signed by the Astros as a free agent. He spent the summer in Rookie and A ball but had a tough time control-wise and threw up a pretty high ERA. He split '66 between a couple A teams where the control got much better but the other numbers didn't. After missing just about all of '67 for military duty he returned in '68 to go a combined 5-15 between Double and Triple A (Topps has him at 2-4 at Triple A Oklahoma City while baseball-reference has him at 4-10; given he was a starter back then, the latter record seems more likely). In '69 Roric got hurt in his shoulder and back and missed pretty much the whole season. During his recovery he was traded to the Seattle Pilots with Dooley Womack for Jim Bouton. For the Pilots/Brewers Roric stayed in Triple A and had a tough year getting back in shape. He was then sent to the Orioles with a guy named Marion Jackson for Marcelino Lopez. In '71 the magic of the O's system fell upon Roric, taught him something resembling a forkball, and helped guide him to produce by far his best season: 15-5 with a 2.81 ERA. The next spring he made the Baltimore staff.

Finally up top at 25, Harrison had a nice debut for the O's. Almost exclusively a starter in the minors he worked out of the Baltimore pen in '72 and added four saves to his listed stats. That November he was then part of a big trade that sent him, Davey Johnson, Pat Dobson, and Johnny Oates to the Braves for Taylor Duncan and the coveted Earl Williams. In Atlanta Roric kicked things off in the pen, then moved into the rotation, grabbing 22 starts and producing most of his decisions. Although his ERA was a tad high he had one of the better records on the staff. In '74 he was strictly a starter but his ERA continued to climb and his record more than reversed itself as nagging back issues limited him to 20 games. In '75 he split time between relieving and starting in 15 games before he was traded that June to the Indians for Blue Moon Odom and Rob Belloir. While he got moved into the Indians rotation the numbers really didn't get much better and just prior to the start of the '76 season Roric was sent to the Cards for former Met Harry Parker. St. Louis sent him to Triple A Tulsa but he only got in 15 games before he injured his elbow, requiring an operation. After being released in spring training the next year Roric hooked up with the Tigers and again spent the season in Triple A. His numbers that season were actually quite good - 9-5 with a 3.29 ERA and 11 saves - and he was supposed to go up in August to take Mark Fidrych's spot on the Detroit roster after The Bird got hurt. But he pulled a muscle and instead a guy named Jack Morris took his place, setting in motion his great career. In '78 Roric was picked up and dropped by the Pirates and then hooked up with the Twins. He put in a bunch of games in relief for Triple A Tacoma and even got in a couple up top. At the end of the season he was released, ending his playing career. He finished with a 30-35 record, a 4.24 ERA, 12 complete games, and ten saves.

After he finished playing, Harrison returned to California. For a number of years he has been the head of new business at a company called Altair Global that specializes in relocating people and whole companies both domestically and globally. 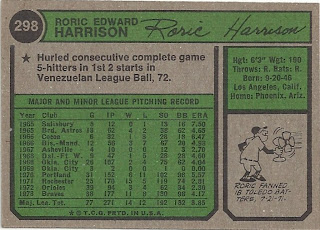 Roric has a crowded card back like Hal Breeden did and just gets the one star bullet. The cartoon is a lot better and that season he was pretty much the jewel of the O's minor leagues.

On this date in '73 Elton John had his concert picked up on BBC radio live. He was touring for his very successful double album "Goodbye Yellow Brick Road" and the set ended with a big blow out of "Saturday Night's Alright for Fighting."

Roric did some traveling so let's see if it helps:

I don't normally post on weekends so to everyone that celebrates it, Merry Christmas.
Posted by wobs at 11:59 PM