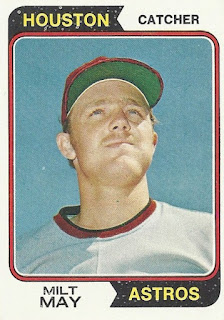 Wow, another one? We are in the midst of an onslaught of these non-Traded traded cards, this one being the flip side of one of Jerry Reuss from many posts ago. Milt May is smack dab in the middle of his last season as Manny Sanguillen's backup and is the third - after Dave and Carlos - of what will be five Mays in this set. Plus the guy whom he took over from was Jerry May. And Milt wasn't related to any of those guys. '73 would be his most active season to date. He got a bunch of early-season starts when Manny moved to fill his late buddy Roberto Clemente's spot in right field. Then when that experiment failed, Milt was relegated back to reserve. But he was headed to Houston to be the starter again so maybe the looking off yonder look is being thoughtful about that. He also looks like he's about to cough up his chaw.

Milt May was born in Gary, Indiana - ugh - and moved to Florida as a kid. He was a shortstop in high school and was drafted in '68 by the Pirates. Expecting to play third the Pirates instead moved him to catcher right away and he kicked off his first season in Rookie ball at that position. The next year he moved to A ball and put up pretty good numbers offensively - .289 with 11 homers and 57 RBI's in 301 at bats - and began displaying both an excellent ability to work with pitchers and a pretty good gun. That year after a big power display in a couple games the opposing manager had Milt plunked twice in the same game. That manager was his dad, Pinky May, who had been a third baseman for the Phillies and then a long-term minor league manager. Then in '70 Milt moved up to Triple A with better power. After a couple games in Pittsburgh that season he was in the majors for good.

Manny Sanguillen had beaten May up top by a couple seasons and with his excellent average would hold on to the starting job. But Milt did nice work as the back-up guy and despite limited at bats would hit for a better average than most other starters. His timing was pretty good post-season-wise though as Pittsburgh went to the playoffs each of his first three years. Milt even won Game 4 in the '71 Series with a pinch hit single to drive in Bob Robertson. After the '73 trade he moved to Houston to succeed John Edwards as the number one guy. It was a pretty successful transition as in '74 he hit .289 while leading NL catchers in fielding. In '75 his average fell to .241 but he led the NL in pickoffs. He also hit the three-run homer that year that scored Bob Watson as the millionth run in baseball history. After that season he was traded to the Tigers - he got a legit Traded card that year - with Jim Crawford and Dave Roberts for Gene Pentz, Leon Roberts, Terry Humphrey, and Mark Lemongello.

May's welcome to the AL was a little severe. After starting a few games he broke his ankle and missed the rest of the '76 season. He returned to be the number one guy in '77 and '78 but in the latter season lost some starting time to Lance Parrish. After beginning the '79 season in Detroit Milt was sold to the White Sox where he split the catching the rest of the year with Bill Nahorodny. At the end of the season he left and went to the Giants as a free agent. Back in the NL Milt's hitting improved quite a bit and he would be the number one San Francisco catcher for three seasons. He peaked in '81 when he hit .310 with a .376 OBA, both career highs. In '83 Bob Brenly replaced him as the starting guy and Milt was traded back to Pittsburgh for Steve Nicosia. After a season and a half of back-up and pinch hit work, Milt went unsigned and he retired. For his career Milt hit .263 with 77 homers and 443 RBI's. In the post-season he hit .300 with two RBI's in four games and as a catcher he is in the top 100 of throwing out base stealers.

May took a little time off before returning to coach in the Pittsburgh system. By '87 he was up top as Jim Leyland's hitting coach, a gig he kept through '96. He then coached for the Marlins ('97-'98), Tampa ('99), and Colorado, where he also scouted ('99-2001). Later in '01 he returned to the Pittsburgh system as minor league hitting coordinator. After a couple years there he returned to Florida where he owns and runs a marina with his son. The marina has a site through Milt's wife's real estate agency and is linked to here. 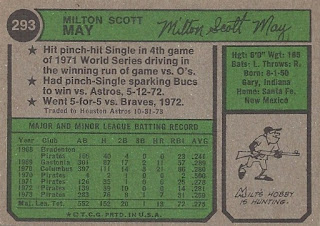 Milt has some star bullets that focus on his hitting. Moving from Gary to Florida must have been a welcome change. He was traded on Halloween.

That these guys played on the same team makes this exercise short: