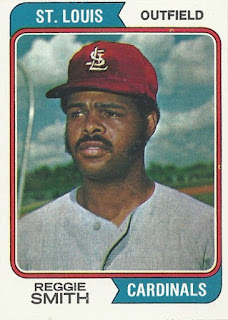 Ah. We haven't seen one of these in a while: the non-Traded traded card. Reggie Smith looks concerned. Maybe because he wasn't the other Reggie!, but no, this guy always seemed pretty content in his own skin. Maybe because even though he'd just put up another awfully nice season, he was tired of all the verbal and physical abuse that used to come his way from the Red Sox fans. Add in a bunch of games missed from a torn knee ligament and a locker room smackdown of Bill Lee, normally a friend, and you can see the forehead lines forming. Yeah, that's probably it. Reggie asked to be traded twice during the '73 season and at the end of it he got his wish. He got to leave the land of busing boycotts and go to the land of the arch and the Gibson and the Brock. Despite the shift of latitude it was a great place to be. Just ask Dick Allen.

Reggie Smith was born down in Louisiana and relocated to LA while a kid. There he would play some serious ball eventually producing an all-state high school career in both baseball and football. From his mid-teens he also played on a local team run by a guy named Chet Brewer, a former Negro Leaguer. The team was pretty high profile and Reggie generated lots of interest. After graduating school in '62 Reggie attended Compton Junior College for a year before being signed by the Twins in '63. He'd been an infielder in high school and that summer in rookie ball put up a .257 with pretty good power for a middle infielder. But the Twins left Reggie unprotected and that December Boston grabbed him in the first year draft. in '64, moving around some service duty, he hit .318 with 15 homers and 60 RBI's in half a season as a third baseman in A ball. In '65 at Double A he played outfield and second, hitting .259 with a similar power discount. But in '66 he shot up to .320 in Triple A Toronto for manager Dick Williams and in '67 when Williams took over as Boston's manager Reggie came with him.

Smith had a gun of an arm and was fast and strong and in '67 after starting off at second base - fellow rookie Mike Andrews got hurt in training camp - he was the everyday center fielder as a rookie. He'd been a switch hitter since a teen and although he hit only .246 he set the tone for his batting style: high and away right-handed for a higher average on that side; and low and in on the left side where he was quicker and generated more power. He hit two out in the Series that year and finished second to Rod Carew in ROY voting. In '68 he decided to forgo the whole sophomore jinx thing, leading the AL in doubles and winning a Gold Glove. In '69 his numbers got him his first All-Star nod and in '70 he scored over 100 runs the only time in his career. Then in '71 he had his best season, again leading the AL in doubles and also total bases. But that was also the season of "The Conigliaro Affair."

Smith had for a while been feeling the wrath of the Sox faithful. Similar to Dick Allen's experience in Philly, Reggie had to take to wearing a batting helmet in the outfield to protect him from the metal objects tossed his way. On top of his being black - already a sin up in those parts - there was a perception that despite his steadily improving numbers that Reggie was not a hustler. But in the confines of the locker room all was generally good relations-wise and Reggie's best friend on the Sox was probably Yaz. Prior to the '71 season after continuing a pretty amazing comeback from a horrible beaning, local boy Tony Conigliaro was traded to the Angels. According to Tony's brother Billy, still with the Sox, and the rest of the C clan the trade was made because Yaz and Reggie insisted on it. Billy C called them both out on his supposition at various points during the '71 season and it made for a stressful environment for Reggie in the one place he actually got to relax. While Billy C was traded in '72, a couple nagging injuries pulled Reggie's stats down that year and after the big rebound in average in '73 there was anticipation that he would ask for a raise when his contract came up before the next season, further infuriating fans that thought he only put up better numbers when he had to. That October he went to the Cards with Ken Tatum for Rick Wise and Bernie Carbo.

In '74 a healthy Smith was ready to go in the NL. And he did, hitting .309 with 23 homers and 100 RBI's for the first and only time in his career. Reggie, now in right field, Bake McBride, and Lou Brock produced the first all-.300 outfield since '70 (by the Reds). In '75 he kept the average up but the arrival of Willie Davis meant Reggie sat a little or played some first base and his power stats declined. Then in '76 Willie Crawford arrived, Reggie played everywhere including both infield corners, and he experienced an early-season slump in the final year of his contract. That prompted the Cards to send him to LA for Joe Ferguson and the change of scenery must have helped because he boosted his average 68 points. Then in '77 Reggie led the NL in OBA with a .427 in his first 100-walk season while joining Steve Garvey, Ron Cey, and Dusty Baker in becoming the first foursome on a team to each hit over 30 homers. He returned to the Series that year and the next after a comparable season. In '79 he got badly hurt in an outfield collision with Dusty Baker and missed a considerable part of the season, putting up his worst numbers to date. But in '80 he recovered nicely and though, now 35, he lost some starting time as well as missing games from injuries, he put up a .322 average. In '81 he barely played, not able to get on the field due to reconstructive surgery in the off-season on his right shoulder. He was pretty much exclusively a pinch-hitter and only batted .200. His best hit that year was on a Giants fan who hit him with a batting helmet while he was stretching. Reggie jumped into the stands and wailed on the guy - think Ron Artest - and got suspended for a couple games. But he did finally get to be part of a Series winner that year and then ironically signed a free agent contract with the Giants. After a pretty good season at first base - .284 with 18 homers and 56 RBI's in 349 at bats - Reggie left the States to play ball in Japan. He finished with a .287 average with 2,020 hits, 314 homers - second at the time for switch hitters to Mickey Mantle - and 1,092 RBI's. He hit .234 with six homers and 17 RBI's in 32 post-season games.

In Japan Smith produced pretty good numbers his first year - .285 with 20 homers and 86 RBI's - but trouble with management, fans, and injuries led to a short season. After a partial '84 in which his average slipped to .255 he quit playing at 39. He returned to the States to be LA's minor league hitting coordinator. From '94 to '98 he moved up top as the hitting coach. He then began his own baseball school and returned a few times to coach - in the '99 Pan Am Games, the 2006 World Baseball Classic, and the '08 Olympics. I have linked to his website here and his SABR bio here. 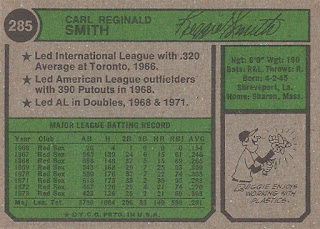 Reggie gets some good star bullets. He was also big in music - he could play at least seven instruments - tennis, and could pilot an aircraft.


Let's bring out an old character to help with the hook-up:

I think everyone knows who "Hawk" is so I'll leave that one alone.
Posted by wobs at 11:59 PM