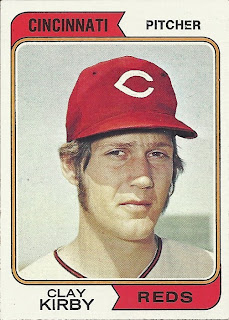 Now is THIS the expression of someone who has just been traded from a doormat to a contender? Certainly not. THIS is the expression of a guy in his fifth straight year of playing for a last-place team while having his worst personal season doing so. The second non-Traded traded card in the last three cards has a mutton-chopped Clay Kirby looking forlorn in his airbrushed new colors. Yeah, '73 kind of sucked for Clay. But it couldn't have been as bad as that line drive he took off of his knee from Joe Torre's bat. Or that special night in '70.

Clay Kirby grew up in and around DC and went to a local prep school called Washington & Lee in Arlington where he was a local star and heavily recruited due to a 95 mph fastball. His senior year he threw a perfect game with 19 strikeouts. In '66 he was drafted by the Cards and had a rough start that summer in Rookie ball put picked things up in A ball. In '67 he served his military hitch and then threw over a strikeout an inning while going 3-4. In '68 he went a combined 12-9 split between Double and Triple A with pretty good ERA's at both levels. Later that year the new Padres snapped him as the 12th pick in that year's expansion draft.

Kirby immediately made the roster in San Diego in the team's initial year and would be their top starter the next five seasons. In '69, despite losing 20 to lead the NL in losses, he put up a pretty good ERA. In '70 the ERA went south although he improved his record by seven games. Not only that but on July 20th against the Mets Clay gave up a run in the first inning on two walks, a double steal, and a groundout. He then threw no-hit ball through the eighth inning when he was removed for a pinch hitter. His replacement on the mound then gave up a hit to the first batter he faced. It was a meaningless game - all Padres games back then tended to be after June - so pretty much everyone was dumbfounded at Clay's removal. That game has since been known as the curse as no Padre has thrown a no-hitter ever. But Clay was a good doobie and didn't complain. Good karma from that may have helped him in '71 when he posted a fine season, becoming the first Padre to record over 200 strikeouts. He also took two no-hitters into the eighth inning that year but each time was left in and couldn't go all the way. '72 was quite good also, although the losing record re-appeared and he missed nearly a month from an elbow injury. Then after the disappointing '73 season he was sent to the Reds for Bobby Tolan and Dave Tomlin. He left San Diego with 52 wins, by far the most of any Padre pitcher then.

In Cincinnati Kirby went 12-9 in '74 with a 3.28 ERA, more than returning to his '72 mode. In '75 he went 10-6 but a return of elbow problems elevated his ERA to 4.72 and kept him out of the post-season. He was traded after the season - in '76 he has a real Traded card - to Montreal for Bob Bailey. For the Expos the elbow rendered his arm toast and he went 1-8 with an ERA that climbed another run before being released. After a comeback attempt back with the Padres - he put up numbers at Triple A Hawaii similar to his Expos ones - he was done. Clay finished with a record of 75-104 with a 3.84 ERA, 42 complete games, and eight shutouts. After playing he returned to the DC area and ran a local fund-raising golf tournament that featured MLB players. He also may or may not have been involved in real estate. He passed away in '91 from a heart attack. He was only 43. 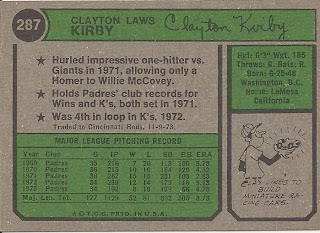 The one-hitter in the first star bullet was the second one mentioned above and was a perfect game through the eighth inning. Topps brings back the tiny print denoting the trade. Clay and Reggie Smith should have hooked up back then to build model cars together.

Thank God for the league changers: