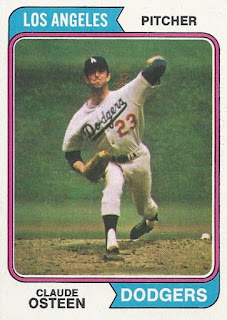 This is a great action shot of Claude Osteen. To view different pitching styles in action, it makes a nice comparison to the Palmer and Nolan Ryan shots from a few cards back. Osteen's money pitch was his curve, Palmer's his breaking ball, and Ryan his fastball. Each photo represents that pitch's delivery quite well. Claude's curveball was a big across the body motion so when he released the ball he was perfectly perpendicular to the plate which we see the initiation of here.

Sadly, the thing I remember most about Osteen's career at this point was his frustrating chase of 200 wins. He was only 34 and had already won 180, so it seemed a no-brainer. Unfortunately that was not the case. But this really short-changes him as a pitcher. And '73 was very representative of Claude's career: 10-4 at the All-Star break, he made the team as he continued to be one of LA's best starters for a team that was just a couple wins and a year away from returning to the post-season. At the end of August he was 16-6 with a 2.79 ERA. But a winless September followed and may have been part of what instigated the trade. Still, it was another very good season for a guy who shone for the Dodgers.So let's fix that now.

Claude Osteen moved around a bit as a kid, settled in the Cincinnati area in high school and there had a huge career. His senior year he was 16-0 with a minute 0.13 ERA and 221 strikeouts in only 103 innings. No wonder the Reds were so quick to jump on him that spring of '57. Claude went straight to Crosley and was actually only 17 when he debuted for Cincinnati that year. He threw very little but did pretty well before spending some inconclusive time in Double A. But the next year he won 19 with nearly a strikeout an inning in a season split between B and Triple A. '59 was nearly all Triple A and though he posted good numbers at that level - 8-12 but with a 2.98 ERA - he couldn't crack the lineup and Claude spent all of '60 sitting on the Cincy bench since the club was out of options for him. In '61 he got some early relief time up top before returning to Triple A for a very good season: 15-11 with a 3.53 ERA. But Claude was now unprotected and in September he was traded to Washington for Dave Sisler, son of George (that must have been tough). 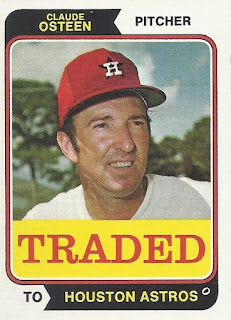 Osteen moved right into the DC rotation after the trade, grabbing three starts the rest of the way. The Senators were a pretty crappy team in the first few years of the franchise's life and though Claude would throw pretty good ball for the team - a few too many hits in '63 though - and record an ERA during that time well better than league norm, all he got out of that was a 17-27 record.Then in '64 his team caught up with him a bit and Claude was able to finally post his first winning MLB record. It sure got him noticed by the guys on the left coast and after that season Claude went to LA with John Kennedy and a bunch of cash for Frank Howard, Ken McMullen, Dick Nen, Phil Ortega, and Pete Richert.

The LA team Osteen joined in '65 had some decent defense and not too much offense. But it had excellent pitching and Claude was brought in as a third starter behind Sandy Koufax and Don Drysdale. The next two seasons he continued to put up premium ERA's but was only three games over .500 during that time. But both years LA went to the Series and Claude put up a sick ERA in his post-season work, winning one ring. But the Dodgers crashed upon Koufax's retirement and the defense got porous pretty quickly so in '67 and '68 - even though he was an All-Star the former year - Claude's ERA was uncharacteristically a discount to the NL average and that latter year he led the league in losses. In '69 he had a very nice bounce, winning 20 for the first time and putting up a career-best seven shutouts. '70 was another All-Star season. In '72 Claude again won 20 with another great ERA; ironically he was not an All-Star in either 20-win season. After this trade he was on the move again.

While the guy for whom Osteen was traded would have a big '74, Claude's experience in Houston was a bit of a discount to that. He pitched serviceably, going 9-9 in 21 starts with a 3.80 ERA and then for the stretch run was sent to St. Louis for Dan Larson, who would throw in a couple years for Houston. The Cards put Claude in the pen where his numbers weren't too great and then released him at the end of spring training the following year. Claude was a big control guy and his walk totals in '74 exceeded his strikeout ones. The White Sox took a flyer on him in '75 and while he did workhorse duty, that 7-16 record was further evidence that his arm was done. That would be his final season and Claude finished 196-195 with a 3.30 ERA, 140 complete games, 40 shutouts, and a save. His post-season numbers were a 1-2 record but with a 0.86 ERA and a shutout in his three games. He had some good moments at the plate and for his career hit .188 with eight homers and 76 RBI's.

As for that "Traded" card, I think it's pretty good. It is a very benign air-brush job and the background looks completely bucolic, like the photo was taken on a farm somewhere.

I had always though that Claude was related to Joel Osteen, one of those huge mega-church preachers who gets tons of airtime. According to an interview Joel gave to Larry King, the two are not related, but boy they sure do look alike. Check out Joel's Wikipedia page. 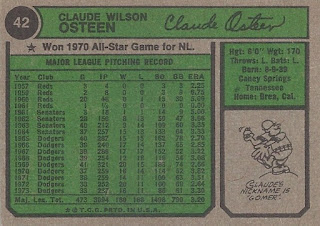 The All-Star game won by Claude was the one in which Pete Rose bowled over Ray Fosse. Yes, Claude's nickname was Gomer. So who was Gomer? For the kids among you, Gomer Pyle was this guy, a sitcom character played by Jim Nabors who was originally a supporting character on "The Andy Griffith Show" and then moved on to be the star of his own eponymous series in which he was an Marine private. 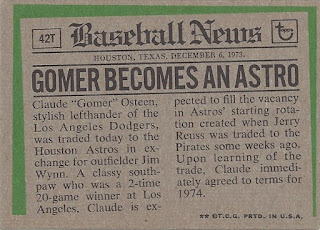 An alternative route would have been through Dick Dietz and Fran Healy. By the way, this was the first Dodgers card of the set. LA is the last team with a card at 42 in. Not so nice.
Posted by wobs at 1:47 PM