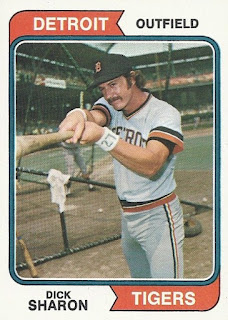 This is the second rookie card in a row. On it, Dick Sharon, a reserve outfielder, does that Ruthian bat-pointing thing at something or somebody off camera. It almost looks like he is giving directions. This is a pre-game batting practice shot at what looks like Comiskey Park. The only reason I am doubtful about that supposition is that all the White Sox we have seen so far have been in away uniforms. Anaheim had an overhang also but I don't think they had bleachers back then. I am sticking with Comiskey because everything looks old. Even the batting cage is broken. '73 was Dick's actual rookie year. Slated to make the team out of spring training, he had to stick in Toledo (Triple A) when catcher Dick Sims went down with an injury and Detroit needed a replacement (Dick should have told them he could catch). He would make it up in May and spend the remainder of the season as the team's fourth/fifth outfielder behind the vets Willie Horton, Al Kaline, Jim Northrup, and Mickey Stanley. Dick was an excellent athlete and a superb defender. He was also, it seems, very protective of his gear: could be have made the number any bigger on his wristband?

Per his card back, Dick Sharon was a big deal athlete at Sequoia High in California. About the only dirt I could get on his baseball career was that he was the first freshman in his conference to win the batting title. Presumably he remained an over-achiever since he was drafted by the Pirates in '68 in the first round. A tough first year in Rookie ball was followed by a better - but still tough '69 in A ball. He got a bit of mojo at that level in '70 when he showed some power and got his average up a bunch. '71 began his military commitment with its missed time but that year he kept his average at its '70 level and then in '72 at Triple A he may have had his best offensive year had he not missed time. After that season he went to the Tigers in a minor league deal.

Despite his weak start, Sharon got his promised '73 call-up and put in some decent outfield time. Another year of reserve duty in '74 saw his average come in on reduced at bats. Following that season he and Ed Brinkman were sent to San Diego for Nate Colbert. For the Padres Dick did his reserve thing, but this time with a sub-.200 average and after that season he was again on the move, this time to St. Louis for Willie Davis. He then got flipped to the Angels and finally to Boston in the deal that made Dick Drago an Angel. His '76 would be spent in Triple A where he hit .232 as a reserve guy. It was his final season Dick finished with a .218 average with 13 homers and 46 RBI's in 467 MLB at bats. In the minors he hit .239 with 56 homers.

After playing Sharon became an avid fly fisherman and led fishing expeditions in the Northwest. At some point he opened his own shop in Montana where he apparently continues to spend his professional time. 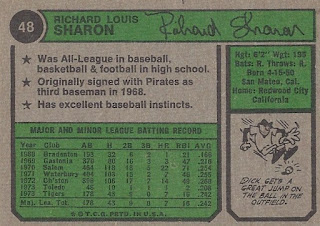 The card back gives mention to Sharon's athletic ability and his defensive credentials in the cartoon. Topps really seems to be reaching with the last star, however. Dick apparently was unafraid to voice his opinion. While his up top numbers weren't great, they weren't bad for just a year's worth of at bats. My bet is his mouth didn't help his career any. MLB back then wasn't crazy about independent thinkers.

Let's take an NL route for these guys:

This is another instance which may be a degree high.
Posted by wobs at 8:12 PM