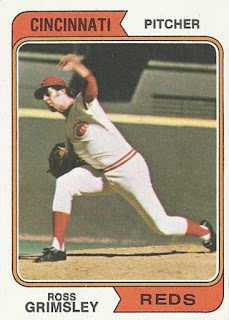 Here is another action shot of a member of the playoff-bound Reds. Here Ross Grimsley appears to be letting loose a curve at Riverfront (thanks Anthony and Jim). He had a nice '73 run through the All-Star break, going 10-5 with a 2.59 ERA. He should have had an even better record but the Cincy bats were strangely silent behind him. But he got them back by cooling off a bit at the end of the year and then had a not great playoff start against NY. Plus, Ross and manager Sparky Anderson did not get along: Ross was a bit too free-spirited for his manager and everyone else running the organization. He wouldn't keep his hair short, he got lucky amulets from witches, he wouldn't bathe when on winning streaks. I guess it was all a bit much for the guys in Cincinnati.

Ross Grimsley was drafted out of high school by Detroit but didn't sign. Instead he went to the brand new Jackson State Community College where he led his team to the first conference championship. He was then drafted by the Reds in the secondary draft of early '69 and this time he signed. A big starter who threw heat, Ross moved quickly through the minors. He went 9-4 with a 3.32 ERA that first summer and in '70 jumped to Triple A where he went 11-8 with a 2.73. By then he began adding an assortment of sinkers to his pitching resume and after a 6-0 start with another sub-3.00 ERA to kick off the '71 season Ross got promoted.

Grimsley debuted with the Reds in May and put together a pretty good rookie season, earning a spot on the Topps Rookie team. He followed that with a better '72 and then had a great post-season, beating Pittsburgh once and Oakland twice. His poor showing in the '73 playoffs probably didn't help his standing in the front office, hence the trade to Baltimore. 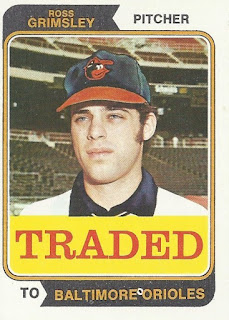 For the Orioles Grimsley grew a 'stache, a big afro, and was accused by Billy Martin, among others, of throwing a greaseball using stuff secreted in the mop on his head. In '74 he won 18 games with four shutouts, a 3.07 ERA, and by far his personal best in strikeouts. On top of that he resumed his excellent post-season work. But in '75 the ERA got elevated by a run and he posted his first losing season, and in '76 things got messy as arm woes caused some missed starts, though he did get his ERA below 4.00 and posted a winning record. After winning 14 in '77 he left via free agency for the Expos.

It all came together for Grimsley that first year in Montreal: his only 20-win season, his only All-Star appearance, and some Cy Young votes. He remains the only Montreal pitcher to win 20 games. From there, though, it was all downhill. His walk and hit totals went up, his ERA would stay well north of 5.00 and he was essentially done after the '80 season. A brief comeback attempt with Baltimore in '82 didn't last and he was done at age 32. His career stats were 124-99 with a 3.81 ERA, 79 complete games, 15 shutouts, and three saves. In the post-season Ross went 3-2 with a 3.24 ERA in nine games and hit .333 with an RBI.

Surprisingly Grimsley became a pitching coach almost immediately after his playing career ended with a bunch of organizations, primarily San Francisco's since '99 and where I believe he currently resides employment-wise.

This is another Traded card that I don't think is too bad. That bird must have been tough to airbrush and the setting is recognizable. I believe it is again Shea, evidenced by the Schaeffer billboard in the background. Nice sideburns too. 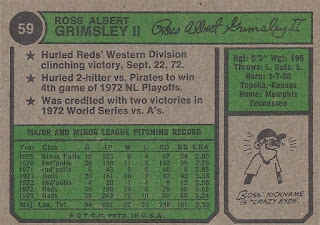 Lots of info about the '72 season, in this case a wise choice by Topps. Regarding the cartoon, Grimsley had/has - dare I say it - beautiful green eyes. A bunch of times he would accentuate the color by wearing turquoise-colored contact lenses. Definitely an odd bird. 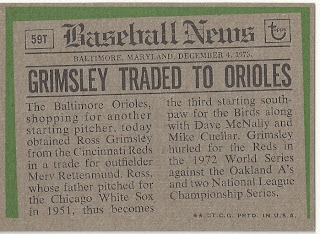 The back of the traded card is pretty prosaic. There were also a few minor leaguers involved in the trade, one being Junior Kennedy, who would go on to do some backup infielding for the Reds and Cubs. Ross' dad put in years in the minors and came up at age 29. He had a decent season but I guess was too weathered to keep on the major roster. He did pitch in the minors through '61 and won 129 games there.

We have an AL hookup this time: