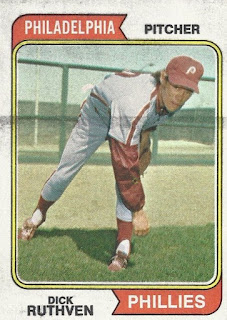 This is Dick Ruthven's rookie card. Dick was a hot ticket. At the top of '73 he was still at school at Cal State - Fresno. While there he set - and still holds - the Big West career ERA record of 1.52. He also set and again still holds his school record for strikeouts with 372. Those numbers helped make him a first round pick by the Phillies in the '73 secondary draft. He went right to the majors for the second half of the season, sliding into the starting rotation of a reviving franchise. And given the shape of the team that year, his initial numbers weren't too bad. Still, this card of Dick's is filthy, like someone tried to put it through a print roller. I know rookies aren't supposed to get any respect but did that apply to their cards as well? Upgrade!

Dick Ruthven was a big deal high school pitcher who would be drafted by Baltimore the summer after his senior year of '69. Dick would pass to pitch for Fresno where he obviously did very well and was then selected by the Twins in the first round after his big junior year. Either the Minnesota money wasn't right (probably, considering the team's owner) or Dick wanted another year at school, but he passed again only to sign with the Phillies the following January. A big kid who threw heat in college, Jim would have some control issues early in his pro career and in '74 he would go 9-13 in the rotation while shaving  a few points from his ERA for a much-improved team. To work on his control, Dick finally saw some minor league action to kick off the '75 season, and in Triple A went 10-12 with a 3.18 ERA and nearly a strikeout an inning while halving his walk totals. He got back to Philly in August and went 2-2 the rest of the way as a spot guy but didn't bring his new control with him. Following that season, Dick continued his interesting transactional history by being traded twice in two days. He initially went to the White Sox for Jim Kaat. He then went to the Braves with Ken Henderson - and Ozzie Osborn! - for Ralph Garr. And I thought the Sanguillen trade was weird!

Ruthven's move to Atlanta seemed to be the perfect cure for his pitching ailments as he opened the '76 season off 10-7 with a 2.68 ERA and very good control to get his first All-Star nod. But right around that time, word was that Braves owner Ted Turner, who could be a prick, made a pass at Dick's wife and then tried to humiliate Dick when the player made the owner apologize. The whole situation made Dick very uncomfortable and it showed in his pitching line as he went 4-10 with a 5.65 ERA the rest of the way that year and 7-13 with a 4.23 in '77, though admittedly neither team was very good. After going 2-6 to kick off the '78 season Dick returned to the Phillies in a trade for reliever Gene Garber.

In his new/old home Ruthven put up some nice numbers the rest of the way in '78 - 13-5 with a 2.99 ERA - to help propel the team to its third straight division title. Another hot start in which he was 6-0 with a 1.65 ERA by early May of '79 was arrested by a shoulder injury that limited his games and effectiveness the rest of the way. But a big 1980 during which he went 17-10 propelled Dick to the number two in the rotation guy behind Steve Carlton for the Series winners. He followed that year with an excellent post-season. He then went 12-7 with a ridiculous 5.15 ERA in the strike season of '81 and earned his second All-Star pick. He led the league in earned runs again so I guess that was the trick. After a .500 season in '82 that included some more missed time but a much better 3.79 ERA Dick had a poor start in '83. That May he was sent to the Cubs for future AL MVP Willie Hernandez.

After playing, despite his bad experience with the Braves, Ruthven settled in Georgia. There he got involved in real estate, initially with his own construction company, and then as an investor. He is the second guy in a row with another major leaguer for an in-law: his twin sister married Tommy Hutton. 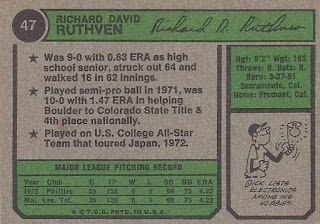 Other future MLB guys on that college all-star team included Ed Bane, Steve Swisher, Warren Cromartie, Rick Langford, Jackson Todd, Alan Bannister, Roy Smalley, and Fred Lynn. It would have made a pretty good MLB team. For the second star, I didn't know college players back then were allowed to get paid to play, so that's an eye-opener. The cartoon's a yawner.

So I won't have to change the colors for this post. Let's see if the trades help to link these two guys up:

Yup. And Kaat and Ruthven both hit about the same clip as well.
Posted by wobs at 8:11 PM