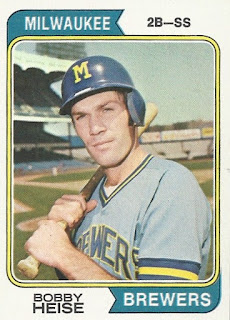 Bobby Heise had the distinction in my little mind (at the time) of being a '69 Met. He also was an everyman infielder for the Brewers. Unfortunately, he is also emblematic of the guys in the initial Topps Traded set, unlike the last two featured: they really didn't impact their new teams very much. Bobby's '73 would be a prelude to that: the arrival of Pedro Garcia, Tim Johnson (both as rookies), and Don Money (trade) all worked to compress his field time considerably that year and his numbers fell pretty hard. And unfortunately for him the rest of he seasons would much more resemble his '73 than his '72. But down the road he'd be a much bigger impact guy, just in a different biz.

Bobby Heise had a dad who was in the military so as a kid he moved around a bit, settling in California for high school. His dad also played semi-pro softball so Bobby's ability to star on the diamond was partly innate. He was signed by the Mets in '66 after a year at a local JUCO and worked his way through their system over the next three years, alternating between second and third base and shortstop. That first summer in A ball was pretty good with a .283 average, 50 RBI's and 28 stolen bases. In '67 at that level  he hit .298 but the RBI and steal totals dropped. That year he also began his military commitment. In '68 he jumped to Triple A where his offense was sort of ho-hum, though he did steal 14 bases. He upped his average at that level in '69 to .278 and bumped his stolen bases to 20. He put in very small amounts of time for the Mets from '67 to '69, hitting around .300, but got shut out the last year from post-season play. Following that year he was traded to the Giants with Jim Gosger - who would later return to NY - for Dave Marshall and Ray Sadecki. 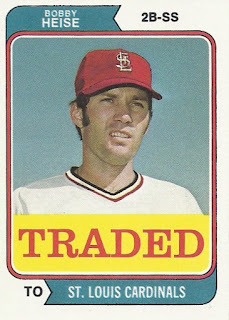 It was in his one full season in San Francisco that Heise hit his personal high in RBIs backing up Tito Fuentes and Hal Lanier in the middle infield. He then went to Milwaukee early in '71. That year the Brewers infield was quite messy and Bobby would be one of four guys to get starting time at short and one of six at third. '72 would be his - relatively - big year playing-time wise as he backed-up Ron Theobold at second and Mike Ferraro at third and put up generally his best offensive numbers. After the '73 season and the trade shown here, for the Cardinals, Bobby would spend nearly all his time in Triple A - where he hit .326 while playing second - before a July trade to California for Doug Howard. There he stayed up top to spell Denny Doyle at second (he hit .267) and then in '75 he moved to Boston for Tommy Harper to spell Denny Doyle at second (.214 but with 21 RBI's in only 126 at bats). After another year with the Sox in the same role, he finished his career with KC in '77. He hit .247 up top and .283 with 76 stolen bases in the minors. While he played on three pennant or Series winners, Bobby never saw any post-season action.

Heise had an interesting post-baseball life. Following his career he returned full-time to Vacaville where he became a police officer (for 26 years) and corrections officer and fought off cancer. You gotta give him credit for his persistence.

In his regular card, Bobby is posed pensively at Yankee Stadium - further imprinting him in my (ok, yes, still small) mind as a New York guy. His Traded card, while obviously airbrushed, is not that bad although it is yet another one of unknown geographic origin. 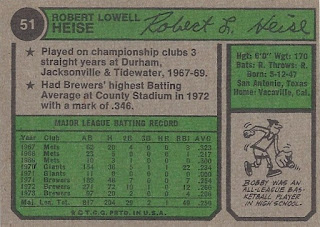 The Mets really did seem to churn them out in the late '60's and early '70's, didn't they? Championship clubs and between Seaver, Ryan, Koosman, etc. some awfully good players. Another multi-sport guy, Bobby grew up in California - his dad was a corrections officer also - and recalled Whitey Hertzog as his favorite manager. Yes, I know that is not a very good segue. 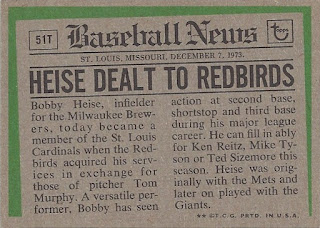 Topps covers the Cards infield pretty well here (Torre was the first baseman but we already know that). Not too much else to say.

Lets use a former NL guy to get these guys together in the AL: