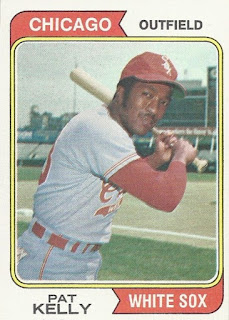 This is Pat Kelly, a speedy outfielder from the '70's, fresh on the heels of his All-Star season, posing somewhere near the visitor's dugout at Yankee Stadium. There were other baseball-playing Pat Kellys (Kellies?) but this guy was the most successful of the bunch, particularly his run opening the '73 season. Pat came shooting out of the box and at the end of May was leading both leagues in hitting with a .441 average. Shortly thereafter he got hit with some shoulder tendinitis that pulled down the average and affected his throwing big time, but he would still produce one of his best seasons. Pat also made everyone's best-dressed list, a pretty scary or cool - depending on your tastes - achievement back then. He is the first guy in this set who had a Hall of Fame running back for a brother and the first one related by marriage to another player who we'll see - God willing - much later in the set. Mr. Kelly brings a tidy bit of trivial baggage to this blog.

Pat Kelly was signed by the Twins in '62 out of Philadelphia where, like his brother Leroy, Pat was a big three sports star. He would then spend the next three years in A ball, even though he garnered well over a .300 average and '400 OBA. He finaly advance to Double A in '66 where he had a big season, hitting .321 with a .430 OBA and 52 stolen bases. '67 was a move up to Triple A where he missed half a season to military work but still hit .286 with 19 steals before his very short MLB debut. In '68 he bettered those numbers at that level to .306 and 38, again missing time, and again playing sparsely up top. After that season he was taken by the Royals in the expansion draft prior to their initial '69 season.

With Kansas City, Kelly moved into a starting outfield spot - predominantly right - pretty much immediately and put up some serviceable numbers. His rookie season of '69 he stole 40 while in '70 he stole 34 while his average dropped a bit due to an elevated strikeout total, though his OBA remained the same at .348. Also, prior to his first KC season, Pat began playing winter ball in Venezuela where he became a bit of a local star. Following the '70 season he and pitcher Don O'Riley went to the ChiSox for first basemen Gail Hopkins and John Matias.

Kelly had a rough start to his White Sox career. He injured his knee during training camp and then spent a bunch of time his initial season in Triple A where he hit .355 before returning midyear to hit pretty well for the big boys. In '72 he continued as the starting guy in right and stole 32. In '74 his tendinitis recurred which affected his field time a bit and his run totals came in though he matched his '73 average. It was also his first season doing serious DH work. '75 was back to nearly all outfield with a bit more power including his Chicago best nine homers. In '76 the arrival of Lamar Johnson at DH and Ralph Garr in right pulled Pat's playing time in a bit and as a precedent to his future, nearly all his starts were against right-handers. Following the season he went to the Orioles for Dave Duncan, who never played for the White Sox.

In Baltimore, Kelly moved with ease into manager Earl Weaver's revolving platoon system, normally working against righties from left field. In '77 he stole 25 while posting 49 RBI's in 360 at bats. In '78 the at bats dropped a bit but he knocked in 40 while raising his average to .274. Pat had been platooning with Andre Mora, who returned to Mexico following that season and in '79 Pat took on a reserve role so his plate time continued to decline. But in '79 he posted a .288/9/25 line in only 153 at bats and then had an excellent post-season. In '80 his average came in but in only 200 at bats he scored 38 runs and stole 16 bases. He would then depart the O's as a free agent , sign with Cleveland, where he did some pinch hit work and presumably got close to his future in-law, Andre Thornton. Pat was released late that summer and after that it was goodbye baseball. He finished with a .264 average with 76 homers, 418 RBI's, a .354 OBA, and 250 stolen bases. In the post-season he hit .333 with a homer and four RBI's in eight games.

Kelly had been a hard liver until becoming reborn in the mid-Seventies and then working hard to spread his gospel by creating prayer groups at subsequent baseball stops. After baseball he took on preaching full time which he did until he passed away of a heart attack in 2005. He was 61. 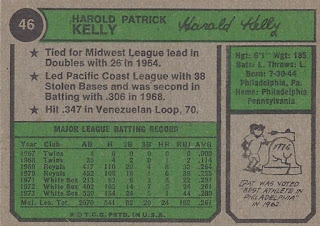 1964 was nice season for Pat. Outside of leading the league in doubles, he hit .357 with 16 homers, 70 RBI's, and 72 walks in only 387 at-bats. In '68 he only got caught stealing four times. Being Philly's best athlete was probably a neat trick. I do not see that his older brother Leroy pulled that off and he went on to be a three-time 1,000 yarder for the Browns. There is a funny bit about Pat while he was in Baltimore. Pulling his preacher thing, he was constantly chasing manager Weaver to "walk with God." Earl's reply was "I'd rather see you walk with the bases loaded."

The Baltimore angle is hard to pass up for these two guys:

Hall of Famers all over the place.
Posted by wobs at 2:48 PM