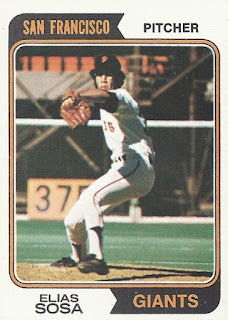 This is a nice action shot of Elias Sosa, another workhorse reliever who put in the innings but did not attain quite the notoriety of Campbell, Hiller, etc. during his career. His most high-profile moment may have been the pitch he served up as Reggie Jackson's second of three homers in the '77 Series game. This is his rookie card. It is taken at Candlestick in what was an awfully good rookie year for this kid. In fact, for Elias personally it was sort of a career apex in that he topped out in games, wins, and saves in '73 and finished in third place for NL Rookie of the Year. And he was no shrinking violet: a cocky guy, Juan Marichal - of all people - had to talk to him about calling out opposing hitters. Plus he's about the only guy I've seen in this set whose glasses make him look more threatening.

Elias Sosa was signed by the Giants in '68 out of the DR and took a while to get on track (he didn't win a game until his third season) in Rookie and A ball. After finally posting some wins in '70 at the higher level, but still toting a fat ERA, he then had a couple good seasons in '71 (as a starter in A ball) and '72 (as a Triple A reliever), a season in which he got some productive late MLB innings and posted three saves. He then broke spring training in '73 as a member of the San Francsisco pitching staff.

Sosa's '74 season was also pretty good as he went 9-7 with a 3.48 ERA in another year of 100-plus innings. But he worked a bunch more as a setup guy that year and his saves decreased to six. Almost immediately following that season he was traded - his '75 card is an airbrush job - to St. Louis with catcher Ken Rudolph for catcher Marc Hill. After being used not too often in mid-season Elias went to Atlanta with Ray Sadecki for Ron Reed and Wayne Nordhagen. While his usage went up with his new team, his numbers really didn't get any better which continued into '76. Then came another trade, this one with Lee Lacy to the Dodgers for Mike Marshall, and the change worked this time for Elias as his ERA dropped by nearly two runs the rest of the way. In '77 he had a real nice season as a setup guy - 2-2 with a 1.98 ERA and a save in 44 games - followed by his first post-season action. But the following January he was on the move again, first in a sale to Pittsburgh, and then just before the season began, in a trade to Oakland with Miguel Dilone for Manny Sanguillen - Elias got his fair share of trades that brought transplants back home - and Mike Edwards.

When done with playing Sosa coached in the minors a bit, including for the Giants organization beginning in '95 though information is sketchy enough I have no idea how long that lasted or where or when else he coached. However, according to his LinkedIn profile he has since 2001 been working for MLB International as a Latin American Coordinator. 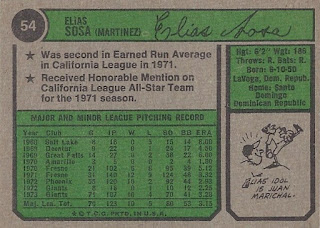 The cartoon gives props to Marichal's kick, so it is one of the few individualized ones in the set. Topps likes to throw around the capital letters ("Honorable Mention") more than even I do.